SNOOPY IS CLEARED FOR TAKE-OFF

Snoopy, the World’s Most Beloved Beagle and the Longest Flying Character in Macy’s Thanksgiving Day Parade® History, Returns to the Sky This November to Celebrate the 50th Anniversary of the Moon Landing and Future Space Missions

NEW YORK, NY – 13 July 2019 – Mission Control … Snoopy is cleared for launch in 5, 4, 3, 2, 1, Let’s Have a Parade™! On Thursday, November 28, 2019, Snoopy, the world’s most beloved beagle, returns to the sky above New York City for the 93rd annual Macy’s Thanksgiving Day Parade®. Celebrating the wonder of space flight, Snoopy, decked in astronaut gear, will launch his new mission in celebration of the 50th anniversary of the moon landing this year and future missions to the moon and beyond. Snoopy is the longest running giant character balloon in the Macy’s Parade and this newest design marks the eighth version of the beloved Charles M. Schulz comic character. 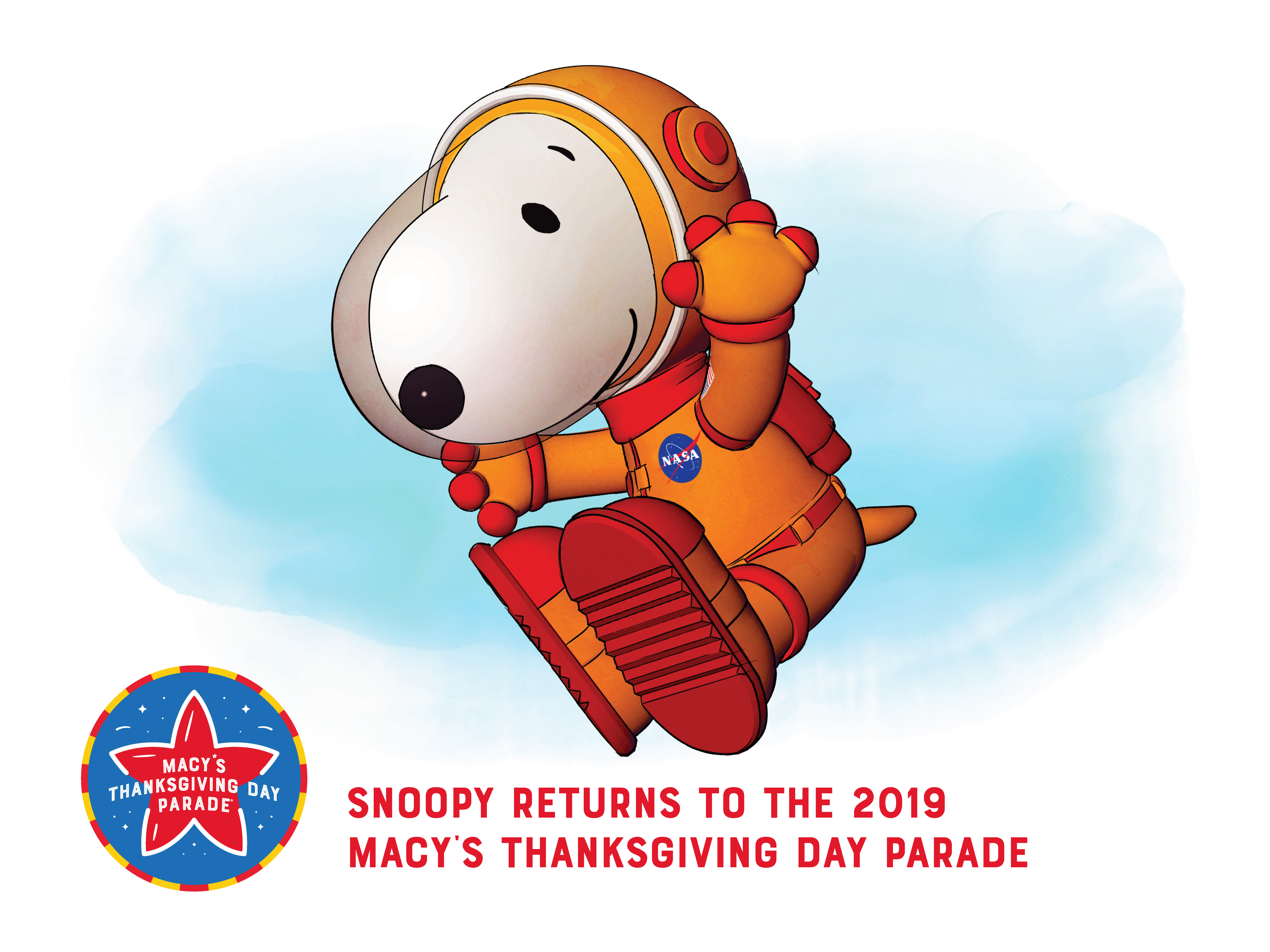 “Snoopy flying in the Macy’s Parade has become a tradition that fans from all over the world expect and have loved to enjoy for more than four decades,” said Jordan Dabby, producer of Macy’s Thanksgiving Day Parade. “This year’s flight will not only extend Snoopy’s record as the character with the most balloon designs to eight, but will add a record-extending 40th flight in the Macy’s Parade line-up. We are thrilled that he is coming back dressed in the style of a modern-day astronaut, after having first debuted as an Apollo astronaut in the 1969 Macy’s Parade.”

“When Peanuts signed a Space Act Agreement with NASA last year, we committed to working to bring the joys of space exploration and STEM into the lives of today’s kids, and to honoring the legacy of Snoopy’s history with NASA,” said Roz Nowicki, executive vice-president, Peanuts Worldwide. “Astronaut Snoopy has flown to space in the form of the Silver Snoopy award, and we are thrilled that he will once again fly down the Macy’s Thanksgiving Day Parade route, inspiring fans of all ages to look up and engage in the excitement of space.”

In addition to celebrating the 50th year of the Apollo 11 moon landing with his new guise resembling an astronaut, Snoopy will also mark the 50th anniversary of his first flight as an astronaut in the 1969 Parade. Snoopy made his debut in the 1968 Macy’s Parade and has been a crowd favorite ever since. Over the years, Snoopy has taken on a variety of roles from an Astronaut (1969-1977) to an Ice Skater (1986-1987). From 1988 to 1994, he appeared as Ice Skater Snoopy along with his pal Woodstock. From 1999 to 2001, he partied down Manhattan as Millennium Snoopy. Snoopy’s favorite guise has been as the Flying Ace (1968, 1978-1985, 2006-2011), hunting down the dreaded Red Baron. Before taking up space flight once again, Snoopy, with pal Woodstock perched on his head, took a few leisurely holiday flights down the 2.5-mile Parade route from 2013-2015.

Designed by the artists of Macy’s Parade Studio in collaboration with the PEANUTS team, the newest Astronaut Snoopy is sure to live up to the incredible high-flying legacy of his predecessors. Dressed in an orange flight suit and helmet similar to a modern astronaut, Snoopy will set out for the cosmos on Thanksgiving to delight more than 3.5 million spectators and more than 50 million television viewers nationwide. Joining the fun will be his PEANUTS pals including Charlie Brown, who will ride on the Snoopy’s Doghouse float with a few special guests.

About the Macy’s Thanksgiving Day Parade:

With more than 50 million viewers across the country and more than 3.5 million spectators that line up along the streets of New York City each year, the Macy’s Thanksgiving Day Parade is a national icon that has grown into a world-famous holiday event. For more than 90 years, the Macy’s Thanksgiving Day Parade has marked the official start of the holiday season. Growing in size and scale, the Parade proudly marches down a more than 2-mile route in New York City with more than 8,000 participants in tow including Macy’s employees, their families, celebrities, athletes, clowns and dance groups spreading holiday cheer. The Parade also features America’s best marching bands, fabulous floats and Macy’s signature giant helium character balloons. For more information on the Macy’s Parade please visit http://www.macys.com/parade or call the Parade hotline at (212) 494-4495.

Charles M. Schulz first introduced the world to the Peanuts characters in 1950, when the Peanuts comic strip debuted in seven newspapers. Since then, Charlie Brown, Snoopy and the rest of the Peanuts gang have made an indelible mark on popular culture. Peanuts animated specials and series air on major networks and streaming services, including ABC, Cartoon Network and Boomerang in the U.S., Family Channel in Canada, and the WildBrain network on YouTube worldwide. Fans also enjoy Peanuts through thousands of consumer products around the world, amusement parks attractions, cultural events, social media, and a daily comic strip available in all formats from traditional to digital. In 2018, Peanuts partnered with NASA on a multi-year Space Act Agreement designed to inspire a passion for space exploration and STEM among the next generation of students. The Peanuts characters and related intellectual property are 41% owned by DHX Media (TSX: DHX, NASDAQ: DHXM), 39% owned by Sony Music Entertainment (Japan) Inc., and 20% owned by family of Charles M. Schulz.