Featuring Fresh Entertainment Content Plus STEM-Based Educational Materials for the Next Generation, New Collaboration Builds on the Timeless NASA x Peanuts Alliance Launched in the 1960s 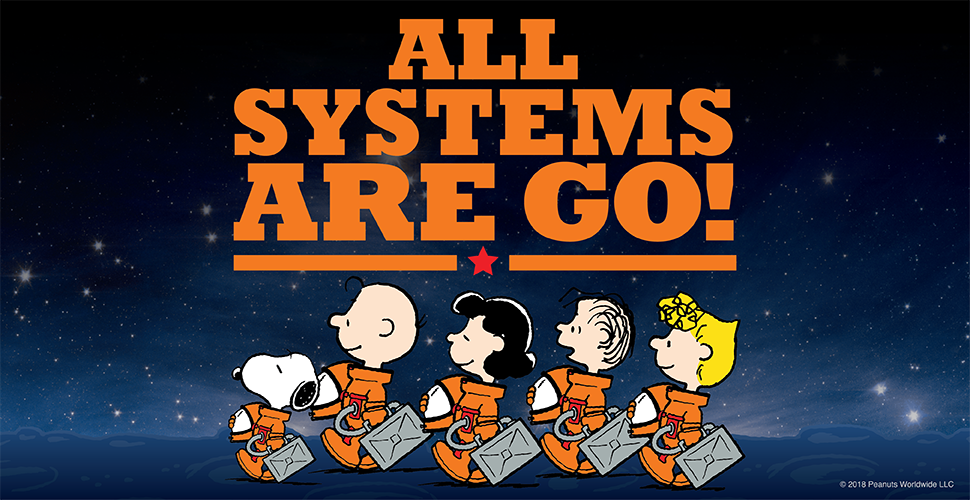 New York, NY — 10 July 2018 — NASA and Peanuts Worldwide announced today the signing of a multi-year Space Act Agreement designed to inspire a passion for space exploration and STEM among the next generation of students.

The agreement builds on a historic partnership that began during the Apollo missions of the 1960s when Peanuts creator Charles M. Schulz gave NASA permission to use Snoopy on the Agency’s spaceflight safety materials. In 1968, NASA expanded the collaboration when it introduced the Silver Snoopy award, a special honor given to NASA employees and contractors for outstanding achievements related to safety or mission success in human spaceflight.

The partnership reached new heights in 1969, when NASA sent Peanuts into space, naming the Apollo 10 command and lunar modules “Charlie Brown” and “Snoopy.”

Fifty years later, the brand-new Space Act Agreement extends the NASA and Peanuts partnership to students and fans across the country.

From all-new and original content starring Astronaut Snoopy to an in-school STEM-based curriculum about America’s latest explorations into deep space, the agreement will offer a variety of creative, interactive ways for aficionados of all ages to celebrate the 50th anniversary of Apollo 10 next year, and NASA’s historic Moon missions.

“My husband, Charles Schulz, fully embraced a collaboration with NASA for Snoopy and he was inspired to create a series of original comic strips detailing Snoopy’s fantastical journeys through space. Those strips remain among the most popular ones in circulation today,” said Jeannie Schulz, widow of Charles M. Schulz.

“My father once told me that when NASA selected his characters, Charlie Brown and Snoopy, to be the names chosen for the modules for the Apollo 10 mission on its trip to the Moon, that it was the proudest moment in his career,” adds Craig Schulz, producer of Fox’s wildly successful The Peanuts Movie in 2015 and the youngest son of Charles M. Schulz. “He was honored then, and I am honored today as we renew the historic relationship between NASA and Peanuts.”

The countdown for the 50th Anniversary of the landmark Apollo 10 lunar mission aboard the “Charlie Brown” and “Snoopy” modules begins in July at San Diego Comic-Con.

About Peanuts Worldwide
The PEANUTS characters and related intellectual property are owned by Peanuts Worldwide, a subsidiary controlled by DHX Media (TSX: DHX, NASDAQ: DHXM) and the family of Charles M. Schulz.