Toronto, 30 November 2016 – It’s time to hang your stockings and trim the tree as holiday programming arrives on Family Channel beginning December 2. Filled with holly jolly goodness, December’s programming lineup includes the season finale of Backstage, the winter finale of The Next Step and a special presentation of Lost & Found Music Studios. Viewers are also in for a festive treat with movie premieres and holiday-themed episodes of their favourite series all month long. Plus, with tons of cool programming available on The Family Channel App and Family OnDemand, it’s snow wonder Family Channel is the holiday destination of choice. 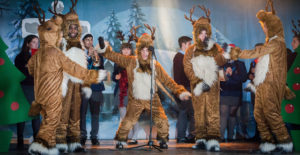 December on Family Channel is filled with happy endings and new beginnings as two fan-favourite series wrap up and one returns with a special presentation. Viewers won’t want to miss the season finale of Backstage on Friday, December 9 at 7:30 p.m. ET/PT which sees Keaton students performing at the school’s open house, or the winter finale of The Next Step on Friday, December 16 at 7 p.m. ET/PT, where Alfie and Riley go on their first date. Immediately following the A-Troupe drama, viewers can get a peek at what lies ahead for Leia and Maggie’s girl band, and Luke’s beloved van, in a brand new episode of Lost and Found Music Studios at 7:30 p.m. ET/PT. The series officially returns to Family Channel on Friday, January 13 at 4:30 p.m. ET/PT.

On Friday, December 2 at 8 p.m. ET/PT the festivities begin with the network premiere of Get Santa, followed by the classic holiday flick, Home Alone 3 at 10:15 p.m. ET/PT. The merriment continues throughout the month with seasonal programming beginning at 10 a.m. ET/PT every Saturday and Sunday and festive movies on Fridays and Saturdays at 8 p.m. ET/PT. Premiere titles include:

There’s no place like Family Channel for the holidays and from December 19 to 25, the network is decking the halls with Christmas movies from 1 p.m. to 7 p.m. ET/PT daily. Whether viewers watch their favourite holiday flicks all by their elf, or with family and friends, they won’t want to miss out on movies such as: Elf, Home Alone 2: Lost in New York, Home Alone 3 and Bob’s Broken Sleigh.

The fun continues from December 26 to January 6 with a post-Christmas mash up of daily marathons beginning at 9 a.m. ET/PT followed by movies at 12 p.m. ET/PT. Fans can wrap up the holiday season with favourite episodes from The Next Step, Backstage, Lost & Found Music Studios, Gilmore Girls and Miraculous: Tales of Ladybug and Cat Noir. Movies titles include: The Adventures of Sharkboy and Lavagirl, Legally Blonde, Men in Black and Spy Kids.

Beginning December 16, viewers can dash through the snow all the way to Family.ca to enter “Family’s Big Give Contest,” for the chance to win a cool winter vacation. There are two grand prizes: a trip for four to Big White Ski Resort in Kelowna, BC; and a round trip to Blue Mountain Resort in Collingwood, ON. Site visitors can also check out holiday-themed games and activities.

Throughout December, The Family Channel App will be decked out with holiday episodes and movies, with new episodes added regularly. For those on the go, the Download to Go feature allows users to download programming to watch later without a Wi-Fi connection – perfect for long trips in the car! Select episodes and movies from Family’s lineup will also be available on Family OnDemand beginning December 2. For a complete holiday schedule, please visit Family.ca.
Family Channel offers the best in family television entertainment in a premium, high-definition, multiplatform environment. Dedicated to celebrating family life and providing a daily vacation for Canadian families, Family airs a unique mix of top-rated Canadian and acquired series, movies and specials. Family is also home to F2N – an entertainment haven for teens that features high quality programs after 9 p.m. Family Channel subscribers have access to The Family Channel App, Family OnDemand and Family Online at no additional cost, to see hit movies and series when they want them, where they want them. Visit us at Family.ca.