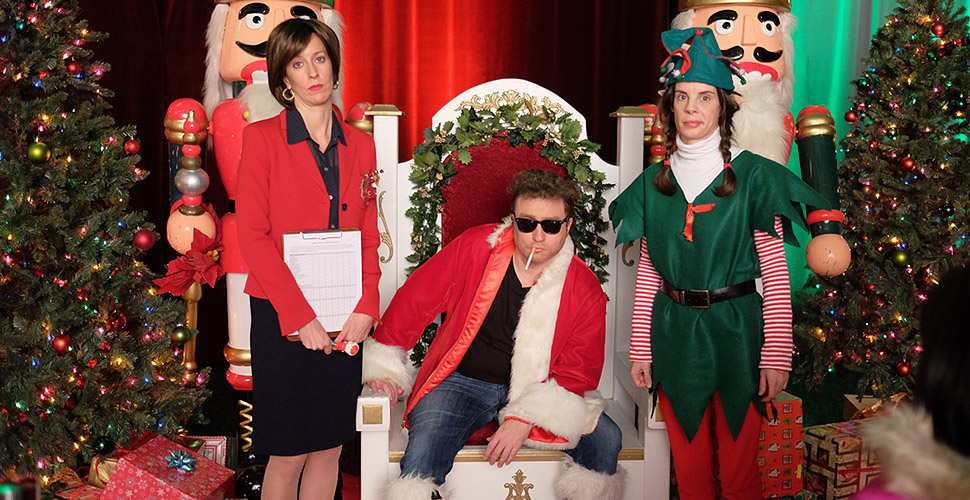 Halifax, NS – 3 December 2015 – Holiday shopping got you down? Sick of cheesy decorations and annoying Christmas carols? We’ll take your mind off that on Dec. 8 with The 22 Minutes Holiday Special.

“Up into tree pose. Don’t worry, this tree is free – unlike the one at the tree farm that cost you forty freakin’ dollars and the needles fell off on the way home … and breathe,” says the Yoga Lady in the fifth chapter of the Angry Yoga series. The original Angry Yoga is now approaching one million views on CBC’s YouTube channel, Punchline, and 13 million views on Facebook.

In Holiday Tips from The Chief, Susan Kent returns as the cynical gunslinger; while in Last-Minute Shopper, Mark Critch and Shaun Majumder are desperate shoppers whose “mortal enemy is the elderly lotto enthusiast whose sole purpose is time suckage.”

The 22 Minutes Holiday Special also features the ever-popular Mrs. Enid, Hipster Chef, and Agnes from Newfoundland, along with hilarious newbies including Method Santa, Crazy Jeff the Weatherman, and Heroes of the Holidays. In No Room at the Inn, the Nativity story gets a surprisingly fresh re-make, with Joseph, Mary and the three Wise Men comparing travel and accommodations.

The hour-long television event even reveals … the return of the Quinlan Quints, with special guest Mary Walsh. With holiday greetings from 15 mayors across Canada – from Fredericton to Toronto to Calgary and Whitehorse – the holiday special airs Dec. 8 at 8:00 p.m. / 8:30 p.m. NT on CBC Television.

This Hour Has 22 Minutes, now in its 23rd season, continues its provocative satire, targeting politics, culture and world events. It remains one of Canada’s best-known and top-rated comedy shows. It has won numerous awards, including most recently four 2015 Canadian Comedy Awards, including Best TV Show (Season 22). In addition, it was recently announced that 22 Minutes will be honoured with the Academy Icon Award, to be presented during the Canadian Screen Awards in March.

The cast will be seen next on Dec. 31, with 22 Minutes Counts Down to Midnight, a New Year’s Eve special on CBC-TV. A highlights show airs Jan. 5, 2016, with regular episodes resuming on Jan. 12.

22 Minutes has a dynamic online presence – fans can watch entire episodes online, view highlights and full sketches on Facebook, read jokes and much more on Twitter, and check out photos and videos on Instagram. The show’s social media outlets are updated continuously and are generating considerable buzz this season.

About DHX Media Ltd.
DHX Media Ltd. (www.dhxmedia.com), is a leading broadcaster, creator, producer and marketer of entertainment programming. The company markets and distributes its library of more than 11,000 episodes of programs worldwide, and licenses its owned properties through its dedicated consumer products business. DHX Media Ltd. is owner of the Family suite of channels, operated as DHX Television. With offices in 15 cities worldwide, including Toronto, Vancouver, Halifax, Los Angeles, London, Paris, Barcelona, Milan, Munich, Amsterdam and Beijing, DHX Media Ltd. is listed on the NASDAQ Global Select Market under the ticker symbol DHXM, and on the Toronto Stock Exchange under the ticker symbols DHX.A and DHX.B.