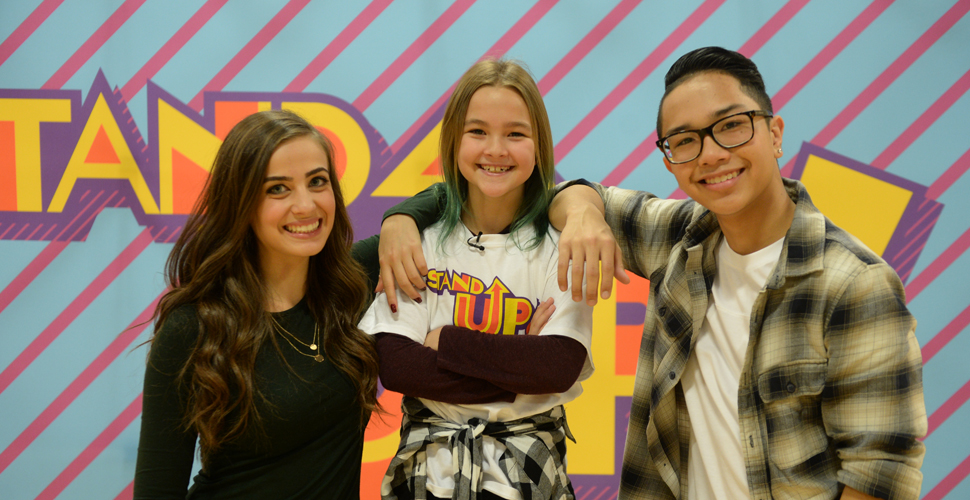 Last month, Family Channel took the message of bullying prevention on the road bringing network stars Julia Tomasone and Colin Petierre (both of Backstage) into four elementary schools across the country to host Stand UP! rallies. The schools were selected in early October after Canadian students were encouraged to enter a contest by telling Family how their school stands up to bullying. This year’s winning schools were:

At each rally, students were treated to a never-before-seen episode of The Next Step created specifically for Bullying Awareness Week, followed by a discussion led by a representative of the national research organization PREVNet (Promoting Relationships and Eliminating Violence Network), Family’s longtime partner. A TELUS WISE ambassador was on hand in both Dartmouth and Fort McMurray to discuss cyberbullying and internet safety, while Jason Colero from the Toronto Argonaut’s Huddle Up program shared his own personal experiences at the rally in Aurora. Closing out each rally in Family Channel style, hosts Julia and Colin kicked off a school-wide dance party set to this year’s Stand UP! anthem “We Stand Up” sung by cast members from Backstage. Footage from the 2016 Stand UP! Rally Tour will be featured in short documentaries that will air on Family Channel and Family.ca as part of Bullying Awareness Week.

From Monday, November 14 – Friday, November 18, viewers can tune-in daily at 4 p.m. ET/PT for bullying-themed episodes of their favourite shows including Cheerleaders, Make Me Over, The Fresh Prince of Bel-Air, Turbo FAST and more. The dedicated lineup features a brand new episode of The Next Step on Thursday, November 17 at 4:30 p.m. ET/PT which demonstrates how people can misuse power to bully others, as well as how power can be used to stand up to bullying. Created by Family Channel and PREVNet for the Stand UP! campaign, the stand-alone episode is accompanied by a Teacher’s Guide, available for downloaded at Family.ca. Also premiering on Friday, November 18 at 4 p.m. ET/PT is a two-part special from Backstage which deals with bullying behaviour.

In addition to the afterschool lineup, PSAs and interstitial content featuring Family stars opening up about their own bullying experiences will air all throughout the week. Interviews include: cast members from The Next Step, Backstage and We Are Savvy, Big Ticket Summer Concert performers Daya and Shane Harte, Family’s very own Deepa Prashad and more! Informative shorts created in association with TELUS WISE from the hit series Backstage and Degrassi: Next Class are currently airing, exploring issues such as cyberbullying, protecting your privacy online and internet safety.

Those interested in learning more about Family Channel’s 14th annual Bullying Awareness Week campaign can visit Family.ca/StandUp. The website offers downloadable resources including tip sheets and activities for parents, teachers and students. Plus, kids can listen to the official 2016 Stand UP! anthem, “We Stand Up!” featuring artists from Backstage, Aviva, Josh Bogert, Mckenzie Small and Kyal Legend. All of the episodes premiering as part of Family’s Bullying Awareness Week lineup will also be offered on Family.ca as well as Family OnDemand and the Family Channel App as they become available.

Family Channel offers the best in family television entertainment in a premium, high-definition, multiplatform environment. Dedicated to celebrating family life and providing a daily vacation for Canadian families, Family airs a unique mix of top-rated Canadian and acquired series, movies and specials. Family is also home to F2N – an entertainment haven for teens that features high quality programs after 9 p.m. Family Channel subscribers have access to the Family Channel App, Family OnDemand and Family Online at no additional cost, to see hit movies and series when they want them, where they want them. Visit us at Family.ca.