Toronto, 20 June 2016 – DHX Television’s Family Channel and Radical Sheep Productions, a division of Boat Rocker Studios, announced today that principal photography has begun on the fifth season of the award-winning global tween series, The Next Step. The fan-favourite series, which follows the lives of an elite group of dancers that train at the Next Step studio, has become a worldwide phenomenon, sparking three Canadian tours, international tours through Europe, the UK and Australia, a feature film, and spin-off series. Production on the 20-episode order begins this summer in Toronto, with the fifth season slated to premiere on Family Channel in 2017. 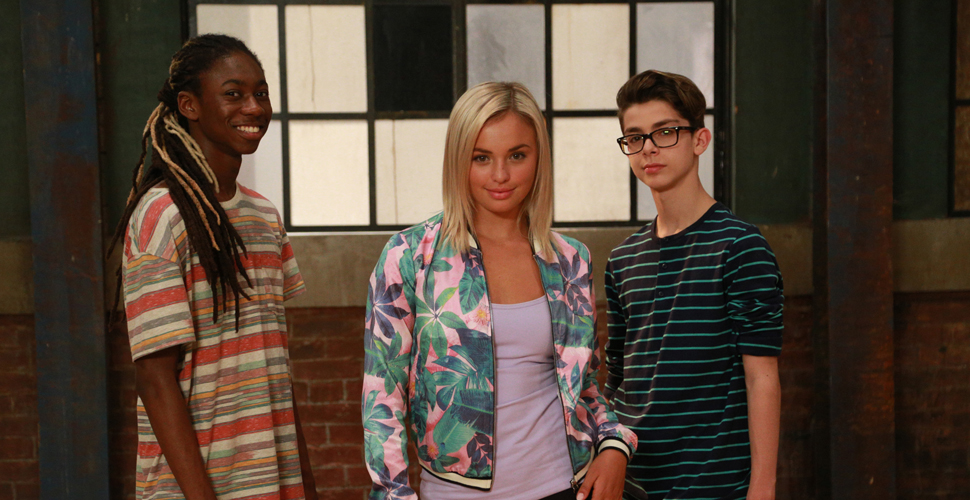 Isaiah Peck, Victoria Baldesarra and Julian Lombardi during production of The Next Step.

“We’re elated that after four seasons this Canadian original series continues to draw in viewers globally with its serialized storylines, relatable characters, and of course, tremendous dancing,” said Michael Goldsmith, Vice President, Original Production, DHX Television. “This is the first time in network history that we’ve commissioned a fifth season of an original production and I think it speaks volumes to the affinity of the brand and the connection that our young stars have made with fans worldwide. We’re so proud of this show and look forward to working with Radical Sheep to deliver more episodes, dance and drama internationally from this homegrown hit.”

“We are thrilled to be back for another season of The Next Step. The talent and dedication of our amazing cast, writers, producers and crew on this series never ceases to amaze us. The continued success of The Next Step around the world is a testament to their brilliance and hard work,” said Executive Producers of the show and Co-Presidents of Boat Rocker Studios, Ivan Schneeberg and David Fortier.

Season five opens a new chapter for The Next Step dance studio. The studio is expanding and attracting a lot of fresh faces and the dancers are looking to step up their game. The dance world is a tight family, but competition will put old friendships and new relationships to the test, as the dancers try to strike a balance between individual talent and dedicated teamwork. This season asks the question: How far would you go to make it to the top?

In addition to returning fan-favourites from previous seasons of the show, season five of The Next Step will introduce fans to a new group of talented young dancers including: Dylan Ratzlaff as Jacquie; Jessica Lord as Lola; Milaina Robinson as Zara; Julian Lombardi as Ozzy; Hanna Miller as Heather; Noah Zulfikar as Kingston; Dawson Handy as Josh; and Julian Elia as Elliot.

Currently airing Fridays at 7:30 p.m. ET/PT on Family, season four has brought about a lot of change to the A-Troupe under Riley’s (Brittany Raymond) leadership. This Friday, June 24 marks the midseason finale, titled “Heat of the Moment,” where auditions for the qualifier duet begin and Alfie (Giuseppe Bausilio) makes an important decision about Riley. Fans looking to catch up on The Next Step can catch the series in its entirety on The Family Channel App.

The Next Step is produced by Radical Sheep Productions, a division of Boat Rocker Studios in association with Family Channel and is executive produced by Ivan Schneeberg and David Fortier (Lost & Found Music Studios, Wingin’ It); Michelle Melanson Cuperus (The Bagel and Becky Show, Fangbone!); Rachael Schaefer (The Next Step, Wingin’ It); Karen McClellan (The Other Kingdom, Being Erica); and Frank van Keeken (Lost & Found Music Studios, Wingin’ It). The Next Step was created by Frank van Keeken. The Next Step is also produced with the participation of the Shaw Rocket Fund, the Canada Media Fund (CMF) and CBBC. BBC Worldwide handles the international rights to the series.

Radical Sheep Productions Inc., a division of Boat Rocker Studios has over 500 episodes of award winning series and successful licensing programs to its name including Fangbone!,Yup Yups, Stella and Sam, and Can You Imagine That! Radical Sheep is currently in production on The Bagel and Becky Show for Teletoon and BBC Worldwide, The Next Step for DHX and Ollie! The Boy who Became What He Ate for the CBC.

Family Channel offers the best in family television entertainment in a premium, commercial-free environment. Dedicated to celebrating family life and providing a daily vacation for children and their families, Family airs a unique mix of top-rated Canadian and acquired series, movies and specials. Family is also home to F2N – an entertainment haven for teens that features high quality programs after 9 p.m. Family Channel subscribers have access to the Family Channel App, Family OnDemand and Family Online at no additional cost, to see hit movies and series when they want them, where they want them. Visit us at Family.ca.