Toronto, 7 November 2017 – Family Channel is celebrating its 15th annual Bullying Awareness Week with a programming event and social media campaign designed to encourage kids to stand up, not stand by, when they see bullying happen. From Monday, November 20 to Friday, November 24, viewers can tune-in for an entire week of bullying-themed episodes, movies and short-form content featuring their favourite stars, and post to social media using #StandUP. Exclusive footage from the network’s previously announced 2017 Stand UP! Rally Tour will also air, starring The Next Step’s Myles Erlick (Noah) and Alexandra Chaves (Piper). 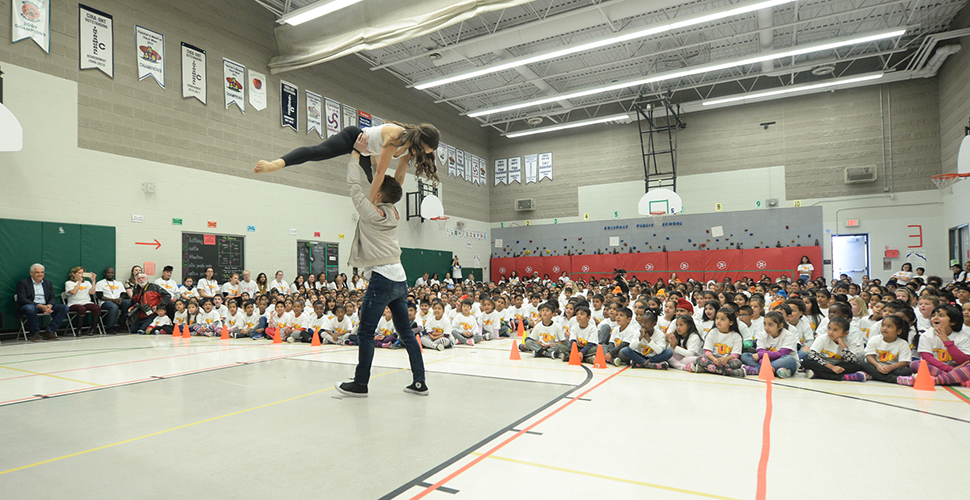 The Next Step‘s Alexandra Chaves and Myles Erlick perform at the Stand UP! Rally in Brampton, ON. Visit Family Channel’s Stand UP! site: www.family.ca/standup

Earlier this month, Family Channel travelled across the country, taking the message of bullying prevention into three Canadian elementary schools. The winning schools were chosen in October, after students entered an online contest telling the network how their school stands up to bullying. This year’s winning schools are:

At each rally, students were treated to a screening of bullying-themed content from the series Backstage, an interactive Q&A led by a representative from the research organization PREVNet, and an original dance performance by Alexandra Chaves and Myles Erlick, who also led students in a school-wide dance party. Footage from the 2017 Stand UP! Rally Tour, including the world premiere of Alexandra’s and Myles’ original dance video; a behind-the-scenes look at the making of the original dance; and a compilation of rally footage from all three schools, will be featured on Family Channel, Family.ca and on the Family Channel App as part of Bullying Awareness Week.

From Monday, November 20 to Friday, November 24, viewers can tune in for bullying-themed movies and episodes from their favourite series including The Next Step, Miraculous: Tales of Ladybug and Cat Noir, Alvinnn!!! and The Chipmunks, Backstage, Turbo FAST and more. Also airing are informative shorts that were created with TELUS WISE, starring cast members from The Next Step. The shorts provide tips and discuss relevant topics such as how to stand up to cyberbullying, what to do if someone posts something mean about you online, and how to respond if someone sends you an inappropriate text.

Throughout the week, Family Channel will be taking to Facebook, Twitter and Instagram to keep the conversation about bullying prevention going. Viewers are encouraged to show their support by posting to social media with #StandUP, tagging @Family_Channel and tagging a friend who’s always got their back.

Those interested in learning more about this year’s Bullying Awareness Week campaign can visit Family.ca/StandUp. The dedicated webpage offers downloadable resources for students, parents and teachers, including three brand new Teacher’s Guides, prepared by PREVNet. Activities and tip sheets are available in both English and French.

All of the episodes airing as part of Family’s Bullying Awareness Week lineup will be also be offered on Family.ca, the Family Channel App and Family OnDemand. Short form content, including the Digital Safety Tips created with TELUS WISE and The Next Step, can be found on Family Channel’s YouTube page.

Family Channel co-founded Bullying Awareness Week in 2003 and developed the Stand UP! campaign in association with PREVNet (Promoting Relationships and Eliminating Violence Network), a national network of national child- and youth-serving organizations and corporations committed to ending bullying and promoting positive relationships.