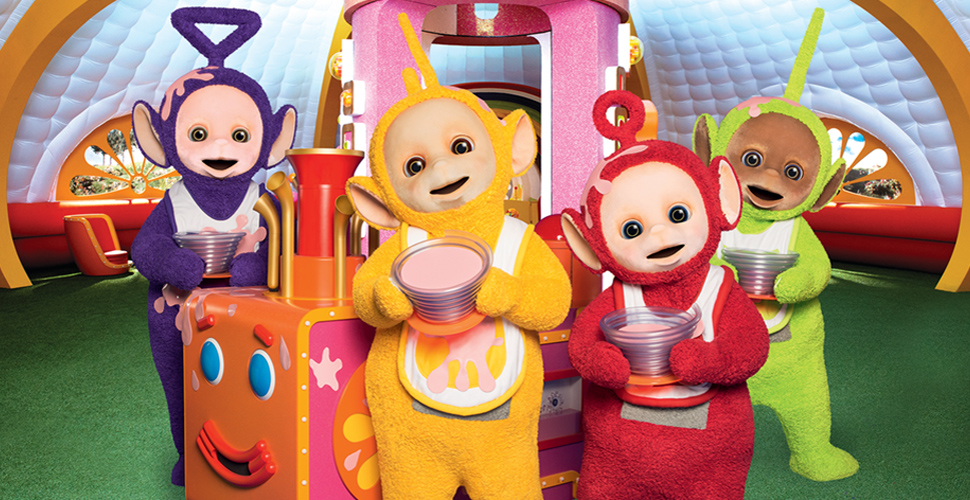 Halifax, NS – 7 December 2015 – DHX Media (“DHX” or the “Company”) (NASDAQ: DHXM; TSX: DHX.A, DHX.B), a key player internationally in the production, distribution, broadcast and licensing of entertainment content for children and families, has garnered top ratings for the UK airing of its brand new Teletubbies series.

After the first week on air, the series has won a 66% share of the homemakers with children aged 0-3 audience and increased CBeebies’ audience share amongst the same category by 27%.

Based on average figures for the first five episodes, using data from industry ratings body BARB, the launch of the brand new episodes also saw Teletubbies win a 33% share of the children aged 4-6 audience. Teletubbies occupied four of the places in the Top 10 most watched children’s programmes of the week, including the number 1 slot.

Launched in the UK on Monday 9th November and featuring the voices of British acting talent including Jim Broadbent, Jane Horrocks, Daniel Rigby, Fearne Cotton and Antonia Thomas, the new series features the same well-loved characters and styling as the original but has been visually enhanced, bringing a refreshed and contemporary look and feel to one of the world’s best-loved pre-school properties. The new series also features a number of brand new elements including Touch Screen tummy TVs and a hi-tech Tubby Phone, which bring the Teletubbies and their home up to date for 21st century viewers.

“It has been a massive undertaking bringing such an iconic and much-loved children’s series back for a new generation so we are greatly encouraged by these early viewing figures,” says Steven DeNure, President and COO at DHX Media. “The subtle changes we’ve made to Teletubbies are clearly resonating with viewers and we hope its popularity continues to soar.”

Global phenomenon Teletubbies first launched in March 1997 and became one of the most successful global children’s brands of all time. It has reached over 1 billion children to date and the original episodes have aired in over 120 territories in 45 different languages. It was the very first western pre-school property to air on China’s CCTV reaching an audience of 300 million children. Its enduring resonance with children is further underscored by the brands postings on YouTube which garner almost 75 million views per month.

About Teletubbies
Originally created in 1997 Teletubbies is a children’s television series targeted at preschool viewers. In September 2013, DHX Media acquired all rights to Teletubbies through its purchase of Ragdoll Worldwide, a joint venture between Ragdoll Productions and BBC Worldwide that owned, managed and exploited Ragdoll programming. Multi award-winning, Teletubbies is designed to encourage young children to watch television creatively. Full of fun and exploration it inspires confidence and curiosity and nurtures childhood development. DHX Media has engaged award-winning UK production company Darrall Macqueen to produce Teletubbies. Together they are pioneering a 21st century version of the show for a new generation of viewers.

About DHX Media
DHX Media Ltd. (www.dhxmedia.com) is a key player internationally in the production, distribution, broadcast and licensing of entertainment content for children and families. Owner of the world’s largest independent library of kids’ and family content, at more than 11,000 half-hours, DHX Media is recognized globally for such brands as Teletubbies, Yo Gabba Gabba!, Caillou, In the Night Garden, Inspector Gadget, Make It Pop, Slugterra and the multiple award-winning Degrassi franchise. DHX Media is comprised of four main business units: DHX Studios creates high-quality original entertainment at its Vancouver and Halifax animation studios, its Toronto live-action studio, and in working with top international producers; DHX Distribution is a major provider of content to the global market; DHX Television, home to the Family suite of channels, is dedicated to delivering best-in-class programming to Canadian families; and DHX Brands specializes in creating, building and managing high-profile global entertainment brands within the children’s and young-adult markets. DHX Media also owns the full-service international licensing agency, Copyright Promotions Licensing Group Ltd. (CPLG), which represents numerous entertainment, sport and design brands. DHX Media has offices in 15 cities worldwide, including Toronto, Vancouver, Halifax, Los Angeles, London, Paris, Barcelona, Milan, Munich, Amsterdam and Beijing. The Company is listed on the NASDAQ Global Select Market under the ticker symbol DHXM, and on the Toronto Stock Exchange under the ticker symbols DHX.A and DHX.B.