Halifax, NS – 12 April 2017 – DHX Media (or the “Company”) (TSX: DHX.A, DHX.B, NASDAQ: DHXM), the world’s leading independent, pure-play children’s content company, is pleased to announce that its full-service international licensing agency, CPLG, has been appointed by Spin Master Ltd. (TSX: TOY), a leading global children’s entertainment company, and a top ranked global toy manufacturer, according to the NPD Group*, to represent Hatchimals across the UK, France, Germany, Benelux, Italy, Iberia, Central and Eastern Europe and the Nordics. CPLG will be building on the existing success of the Hatchimals brand with plans to hatch new and creative licensed products across all markets. 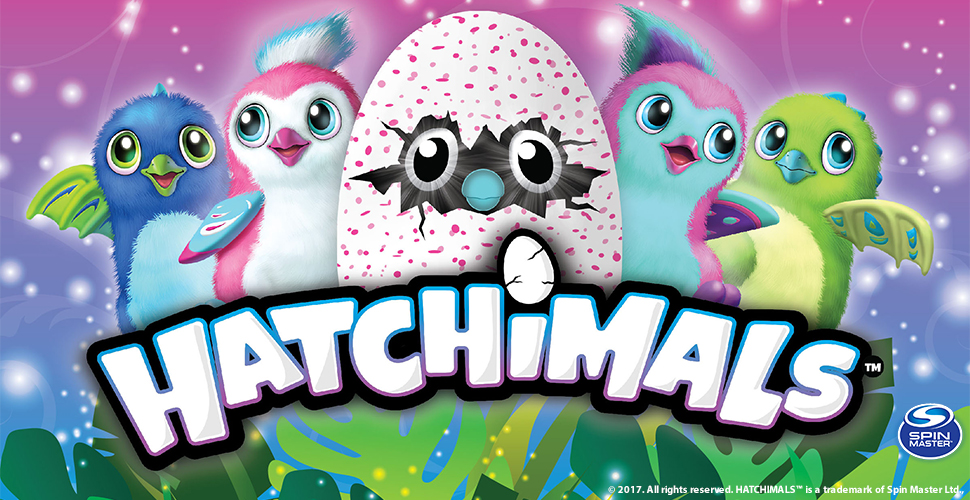 Spin Master revealed a world of wonder and discovery with the launch of Hatchimals on October 7, 2016. CPLG will be focused on expanding this magical toy phenomenon into new product categories including apparel, home, stationery, food and health and beauty. Working closely with Spin Master, CPLG aims to bring consumers deeper into the universe of Hatchimals and some of its species, including Pengualas and Draggles.

“We are thrilled to be working with Spin Master to represent Hatchimals, a truly magical toy,” said Peter Byrne, CEO, CPLG. “We look forward to launching new creative product ranges across all target categories, opening new retail distribution for the brand and increasing retail presence for all species and characters living in Hatchtopia.”

“We have seen a tremendous response to Hatchimals, and are thrilled to be working with CPLG to help bring the magic of Hatchimals to life across new product categories in Europe,” said Ben Gadbois, President and COO, Spin Master Ltd. “This agreement, in addition to our other plans for Hatchimals in 2017, will build the brand and fuel children’s imaginations for years to come.”

Nestled inside a brightly speckled egg, the Hatchimal relies on a child’s curiosity, care and nurturing. The Hatchimal responds to the power of human touch and begins to hatch and communicate through taps, pecks, lights and sounds—which Hatchimal is inside is only revealed when it hatches. Following the launch, Hatchimals became a global hit, and was marked a top toy by many retailers, as well as receiving the prestigious Innovative Toy of the Year award from the Toy Industry Association of America and the Toy of the Year award at the UK Toy Industry Awards.

About Spin Master Corp.
Spin Master (TSX:TOY; www.spinmaster.com) is a leading global children’s entertainment company that creates, designs, manufactures, licenses and markets a diversified portfolio of innovative toys, games, products and entertainment properties. Spin Master is best known for award-winning brands including Zoomer™, Bakugan™, Meccano™, and 2017 Toys of the Year, Hatchimals™, Air Hogs™ and PAW Patrol™. Since 2005, Spin Master has received 82 TIA Toy of The Year (TOTY) nominations with 21 wins across a variety of product categories, including 13 TOTY nominations for Innovative Toy of the Year, more than any of its competitors. To date, Spin Master has produced six television series, including 2007 success Bakugan Battle Brawlers and current hit PAW Patrol, which is broadcast in over 160 countries and territories globally. Spin Master employs over 1,000 people globally with offices in Canada, United States, Mexico, France, Italy, United Kingdom, Slovakia, Poland, Germany, Sweden, the Netherlands, China, Hong Kong, Japan, and Australia.

About CPLG
CPLG (www.cplg.com) is one of the world’s leading entertainment, sport and brand licensing agencies with offices in the UK, Benelux, France, Germany, Italy, Spain, Sweden, Poland, Middle East, Greece & Turkey and the US. Owned by DHX Media (www.dhxmedia.com) a leader in the creation, production and licensing of family entertainment rights, CPLG has more than 40 years of experience in the licensing industry. It provides each of its clients with dedicated licensing and marketing industry professionals and a fully-integrated product development, legal and accounting service. CPLG believe that partnership is about clarity, openness and trust, and is widely known for its no-nonsense, straightforward approach; Expert Common Sense.

Disclaimer
This press release contains “forward-looking statements” under applicable securities laws with respect to DHX Media including, without limitation, the business plans and strategies for and growth of the Hatchimals brand and associated products. Although the Company believes that the expectations reflected in such forward-looking statements are reasonable, such statements involve risks and uncertainties and are based on information currently available to the Company. Actual results or events may differ materially from those expressed or implied by such forward-looking statements. Factors that could cause actual results or events to differ materially from current expectations, among other things, include  delivery and scheduling risk associated with production, the Company’s ability to execute and close licensing transactions, and risk factors discussed in materials filed with applicable securities regulatory authorities from time to time including matters discussed under “Risk Factors” in the Company’s most recent Annual Information Form and annual Management Discussion and Analysis, which also form part of the Company’s annual report on Form 40-F filed with the SEC. These forward-looking statements are made as of the date hereof, and the Company assumes no obligation to update or revise them to reflect new events or circumstances, except as required by law.