“Revenue in Fiscal 2018 increased by 45% to $434.4 million, primarily driven by Peanuts and continued strong growth in WildBrain,” said Michael Donovan, Executive Chair and CEO, DHX Media. “During the course of the last year, we made great progress in realizing operational efficiencies and refocusing our production business. As the Company exits the Strategic Review and internal review, also announced today, we have realigned our strategy to capitalize on key macro trends in the industry. These trends include, the rising demand from the global streaming market for premium original programming, and the increasing popularity of kids’ content on YouTube, which is driving rapid growth in our WildBrain platform. We believe this significant refocusing of our strategy and efforts will allow us to deliver growth, while generating free cash flow to pay down debt.”

Doug Lamb, CFO, DHX Media, added: “Reducing leverage is one of our key priorities. The Sony transaction was a significant step in that direction and ensures we have the financial flexibility to maintain investment in growth. Our operations are providing improving free cash flow. In combination with cash savings from the quarterly dividend suspension, that provides additional funds for debt repayment.”

Fiscal 2018 revenue increased 45% to $434.4 million, while Q4 2018 revenue grew 11% to $97.4 million over the prior-year periods.  This growth was primarily driven by the acquisition of Peanuts and Strawberry Shortcake, and by continued strong growth in WildBrain, which is becoming a major distribution platform for monetizing of our vast library. Excluding acquisitions, revenue for Fiscal 2018 of $288.9 million was down by approximately 3%, compared to Fiscal 2017, with Q4 2018 revenue at $63.8 million, versus $87.6 million for the prior-year quarter.  The declines in organic revenue were primarily due to a decline in distribution (excluding WildBrain) revenue in Q4 2018.

Gross margin was 44% for Fiscal 2018 and 43% for Q4 2018.  This compared with 52% in Fiscal 2017 and 46% in Q4 2017. Lower margins in the fiscal year were due to the new mix of the Company’s business with Peanuts, as well as continued growth in third-party revenues from WildBrain, and a larger proportion of third-party service work in our studios.

We are beginning to see the benefits of our initiatives to drive improving cash generation.  This has resulted in positive cash flow from operating activities of $13.4 million for Fiscal 2018 compared to a cash outflow of $6.5 million from the prior year.  Both Q4 2018 and Q4 2017 generated positive operating cash flow of $8.3 million and $6.9 million, respectively. Excluding approximately $24.4 million in fees and refinancing payments related to the Peanuts and Strawberry Shortcake acquisition, operating cash flow for the year ended June 30, 2018 would have been approximately $37.8 million.

Subsequent to year-end, the Company closed the sale of a minority stake in Peanuts to Sony Music Entertainment (Japan) Inc., of which the net proceeds of US$161.3 million ($210.0 million)3 were used to repay a portion of the Company’s term loan.

WildBrain Continued to Emerge as a Highly Strategic Platform

As previously announced, throughout Fiscal 2018, we implemented cost rationalization initiatives and acquisition synergies, from which we expect to realize approximately $11.0 million in annualized cost savings going forward:

The Company has outlined a disciplined strategy aimed at delivering strong organic growth, increasing cash flow and de-levering the balance sheet. We expect Fiscal 2019 to begin to show the benefits of the changes we have made and to better demonstrate the value of our strong and unique portfolio of assets, as we focus on the following key priorities: 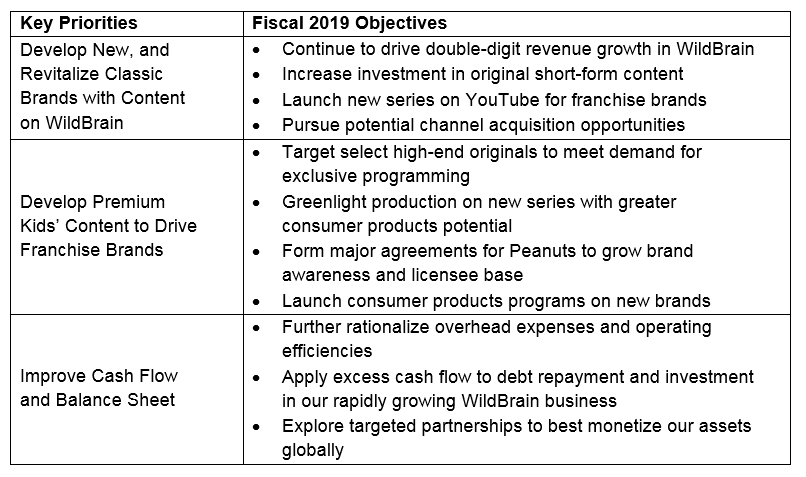 To listen by phone, please call (888) 231-8191 toll-free, or (647) 427-7450 internationally and reference conference ID 8980389. Please allow 10 minutes to be connected to the conference call. The presentation for the call will also be posted to the Investor Relations section of our website, at: http://www.dhxmedia.com/investors/.

Disclaimer
This press release contains “forward-looking statements” under applicable securities laws with respect to DHX Media including, without limitation, statements regarding expected growth of WildBrain, expected use of available cash, cost rationalization initiatives and expected results therefrom, the markets and industries in which the Company operates, the business strategies, key priorities and objectives, and operational activities of the Company and results therefrom, and the future financial and operating performance of the Company. Although the Company believes that the expectations reflected in such forward-looking statements are reasonable, such statements involve risks and uncertainties and are based on information currently available to the Company. Actual results or events may differ materially from those expressed or implied by such forward-looking statements. Factors that could cause actual results or events to differ materially from current expectations, among other things, include the ability of the Company to execute on its business strategies, the ability of the Company to realize expected operating savings, consumer preferences, market factors, and risk factors discussed in materials filed with applicable securities regulatory authorities from time to time including matters discussed under “Risk Factors” in the Company’s most recent Annual Information Form and annual Management Discussion and Analysis, which also form part of the Company’s annual report on Form 40-F filed with the U.S. Securities and Exchange Commission. These forward-looking statements are made as of the date hereof, and the Company assumes no obligation to update or revise them to reflect new events or circumstances, except as required by law.