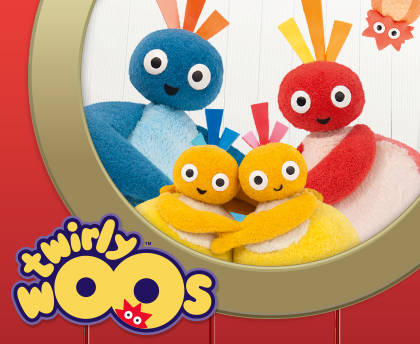 Twirlywoos is devised and executive produced by Anne Wood with lead creative and writer, Steve Roberts and producer, Chris Wood. Executive producer for CBeebies is Michael Towner. The series is produced in association with DHX Media, which also handles global distribution, merchandising, brand management and marketing.

Steven DeNure, President and COO of DHX Media, said: “The response of preschool children and their parents to this series has been fantastic – Anne Wood and her team at Ragdoll have created another standout show that puts children’s development front and center and is hugely funny and charming to boot. We are very happy to be part of this superb, returning brand.”

Continuing the innovative, nurturing, inspiring, children-led entertainment for which Ragdoll Productions is renowned, Twirlywoos features laugh-out-loud child-centric humour which encourages preschoolers to think for themselves, and gain confidence in their own perceptions of the world. Through the show, young audiences are able to reinforce their understanding as they grow and develop, becoming active and inquisitive within their own lives.

The Twirlywoos are four small, bird-like characters who are inquisitive, enthusiastic and always looking to learn something new about the world.

About DHX Media
DHX Media Ltd. (www.dhxmedia.com) is a key player internationally in the production, distribution, broadcast and licensing of entertainment content for children and families. Owner of the world’s largest independent library of kids’ and family content, at more than 11,500 half-hours, DHX Media is recognized globally for such brands as Teletubbies, Yo Gabba Gabba!, Caillou, In the Night Garden, Inspector Gadget, Make It Pop, Slugterra and the multiple award-winning Degrassi franchise. DHX Media is comprised of four main business units: DHX Studios creates high-quality original entertainment at its Vancouver and Halifax animation studios, its Toronto live-action studio, and in working with top international producers; DHX Distribution is a major provider of content to the global market; DHX Television, home to the Family suite of channels, is dedicated to delivering best-in-class programming to Canadian families; and DHX Brands specializes in creating, building and managing high-profile global entertainment brands within the children’s and young-adult markets. DHX Media also owns the full-service international licensing agency, Copyright Promotions Licensing Group Ltd. (CPLG), which represents numerous entertainment, sport and design brands. DHX Media has offices in 15 cities worldwide, including Toronto, Vancouver, Halifax, Los Angeles, London, Paris, Barcelona, Milan, Munich, Amsterdam and Beijing. The Company is listed on the NASDAQ Global Select Market under the ticker symbol DHXM, and on the Toronto Stock Exchange under the ticker symbols DHX.A and DHX.B.

About CBeebies
CBeebies is dedicated to delighting and surprising its pre-school audience and it remains the UK’s most watched and most loved channel for the under-sixes. Just under half of the target audience tune in every week (parents and carers with children aged 0-3 and four- to six-year-olds in digital homes) and our reach is over double that of our nearest competitor.

Our most popular shows include In the Night Garden, Something Special, Octonauts, Justin’s House, Mr Bloom’s Nursery and Tree Fu Tom together with new shows Swashbuckle and Old Jack’s Boat.

Building on our programmes by creating entertaining, educational and interactive digital content such as apps and games is something we’re very passionate about. The CBeebies website is hugely popular with our young audience and their parents and helps extend the ‘learning through play’ philosophy with an average of 1.2 million unique browsers. Last summer, we launched our first app – CBeebies Playtime – which has seen almost 3m downloads. Following the success of Playtime, we recently launched our CBeebies Storytime app, which is all about making reading fun, and it is designed to help improve reading and listening skills whilst encouraging ‘family learning’.

CBeebies is Bafta’s Children’s Channel of the Year.

About Ragdoll Productions
Ragdoll Productions, a privately owned family company, was founded by Anne Wood in 1984 and has produced more than 1,500 internationally acclaimed children’s television programmes aimed at the youngest viewers, including the phenomenally successful, BAFTA-winning Teletubbies, broadcast in more than 120 countries and territories around the world; the double-BAFTA-winning In the Night Garden; BAFTA-winning Dipdap; and The Adventures of Abney & Teal, Rosie & Jim, Brum and internationally award-winning Open A Door.

In September 2013, Ragdoll Worldwide, a joint venture with BBC Worldwide, was acquired by DHX Media, a leading Canadian broadcaster, distributor and producer, and they now own the rights to the early Ragdoll catalogue includingTeletubbies and In the Night Garden.

Disclaimer
This press release contains forward looking statements with respect to DHX Media including the production of the series. Although the Company believes that the expectations reflected in such forward looking statements are reasonable, such statements involve risks and uncertainties and are based on information currently available to the Company. Actual results may differ materially from those expressed or implied by such forward-looking statements. Factors that could cause actual results or events to differ materially from current expectations, among other things, include risk factors discussed in materials filed with applicable securities regulatory authorities from time to time including matters discussed under “Risk Factors” in the Company’s most recent Annual Information Form and annual Management Discussion and Analysis, which form part of the Company’s registration statement on Form 40-F filed with the United States Securities and Exchange Commission. These forward-looking statements are made as of the date hereof, and the Company assumes no obligation to update or revise them to reflect new events or circumstances, except as required by law.