Following successful premiere on Nicktoons in the U.S., DHX Media original picked up by Nickelodeon International for more than 140 territories

Halifax, NS – 17 January 2018 – DHX Media (or the “Company”) (TSX: DHX.A, DHX.B; NASDAQ: DHXM), a leading global children’s content and brands company, and Nickelodeon are spreading mayhem worldwide with a new international broadcast agreement for season one of the original DHX Media series, Massive Monster Mayhem. Following the show’s successful premiere on Nicktoons in the U.S., Nickelodeon International has picked it up for air across more than 140 territories. Produced by DHX Media, Massive Monster Mayhem is co-created by Artur Spigel (founder of 7ate9 Entertainment) and Michael Chaves. 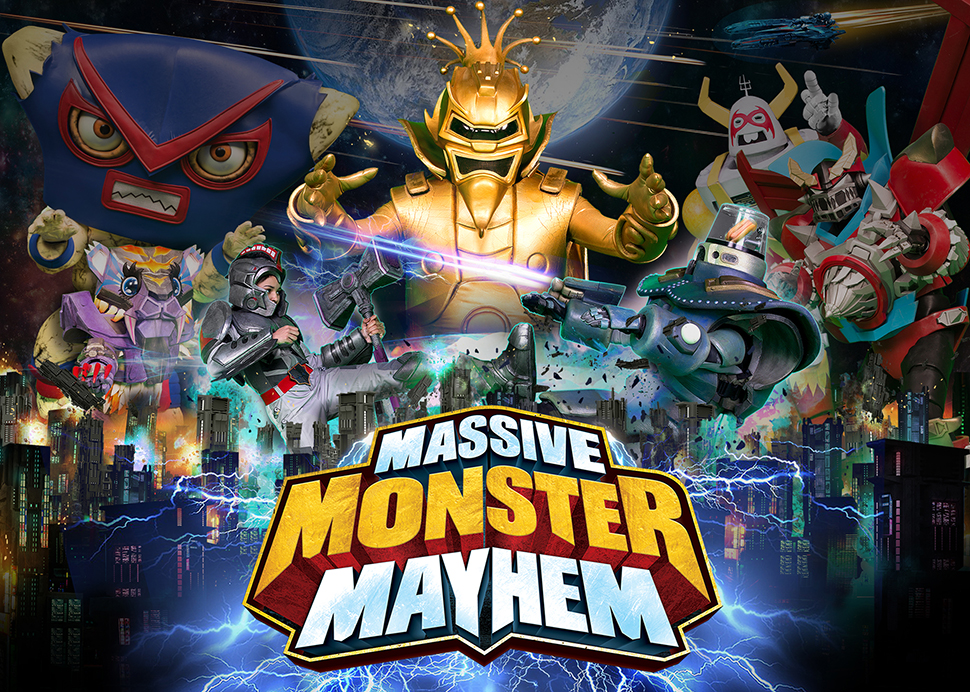 Massive Monster Mayhem is an original show for kids 6–11 that combines live action and CGI animation with real competition and comedy. Each episode features three real-life kid heroes competing in a gauntlet of Intergalactic Battle Alliance challenges to become Earth’s champion and face off against Master Mayhem’s league of monsters in the ultimate “Monster Mashdown.” The unique series combines cutting-edge, real-time CGI and pre-visualization technology.

“With its high-tech hilarity and competitive craziness, Massive Monster Mayhem is an audacious and action-packed show that kids just love,” said Josh Scherba, EVP, Distribution and Content. “Following a strong start with solid ratings in the U.S. on Nicktoons, we’re delighted to extend the series to Nickelodeon’s international audience. We see exciting potential with this brand to reach beyond TV into games, toys and other consumer products, and we look forward to spreading more Massive Monster Mayhem to kids worldwide.”

Massive Monster Mayhem originally launched on Nicktoons in the U.S. in October 2017, garnering solid ratings among the network’s audience. As part of the new agreement, the mayhem will begin rolling out on Nickelodeon’s international channels beginning in 2018, with season one scheduled to premiere on the broadcaster’s Nordics, Australian and MENA channels in January. The series will roll out across remaining territories throughout the year.

Global distribution for Massive Monster Mayhem is handled by DHX Media, while licensing is managed by the company’s brand management and consumer products arm, DHX Brands.  With its stunning visuals, which combine cutting-edge, real-time CGI and pre-visualization technology, and its host of exciting characters – like Master Mayhem, the self-proclaimed “Greatest Ruler in the Universe” – Massive Monster Mayhem offers significant appeal for young audiences and great potential for consumer products.

Produced by DHX Media, Massive Monster Mayhem is a brand-new concept in kids’ entertainment. Massive Monster Mayhem features live gameplay by kids in futuristic challenges against gigantic Monster Superstars for the chance to win prizes and save the planet from destruction. The series is executive produced by 7ate9’s Art Spigel, together with DHX Media’s Steven DeNure, Anne Loi, Ken Faier and Josh Scherba. The Massive Monster Mayhem Match App invaded the iTunes App Store and Google Play Store on October 2017 and was developed by Epic Story Interactive.

About 7ate9 Entertainment
7ate9 Entertainment is a leading kids’ IP incubator and all-platform production company that creates breakthrough content for a new, global audience.  With over 20 years on the forefront of kids’ entertainment, 7ate9 combines ideas with state of the art technology to create its unique, multi-channel properties. 7ate9 has the privilege to collaborate with Disney, Nickelodeon, Universal, Warner Brothers, and others to invigorate top global franchises like Mickey Mouse, Looney Tunes and Disney Princess. Based in Los Angeles, CA and Toronto, Canada, 7ate9’s credits include the Emmy award-winning Disney Channel Games, Nickelodeon’s Massive Monster Mayhem, and the celebrity kids’ series, Best Day Ever.

About Nickelodeon International
Nickelodeon, now in its 38th year globally, has built a diverse, global business by putting kids first in everything it does. The company includes television programming and production in the United States and around the world, plus special events, consumer products, digital, recreation, books and feature films. Nickelodeon is one of the most globally recognized and widely distributed multimedia entertainment brands for kids and family, with 1.2 billion cumulative subscriptions in more than 500 million households across 170+ countries and territories, via more than 100+ locally programmed channels and branded blocks. Outside of the United States, Nickelodeon is part of Viacom International Media Networks, a division of Viacom Inc. (NASDAQ: VIAB, VIA), one of the world’s leading creators of programming and content across all media platforms. For more information or artwork, visit http://www.nickpress.com. Nickelodeon and all related titles, characters and logos are trademarks of Viacom Inc.

Disclaimer
This press release contains “forward-looking statements” under applicable securities laws with respect to DHX Media including, without limitation, statements regarding the business strategies and operational activities of DHX Media, including the timing and location of broadcasting of DHX Media’s Massive Monster Mayhem and the potential for and forms of consumer product licensing of Massive Monster Mayhem. Although the Company believes that the expectations reflected in such forward-looking statements are reasonable, such statements involve risks and uncertainties and are based on information currently available to the Company. Actual results or events may differ materially from those expressed or implied by such forward-looking statements. Factors that could cause actual results or events to differ materially from current expectations, among other things, include the ability of the Company to execute on licensing arrangements, consumer preferences and risk factors discussed in materials filed with applicable securities regulatory authorities from time to time including matters discussed under “Risk Factors” in the Company’s most recent Annual Information Form and annual Management Discussion and Analysis, which also form part of the Company’s annual report on Form 40-F filed with the U.S. Securities and Exchange Commission. These forward-looking statements are made as of the date hereof, and the Company assumes no obligation to update or revise them to reflect new events or circumstances, except as required by law.