Amazon is already the home to popular DHX Media kids’ content, including Mighty Jungle, In the Night Garden, Bo on the GO! and more

Halifax, NS – 25 July 2016 – DHX Media (or the “Company”) (NASDAQ: DHXM; TSX: DHX.A, DHX.B), the world’s leading independent, pure-play kids’ content company, has licensed season one of its new animated comedy series Looped, exclusively for Amazon Prime members in the U.S to stream or download via the Amazon Video app for TVs, connected devices including Fire TV, mobile devices and online at www.amazon.com/primevideo. This original kids’ series will debut on Prime Video in the U.S. on July 25.

In addition, DHX Media will add five seasons of the classic children’s series The Busy World of Richard Scarry, the first season of the much-loved Madeline series, and the feature special Madeline Sing Along with her Friends, to the U.S. Prime Video catalogue, bringing more popular kids content to the catalogue for Prime members to enjoy.

Josh Scherba, SVP Distribution at DHX Media, said, “We are thrilled that Amazon Prime members will be first in the U.S. to see our terrific new animated show, Looped. This Amazon exclusive highlights the strong market for DHX’s original content, and the agreement for The Busy World of Richard Scarry and Madeline underscores the enduring appeal of our classic kids’ titles in today’s on-demand environment. These deals reflect the growing investment that leading streaming services such as Amazon Prime are making to offer distinctive, high-quality children’s programming for their subscribers.” 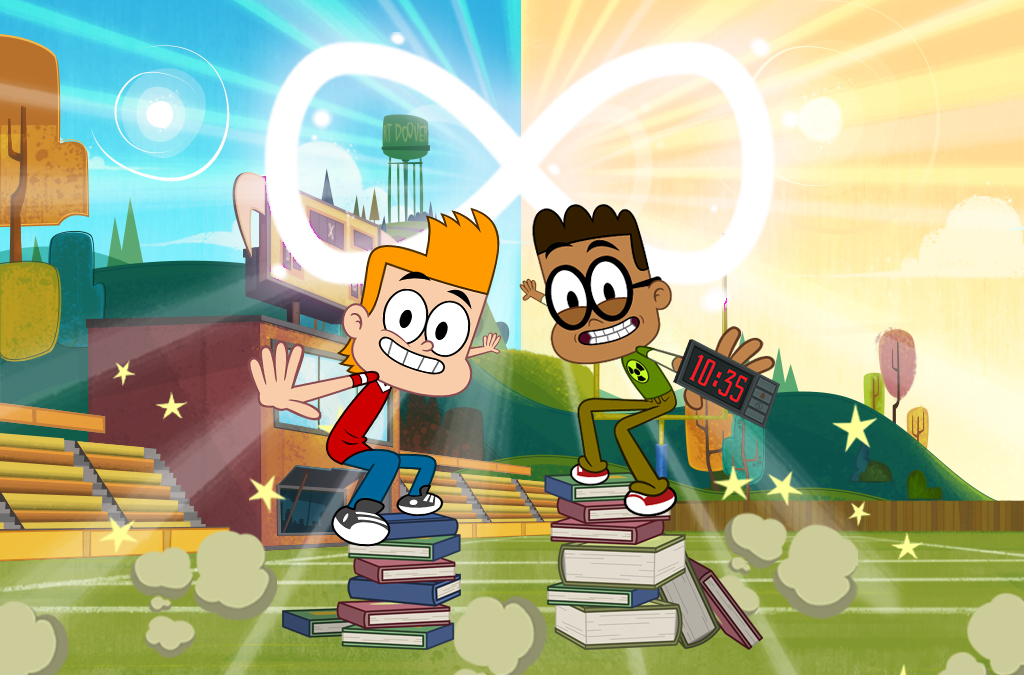 Looped – Ever wish your life had a reset button, or you knew you were having a pop-quiz before it was popped? Wish you looked like a hero in front of that super cute girl, or knew the star quarterback’s moves before he did? Spoiler alert! In the new animated series Looped, Luc and Theo can do all those things and more. That’s because Luc and Theo are stuck in a time-loop where every day is the same Monday! Produced at DHX Studios and commissioned by TELETOON in Canada, the 2D-animated Looped is filled with the kind of silly and hilarious fun that kids 6-11 love. Looped is created by Todd Kauffman and Mark Thornton of Neptoon Studios, award-winning veterans in the animation industry. (The pair created and directed Grojband. Kauffman also previously co-created Sidekick.)

Madeline
“In an old house in Paris that was covered with vines, lived twelve little girls in two straight lines…” So begin each of Ludwig Bemelmans’s magical stories about little Madeline, the smallest and most mischievous of 12 girls at a Paris convent school. With beautiful, soft brushstroke animation, lively songs and captivating storylines, Madeline has become a timeless classic loved by children worldwide. Season one of Madeline consists of six half-hours, and Madeline Sings Along with Friends is a 30-minute special.

Disclaimer
This press release contains “forward-looking statements” under applicable securities laws with respect to DHX including, without limitation, statements regarding, the Company’s library of content, the debut and availability of certain DHX programs via Amazon prime, the business strategies and operational activities of DHX, and the markets and industries in which it operates. Although the Company believes that the expectations reflected in such forward-looking statements are reasonable, such statements involve risks and uncertainties and are based on information currently available to the Company. Actual results or events may differ materially from those expressed or implied by such forward-looking statements. Factors that could cause actual results or events to differ materially from current expectations, among other things, include risk factors discussed in materials filed with applicable securities regulatory authorities from time to time including matters discussed under “Risk Factors” in the Company’s Annual Information Form and annual Management Discussion and Analysis, which also form part of the Company’s annual report on Form 40-F filed with the SEC. These forward-looking statements are made as of the date hereof, and the Company assumes no obligation to update or revise them to reflect new events or circumstances, except as required by law.