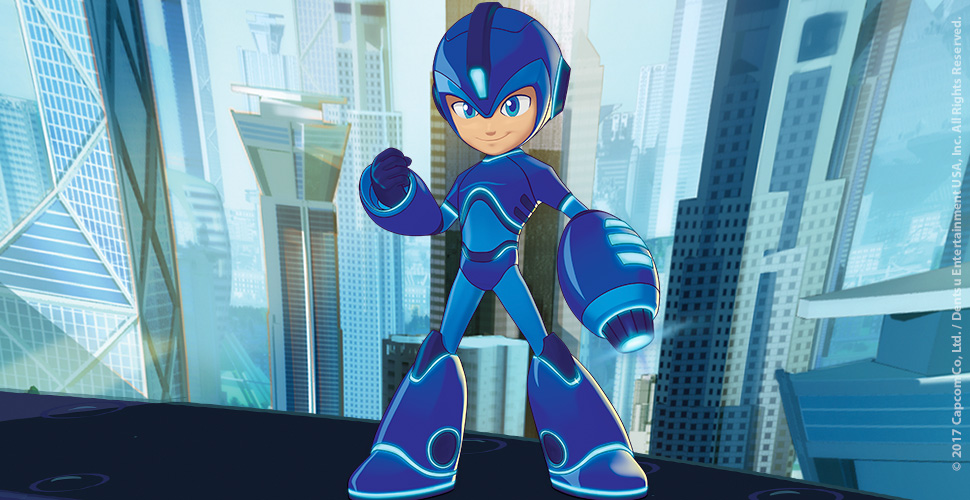 Based on Capcom’s legendary Mega Man video game franchise, the 3D animated series goes into production this summer at DHX Media’s Vancouver studio and underscores the company’s strategy to reboot classic kids’ brands that have potential to drive growth across multiple revenue streams. Man of Action Entertainment (Ben 10, Generator Rex, and the creators of the characters and team featured in Big Hero 6) will write and executive produce the series in collaboration with DHX Media and Dentsu Entertainment. Cartoon Network U.S. and DHX Media’s Family CHRGD in Canada have licensed the show for broadcast.

Peter Byrne, EVP, DHX Brands, said: “With 30 years of heritage, Mega Man is a truly iconic kids’ brand. We’re looking forward to working with JAKKS to bring an inspirational range of toys to a whole new audience. It’s an exciting addition to the DHX Brands portfolio.”

“I grew up with Mega Man and am a big fan, so I’m thrilled for JAKKS to team up with DHX Brands and Dentsu on the new animated series,” said Jack McGrath, COO, JAKKS Pacific. “JAKKS will bring to life the characters of this terrific franchise through a wide range of toys and costumes for a new generation of kids.”

Aimed at kids 6 to 11, the new Mega Man animated series will feature exciting new technologies and robots, as well as the introduction of Mega Man’s alter-ego, Aki Light. Aki is a regular, upbeat schoolboy robot who has nano-core technology that allows him to transform into the mega-powered super hero, Mega Man. With his Mega Buster arm cannon and iconic helmet, Mega Man battles the wickedest villains Silicon City has to offer. Beloved characters such as Mega Man’s robotic dog, Rush, will return, while new characters will make their debut.

The Mega Man franchise is grounded in a series of video games, first launched in 1987 by Capcom, featuring battles fought by the eponymous blue robot protagonist and an ongoing cast of allies and enemies. The Mega Man multiverse has spawned over 130 video games on multiple gaming systems, selling over 31 million copies worldwide, as well as a plethora of toys, comics and collectibles. A highly rated Mega Man TV series was popular in the USA in the mid-1990s and aired on ABC Family.

About CPLG
CPLG (www.cplg.com) is one of the world’s leading entertainment, sport and brand licensing agencies with offices in the UK, Benelux, France, Germany, Italy, Spain, Sweden, Poland, Middle East, Greece & Turkey and the US. Owned by DHX Media (www.dhxmedia.com) a leader in the creation, production and licensing of family entertainment rights, CPLG has more than 40 years of experience in the licensing industry. It provides each of its clients with dedicated licensing and marketing industry professionals and a fully-integrated product development, legal and accounting service.  CPLG believe that partnership is about clarity, openness and trust, and is widely known for its no-nonsense, straightforward approach; Expert Common Sense.

About JAKKS Pacific, Inc.
JAKKS Pacific, Inc. (NASDAQ: JAKK) is a leading designer, manufacturer and marketer of toys and consumer products sold throughout the world, with its headquarters in Santa Monica, California. JAKKS Pacific’s popular proprietary brands include BIG-FIGS™, XPV®, Max Tow™, Disguise®, Moose Mountain®, Funnoodle®, Maui®, Kids Only!®; a wide range of entertainment-inspired products featuring premier licensed properties; and, C’est Moi™, a skincare and performance make-up brand.  Through JAKKS Cares, the company’s commitment to philanthropy, JAKKS is helping to make a positive impact on the lives of children.  Visit us at www.jakks.com and follow us on Instagram (@jakkstoys), Twitter (@jakkstoys) and Facebook (JAKKS Pacific).

About Man of Action Entertainment
Man of Action Entertainment are Joe Casey, Joe Kelly, Duncan Rouleau and Steven T. Seagle, the writers’ collective behind comic’s largest franchise characters as well as original characters published by their Man of Action imprint at Image Comics. Their creations include Ben 10, the $4.5 billion boys’ action franchise for which they’re executive producing the new iteration, and Generator Rex, both for Cartoon Network. Dentsu handpicked them to create, write and executive produce the all-new Mega Man series coming to Cartoon Network next year and they also created the upcoming Zak Storm series for Zag. They also launched Disney XD’s Marvel’s Ultimate Spider-Man and Marvel’s Avengers Assemble as EXP/writers. Man of Action created the characters and team featured in Big Hero 6, Disney/Marvel’s Academy Award®-winning feature. In addition to creating successful video games, toy lines and comic books, Man of Action are the creator/producer/writers of current and upcoming feature films and live-action TV series based on their original comic books and graphic novels including I Kill Giants, Officer Downe, Kafka, The Crusades and The Great Unknown.

Disclaimer
This press release contains “forward-looking statements” under applicable securities laws with respect to DHX Media including, without limitation, statements regarding the timing of and other matters relating to the production of the Mega Man series, consumer products plans with respect to Mega Man, and the business strategies and operational activities of DHX Media. Although the Company believes that the expectations reflected in such forward-looking statements are reasonable, such statements involve risks and uncertainties and are based on information currently available to the Company. Actual results or events may differ materially from those expressed or implied by such forward-looking statements. Factors that could cause actual results or events to differ materially from current expectations, among other things, include scheduling and other risks associated with the timing of production, the Company’s ability to close and execute on anticipated licensing arrangements, and risk factors discussed in materials filed with applicable securities regulatory authorities from time to time including matters discussed under “Risk Factors” in the Company’s most recent Annual Information Form and annual Management Discussion and Analysis, which also form part of the Company’s annual report on Form 40-F filed with the SEC. These forward-looking statements are made as of the date hereof, and the Company assumes no obligation to update or revise them to reflect new events or circumstances, except as required by law.