Halifax, NS – 21 September 2017 – DHX Brands, the dedicated brand management and consumer products arm of DHX Media (TSX: DHX.A, DHX.B; NASDAQ: DHXM), has teamed up with ABC Kids and The Children’s Group to release a new album in celebration of the Teletubbies 20th anniversary. Featuring a mix of new songs from the series, alongside children’s classics with a Tubby-twist, Big Hugs will be available both digitally and on CD in Australia as of tomorrow, and in the U.K. and U.S. on September 29, 2017. 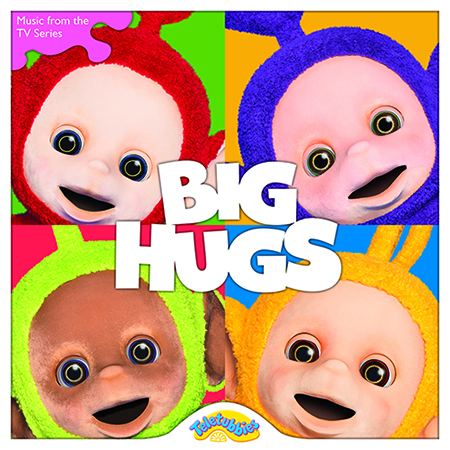 “For 20 years, preschoolers have been singing, dancing and saying ‘Eh-oh!’ along with the Teletubbies, so what better way to celebrate the iconic brand’s 20th anniversary than with a new album?” said Linda Noelle Bush, Music Manager, DHX Media. “The Teletubbies saw tremendous success with the release of their original album in 1997, which was championed by Simon Cowell. The single ‘Teletubbies say Eh-oh’ was a Christmas #1 single in the UK, selling more than 1 million copies. We look forward to enchanting a whole new generation of Teletubbies fans with the release of this new soundtrack.”

“Music and dance are integral parts of the new Teletubbies series and they have been carefully crafted to encourage very young children to express themselves,” said Charlotte Hill, Senior Brand Manager, DHX Brands. “We’re delighted to release this new album, which complements our comprehensive licensing programme, creating yet another consumer touchpoint so that fans can engage with the brand anywhere, at any time. With this new album, and the imminent launch of the theatrical tour, we continue to expand on an entire world of Teletubbies for our young audience.”

Combining the charm of the original, with 21st century technical magic, the new Teletubbies series features songs to delight the latest generation of Teletubbies devotees. Narrator Daniel Rigby lends his vocals to many of the songs, including the title track, ‘Big Hugs,’ the popular ‘Bottom Bump Song’ and ‘Tiddlytubbies Songtime,’ which introduces the world to the Tiddlytubbies. In addition to music from the first two seasons, the 19-song soundtrack features timeless favourites that kids know and love performed by the Teletubbies and Voice Trumpet, Teresa Gallagher. Preschoolers will be moving and grooving to children’s classics such as ‘Five Little Monkeys,’ ‘Four in a Bed’ and ‘Head, Shoulders, Knees and Toes.’

On September 29, Big Hugs will be available for purchase at Walmart, Barnes & Noble, Best Buy, Amazon.com, and iTunes, in the U.S., and HMV, FOPP, Amazon.co.uk and iTunes in the U.K., with distribution handled by The Children’s Group.

ABC KIDS is home to Australia’s favourite children’s music, with trusted and much-loved artists such as The Wiggles, Justine Clarke, Bananas in Pyjamas, Play School, Giggle and Hoot, Jay Laga’aia and more! Our aim is to help create an imaginative world where preschoolers can learn, play and explore.

The Children’s Group has been presenting award-winning educational and motivational music for children for more than 25 years, receiving “Parent’s Choice” recognition for their iconic Classical Kids series, and selling millions of recordings from The Mozart Effect, Fred Penner and Robert Munsch. The Children’s Group is a division of Linus Entertainment, part of the Linus Group of Companies that includes True North Records, Spring Hill Music, and IDLA Associated Label Distribution.