In the 50th Anniversary Year of Apollo 11, Peanuts Also Commemorates the “Dress Rehearsal”—Apollo 10—That Sent Peanuts Into Space As Command and Lunar Module Call Signs “Charlie Brown” and “Snoopy”

Jeff Goldblum and Ron Howard Have a Blast in Peanuts In Space: Secrets of Apollo 10, an Original, Lighthearted Short Film Available for Free in the Apple TV App

In May 1969, NASA’s Apollo 10 mission used a lunar module to “snoop around” the moon’s surface within 50,000 feet, scouting a site for the upcoming Apollo 11 moon-landing. Naturally, the Apollo 10 crew named the lunar module “Snoopy”—and the command module “Charlie Brown.”

As Gene Cernan, Apollo 10’s Lunar Module Pilot once said, “No one remembers Apollo 10—until you tell them our spacecrafts were named Snoopy and Charlie Brown, and they say ‘Oh! I remember!’ ”

Fifty years later, the beagle of many faces will don a new, official Astronaut Snoopy uniform as he and the Peanuts gang celebrate the dual 50th Anniversaries of Apollo 10 and 11 with fans around the globe. 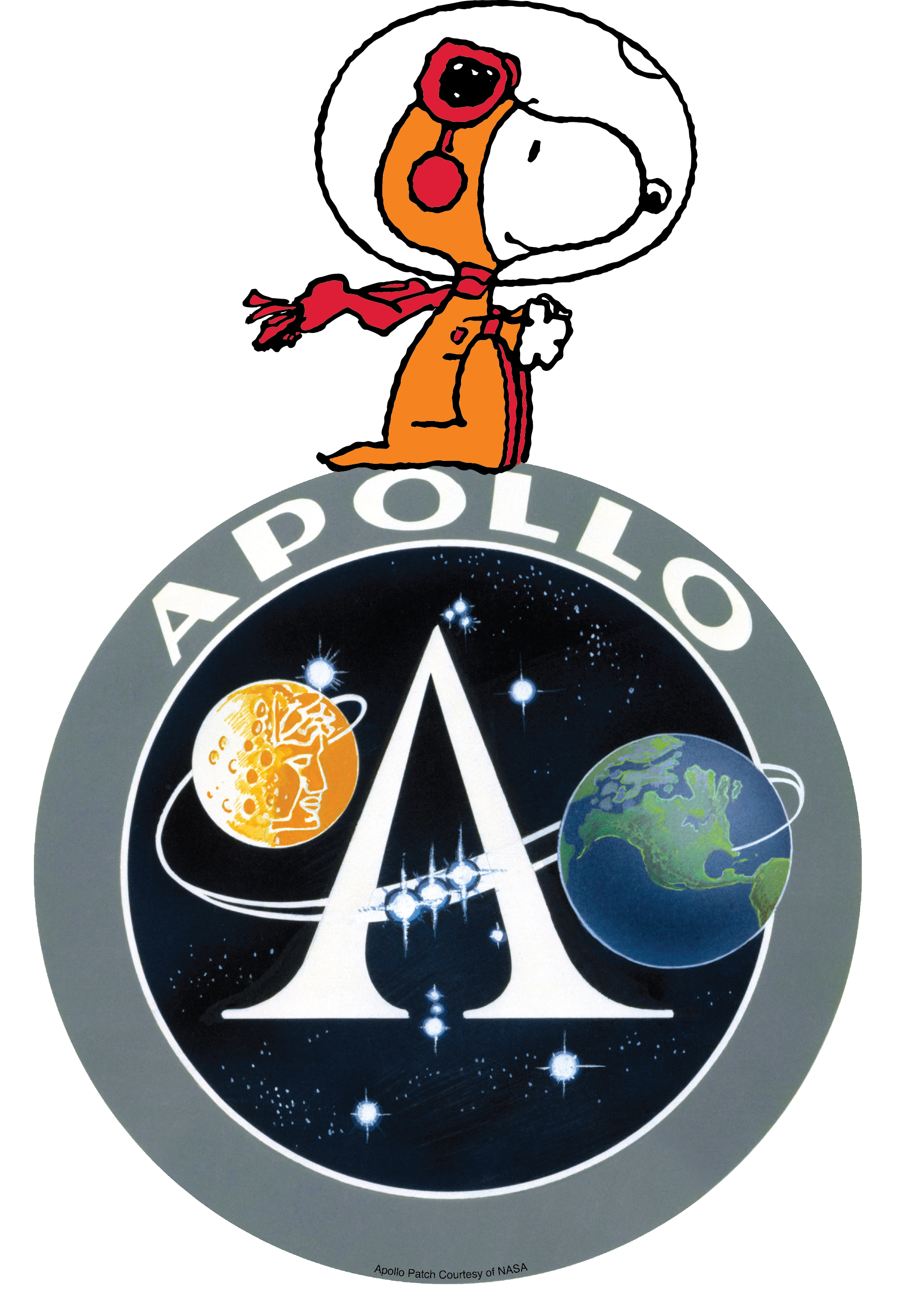 PEANUTS IN SPACE: SECRETS OF APOLLO 10

Oscar-winning director Morgan Neville’s Peanuts in Space: Secrets of Apollo 10 is an affectionate, light-hearted look at the unique relationship between NASA and Schulz’s beloved Peanuts characters. Launched in the US this past May for free in the Apple TV app, the film will debut in the Apple TV app in Japan, Germany, the United Kingdom, Italy, Spain, Brazil, Mexico and France on July 19.

Starring Jeff Goldblum as a self-published NASA historian and Ron Howard as himself, the 9-minute film follows a documentary crew as they try to solve the greatest mystery of all: Was Snoopy a world famous, top-secret astronaut?

FROM SPACECRAFT TO SKATEBOARD

Through a collaboration between Peanuts and The Skateroom, which creates and sells art edition skate decks to fund social skate projects for at-risk youth, six Snoopy- and Apollo-themed skateboards will be released this summer. A limited-edition “VIP” silver finish deck will be sold exclusively at Peanuts’ pop-up store at San Diego Comic-Con; the other five will be available at a variety of art boutiques around the world.

“As a member of the skate community myself, I’m thrilled that Astronaut Snoopy will be featured on these extraordinary skate decks,” says Charles Schulz’s daughter Jill Schulz, owner and director of All Wheel Sports, which creates and presents extreme sports productions. “This partnership combines the best of all worlds—Snoopy + sport + art + benefitting young people around the world—and my dad would have enthusiastically approved.”

From July 18–21, Peanuts will offer San Diego Comic-Con visitors a stellar array of exhibits, limited-edition Apollo-inspired merchandise, and meet-and-greets with Astronaut Snoopy himself.

Among the highlights: “To the Moon: Snoopy Soars with NASA,” an exhibition from the Charles M. Schulz Museum in Santa Rosa, California, presenting a vision of the Apollo journey seen through Charles Schulz’s eyes. Guests will also be treated to select clips of Peanuts in Space: Secrets of Apollo 10.

Known for attracting enthusiastic crowds to its convention booth and its pop-up shop, Peanuts will have plenty of fresh surprises this year. In addition to the limited-edition skateboard, aficionados can touch (and purchase!) a piece of history via replicas of an original 1960s-era Snoopy + Apollo safety poster and a motivational Snoopy ALL SYSTEMS ARE GO! pennant, along with vintage-inspired t-shirts, an Astronaut Snoopy plush in Apollo-era white space suit, collectible pins, and more.

HIGH-FLYING CANINE CHARTS A COURSE AROUND THE WORLD

Beyond San Diego, Astronaut Snoopy will appear at Apollo anniversary celebrations at a variety of significant international space hubs. Stateside, Snoopy will join veteran and current astronauts for a star-studded parade in Cocoa Beach, Florida (July 13) and will touch down at events on the National Mall in Washington, D.C. (July 18-20). Snoopy will then wing his way to France for a countdown to Neil Armstrong’s first steps on the moon at Cité de l’espace (“City of Space”) in Toulouse (July 20).

“Of all his many imaginative personae, Astronaut Snoopy may be the most reality-based guise our beloved beagle has ever adopted,” adds Roz Nowicki, Executive Vice President, Peanuts Worldwide. “After all, he really did go to the moon—not only in Sparky’s comic strip, but in real life. Joe Cool fans should be on the lookout, as Snoopy will be front and center at all these epic events, among others, this summer.”

Starting as early as 1959, NASA advocate Charles Schulz began incorporating space-exploration themes into his comic strip. During the Apollo missions, Schulz gave NASA permission to use Snoopy on its safety materials. The partnership reached new heights in 1969, when NASA sent Peanuts into space. In July 2018, NASA and Peanuts Worldwide looked to the future with the signing of a multi-year, formal Space Act Agreement, supporting fresh entertainment content plus STEM-based educational materials for the next generation.

Charles M. Schulz first introduced the world to the Peanuts characters in 1950, when the Peanutscomic strip debuted in seven newspapers. Since then, Charlie Brown, Snoopy and the rest of the Peanuts gang have made an indelible mark on popular culture. Peanuts animated specials and series air on major networks and streaming services, including ABC, Cartoon Network and Boomerang in the U.S., Family Channel in Canada, and the WildBrain network on YouTube worldwide. Fans also enjoy Peanuts through thousands of consumer products around the world, amusement parks attractions, cultural events, social media, and a daily comic strip available in all formats from traditional to digital. In 2018, Peanuts partnered with NASA on a multi-year Space Act Agreement designed to inspire a passion for space exploration and STEM among the next generation of students. The Peanuts characters and related intellectual property are 41% owned by DHX Media (TSX: DHX, NASDAQ: DHXM), 39% owned by Sony Music Entertainment (Japan) Inc., and 20% owned by family of Charles M. Schulz.