A GIANT LEAP FOR BEAGLEKIND! IN A MACY’S THANKSGIVING DAY PARADE® FIRST, NASA ASTRONAUTS AND ASTRONAUT SNOOPY LAUNCH FESTIVITIES WITH GREETINGS FROM SPACE

Along the Parade Route, Two Former NASA Astronauts Joined the Peanuts Gang Aboard the Snoopy’s Doghouse Float, Highlighting a Peanuts-NASA Relationship That Promotes STEM Education for Students As NASA Prepares to Go Back to the Moon and On to Mars

Snoopy, the Longest-Running Character Balloon in the Macy’s Parade, soared for his 40th flight down the Streets of Manhattan and his Second time as Astronaut Snoopy (he First Wore a Space Suit for the 1969 Parade). This time sporting a Brand-New Orange Spacesuit Honoring the 50th Anniversary of the First Moon Landing

New York, NY – November 28, 2019 – As more than 50 million viewers watched the Macy’s Thanksgiving Day Parade® in amazement nationwide, NASA astronauts Christina Koch and Jessica Meir, accompanied by an 8-inch plush of Astronaut Snoopy in a bright orange spacesuit, offered greetings to the 93rd annual Parade from the International Space Station, traveling 17,000 miles per hour more than 200 miles above the Earth. 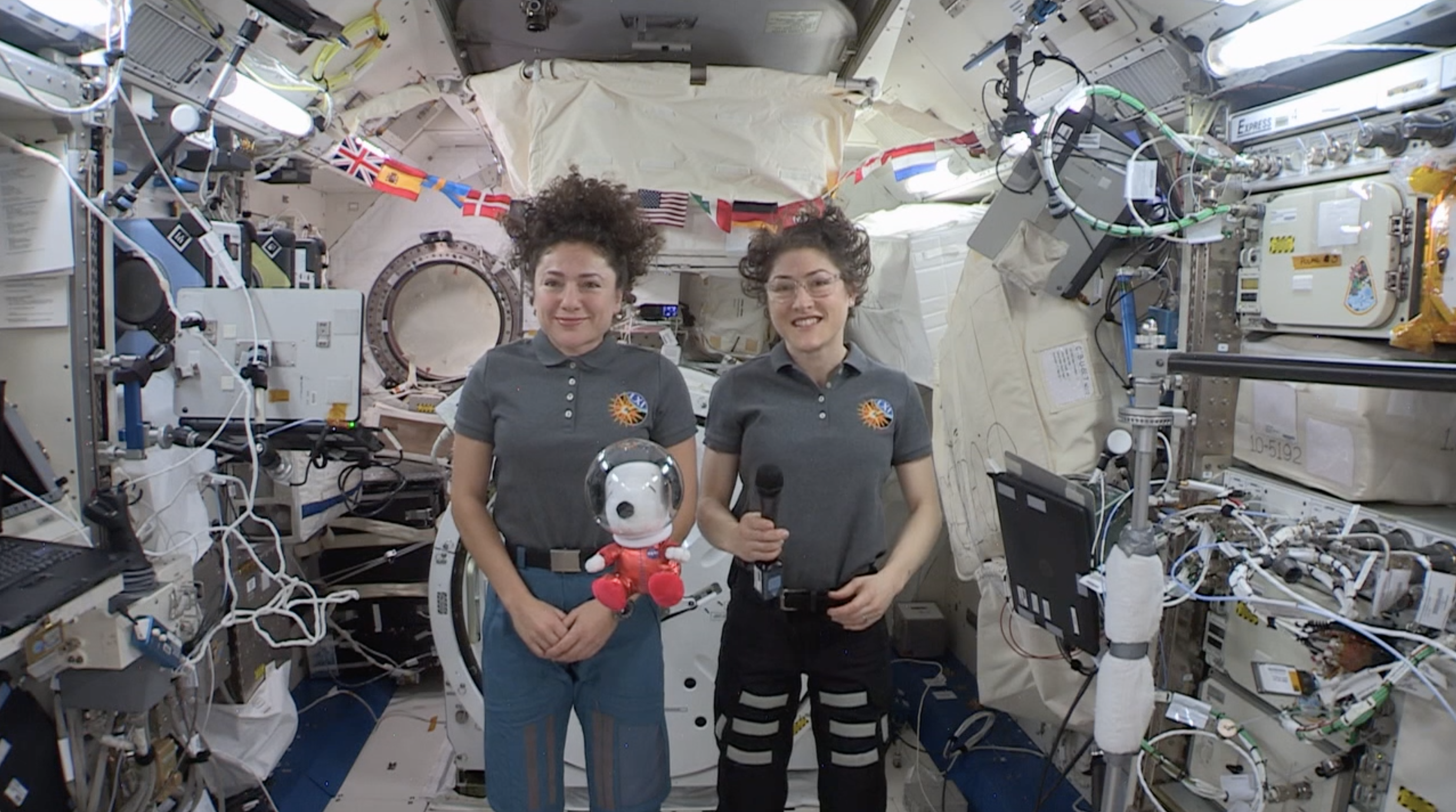 Koch and Meir wished viewers a Happy Thanksgiving as part of the Peanuts-NASA partnership that emphasizes science education for students, as NASA’s new Artemis program prepares to send the first woman and the next man to the Moon. Then it’s “on to Mars!” said Koch. (In Greek mythology, Artemis is the twin sister of Apollo and goddess of the Moon.)

Koch, Meir, and the Snoopy plush concluded the greeting by waving while floating out of view in the microgravity atmosphere of the Space Station.

“It is Peanuts meeting history – what a thrill to see our Peanuts gang join four extraordinary astronauts  (both current and former) as we celebrate historic accomplishments in space exploration— and, even more thrilling, as we anticipate the future discoveries that still await us,” said Jeannie Schulz, widow of Peanuts creator Charles M. “Sparky” Schulz. “My only wish is that Sparky could have been here to see this. He was an enormous admirer of NASA and the extraordinary men and women who work at the agency. He celebrated their work in his comic strips long before the moon landing. He would be proud to know that his beloved characters continue to inspire young people to engage in science education and follow tomorrow’s astronauts to the moon and on to Mars.”

Starting as early as 1959, NASA advocate Charles Schulz began incorporating space-exploration themes into his comic strip. During the Apollo missions, Schulz gave NASA permission to use Snoopy on its safety materials. The relationship reached new heights in 1969, when NASA sent Peanuts into space, through the formation of the Silver Snoopy award. In July 2018, NASA and Peanuts Worldwide looked to the future with the signing of a multi-year, formal Space Act Agreement, supporting fresh entertainment content plus STEM-based educational materials for the next generation.