The International Event Launches at Space Center Houston on April 25, During the 50th Anniversary Celebrations of the Apollo 10 Mission, with the Unveiling of an 18’ by 15’ Retired ISS Training Module, Newly Wrapped in an Original Charlie Brown and Snoopy Motif by Kenny Scharf

The Adventure Continues As “The Heavens and the Earth” Public Art Project with the Houston Arts Alliance Blasts Off, Bringing Insta-Worthy, Peanuts-Inspired Creations to Houston’s Public Parks and Across the City

Worlds collide in the most wildly imaginative and colorful way as the Houston Arts Alliance welcomes the Peanuts Global Artist Collective to Houston’s expanding public parks, downtown business community, and on its history-making NASA campus with a new art installation on display at Space Center Houston.

This unprecedented partnership between Peanuts Worldwide, the Houston Arts Alliance, Houston Parks Board, Space Center Houston and Brookfield Properties brings to Houstonians public art re-imaginings of Charles M. Schulz’s beloved, iconic characters by four of the world’s most acclaimed contemporary artists. The larger-than-life installations will be on view indefinitely at some of the city’s most popular and visited landmarks. 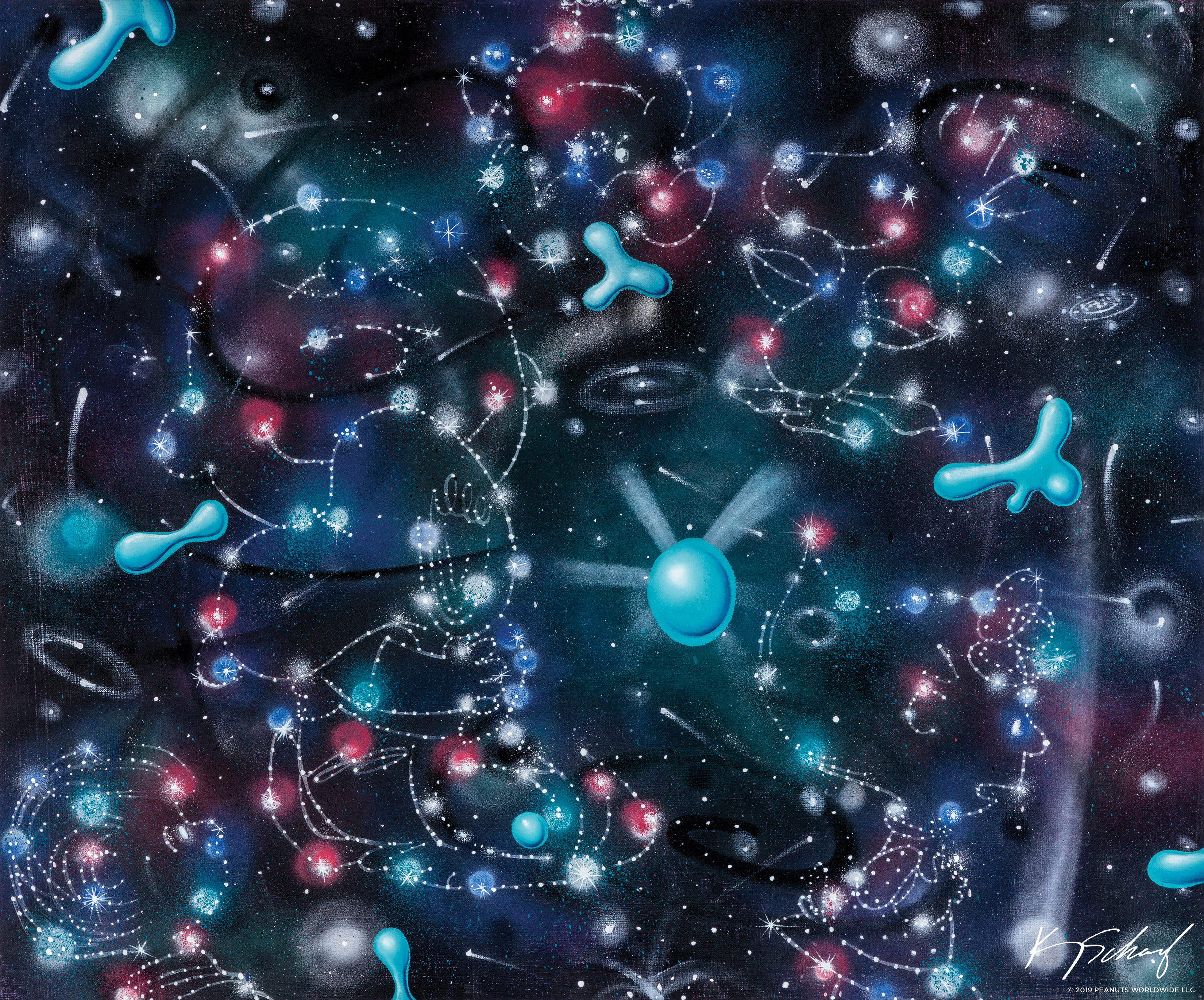 Appropriately entitled “The Heavens and the Earth,” the adventure begins April 25 at Space Center Houston during NASA’s 50th Anniversary celebrations of Apollo 10. To mark this milestone, Scharf will unveil his out-of-this-world rendition of Charlie Brown and Snoopy—uniquely-wrapped around an 18 ’by 15’ retired ISS training module. The public can watch Scharf paint a piece of art live, participate in hands-on Pop-Up Science Labs to learn about how NASA explores the cosmos, and meet Snoopy in-person.

Scharf’s iconography celebrates the longstanding Peanuts-NASA partnership, including that famous moment in time when NASA named the Apollo 10 command and lunar modules “Charlie Brown” and “Snoopy,” respectively. (Apollo 10, which orbited the moon, served as a dress rehearsal for the historic Apollo 11 moon landing in July 1969.)

“My husband, Sparky, was always delighted to celebrate NASA’s achievements in his comic strip,” says Jeannie Schulz, widow of Charles M. Schulz. “He would be as pleased as I am to see the stars align again as Peanuts-inspired art meets space exploration in Kenny Scharf’s breathtaking piece. His highly original and whimsical take on Charlie Brown, Snoopy and the Gang as they soar through our galaxy is the perfect complement to Space Center Houston’s existing collection of famed space artifacts.” (Mrs. Schulz, along with Mr. Schulz’ granddaughter, Stephanie Revelli, Scharf—and Snoopy!— look forward to participating in person in all the events on April 25.)

“I was born the year the Sputnik was launched in 1958,” adds Scharf. “My lifelong obsession with outer space feels like it’s culminating at this moment. Thank you for this opportunity to be a part of NASA’s (and of of course Snoopy’s) legacy. “

Following this starry debut, a series of Peanuts-inspired public art murals created by several of the artists will pop up across the city at sites to be revealed at later dates.

“We are thrilled to bring an iconic institution like Peanuts to Houston,” says Leigh Smith, Board Chair of the Houston Arts Alliance. “Working with Space Center Houston on this project is especially exciting, like bringing those characters home. We were also delighted to have Brookfield and the Parks Board as partners. Peanuts characters, as re-imagined through the work of these remarkable artists, will appear all over the city—in a way that lets every Houstonian and visitor enjoy them.”

For the latest news and openings in Houston and beyond, fans can log on to Peanuts Global Artist Collective. And to participate in the project, residents of and visitors to Houston are encouraged to pose in front of the murals (as thousands of others around the world have), and post to their own Insta using the hashtags #SnoopyGlobalArt and #PeanutsHTX.

About The Peanuts Global Artist Collective

The Peanuts Global Artist Collective, presented by Peanuts Worldwide, was curated by leading public art curators and evangelists Yvonne Force Villareal and Doreen Remen, co-founders of the esteemed New York-based creative consulting firm Culture Corps. Over the course of a year, they evaluated the work of more than 100 different contemporary artists to find collaborators who could uniquely expand upon the themes from Schulz’s oeuvre. Based on their recommendations, Peanuts Worldwide selected seven artists, all of whom share a deep connection to Peanuts and a long-standing commitment to public art. The creators include Mr. A, Nina Chanel Abney, AVAF, FriendsWithYou, Rob Pruitt, Kenny Scharf and Matsuyama Tomokazu. The project debuted in Spring 2018 with public-art installations in Paris, Seoul, New York, San Francisco, Berlin, Tokyo and Mexico City and continues to manifest in a variety of creative and tangible new ways.

The PEANUTS characters and related intellectual property are owned by Peanuts Worldwide, a subsidiary controlled by DHX Media and the family of Charles M. Schulz.

Where to Find/Follow the Peanuts Global Artist Collective

Houston Arts Alliance (HAA) is a local arts and culture organization whose principle work is to implement the City of Houston’s vision, values, and goals for its arts grantmaking and civic art investments. HAA’s work is conducted through contracts with the City of Houston, overseen by the Mayor’s Office of Cultural Affairs. HAA also executes privately funded special projects to meet the needs of the arts community, such as disaster preparation, research on the state of the arts in Houston, and temporary public art projects that energize neighborhoods. In short, HAA helps artists and arts nonprofits be bold, productive, and strong.