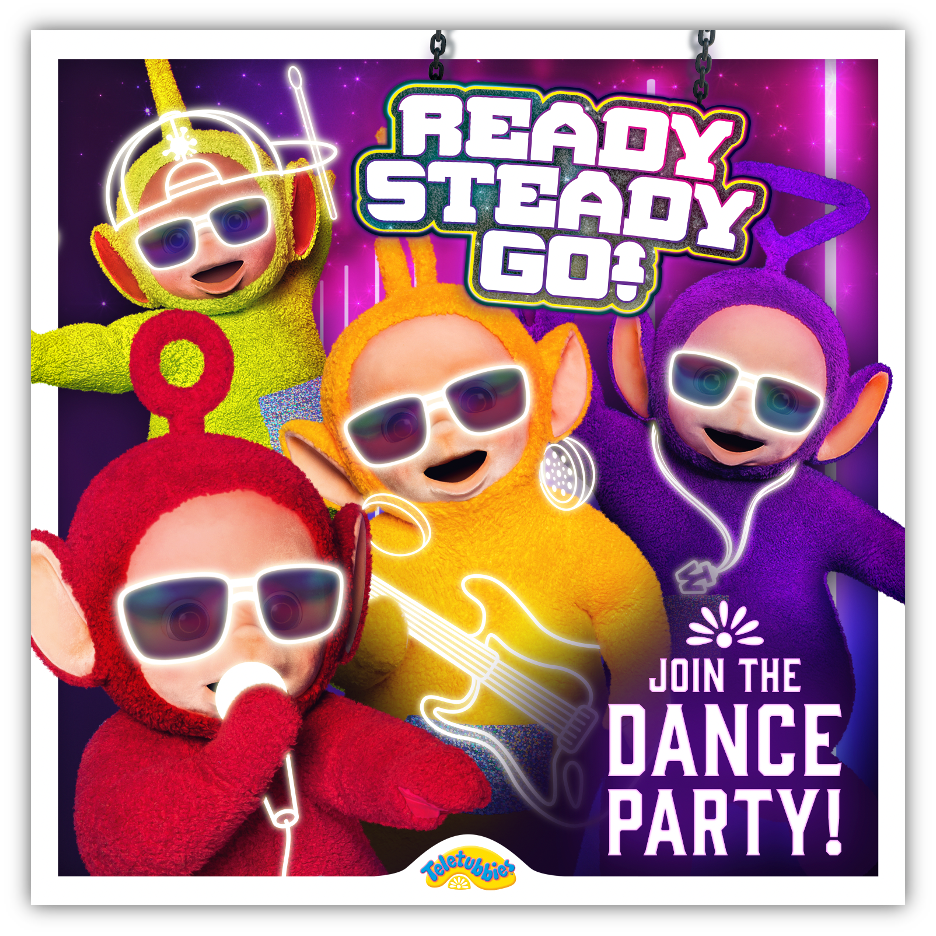 WildBrain’s Teletubbies will debut a double single and video drop on 25th September 2021 and an album release on 15th October 2021, going head-to-head with Coldplay and the Spice Girls in the biggest chart battle of the decade!

London – September 23, 2021: Eh-oh! Get ready for the musical comeback of the decade as WildBrain’s Teletubbies reunite to drop their brand-new album Ready, Steady, Go! After almost 25 years in the entertainment business and a career break that saw the Teletubbies go their separate ways to pursue their individual passions, they’re BACK and ready to show the music industry how it’s done.

Since we last saw the Teletubbies, Tinky Winky relocated to Paris to focus on fashion, Laa-Laa has made a name for herself as a DJ in Ibiza, graffiti artist Dipsy has been enjoying Banksy-esque anonymity and record-breaking artwork sales, and Po has been living a life of enlightenment on a yoga retreat in Thailand. They have now come back together ahead of their 25th anniversary in 2022 to drop a brand-new album and music videos.

The colourful quartet’s new album contains 10 bangers, including the title track ‘Ready, Steady, Go!’ and ‘Peekaboo’, which will double drop on Saturday 25th September 2021, supported by music videos that can be viewed exclusively on the official WildBrain Spark Teletubbies channel on YouTube. Music videos for the remaining eight singles, including future hits like ‘Safari Party’, will follow every subsequent Saturday until 20th November 2021, with the full album available to stream on your favourite music platform from 15th October 2021.

The new Teletubbies album will see the group go head-to-head with Coldplay, who release their ninth studio album Music of the Spheres on 15th October 2021. It is also set to reawaken the much-publicized UK chart battle against the Spice Girls, who release Spice25, a greatest hits compilation marking their own 25th anniversary, on 29th October 2021.  The Spice Girls’ hit ‘Girl Power’ famously stole the coveted Christmas No. 1 spot in 1997 from the Teletubbies after their pop anthem ‘Teletubbies say “Eh-oh!”’ had held the spot for two weeks running. The Teletubbies single remained in the top 100 for 41 weeks to become double platinum certified, selling over 1.3 million copies. Stay tuned to find out which legendary music group will come out on top this time!

For almost 25 years, WildBrain’s Teletubbies have been engaging and entertaining audiences across multiple generations. Seen on broadcasters and streaming platforms around the world – including 29 highly popular YouTube channels on the WildBrain Spark network – the Teletubbies offer hours of content for fans of every age. Through their exuberance and curiosity, Tinky Winky, Dipsy, Laa-Laa and Po foster the developing imaginations of preschoolers in a delightful world filled with joyous exploration, visual anticipation and silly surprises. Extensive social media touch points have also seen the Teletubbies become beloved pop culture icons for older fans, adored by celebrities and culture setters around the world. As a lifestyle brand, Teletubbies continues to captivate audiences by participating in pop culture conversations. The Teletubbies are owned by WildBrain, a global leader in kids’ and family entertainment. Follow the Teletubbies on Twitter and Instagram via @TeletubbiesHQ.

At WildBrain we inspire imaginations to run wild, engaging kids and families everywhere with great content across all media. With approximately 13,000 half-hours of filmed entertainment in our library – one of the world’s most extensive – we are home to such brands as Peanuts, Teletubbies, Strawberry Shortcake, Caillou, Inspector Gadget, Johnny Test and Degrassi. At our 75,000-square-foot state-of-the-art animation studio in Vancouver, BC, we produce such fan-favourite series as The Snoopy Show, Snoopy in Space, Chip & Potato, Carmen Sandiego, Go, Dog. Go! and more. Our shows are enjoyed worldwide in more than 150 countries on over 500 streaming platforms and telecasters, and our AVOD business – WildBrain Spark – offers one of the largest networks of kids’ channels on YouTube, garnering billions of views per month from over 150 million subscribers. We also license consumer products and location-based entertainment in every major territory for our own properties as well as for our clients and content partners. Our television group owns and operates four family entertainment channels that are among the most viewed in Canada. WildBrain is headquartered in Canada with offices worldwide and trades on the Toronto Stock Exchange (TSX: WILD).