Toronto, ON – September 15, 2022 – WildBrain, a global leader in kids’ and family entertainment, will be presenting its beloved brands—Teletubbies, Strawberry Shortcake, Chip and Potato, and In the Night Garden—at Brand Licensing Europe (BLE) in London from September 20-22, as the properties continue to expand around the world with all-new original content, distribution deals and consumer products partnerships. Visit WildBrain’s dedicated licensing agency, WildBrain CPLG, during BLE at Stand B161.

Jim Fielding, WildBrain’s newly appointed Chief Marketing and Brands Officer, said: “I’m delighted to join WildBrain during this time of remarkable growth for our treasured franchises, both on and off the screen. We’re continuing to find innovative ways under our 360-degree strategy to connect with our audiences across multi-platform content and consumer products. Teletubbies, Strawberry Shortcake, Chip and Potato, and In the Night Garden have captured the hearts of audiences around the globe, and we look forward to sharing our new content and consumer products with fans new and old.”

Teletubbies Let’s Go! (52×5’) is a brand-new CG-animated preschool series produced by WildBrain Spark’s digital studio. Set to launch on the official Teletubbies YouTube channel at the end of October, with new episodes appearing weekly, the series delivers all-new stories for today’s generation of kids, featuring iconic characters Tinky Winky, Dipsy, Laa-Laa, and Po, alongside other cherished friends from the Teletubbies universe, including the Tiddlytubbies, Noo Noo, and Tiddly Noo. Fans will meet multiple new sun babies, reflecting the diversity of the Teletubbies’ audience, and brand-new music will be featured in every episode. 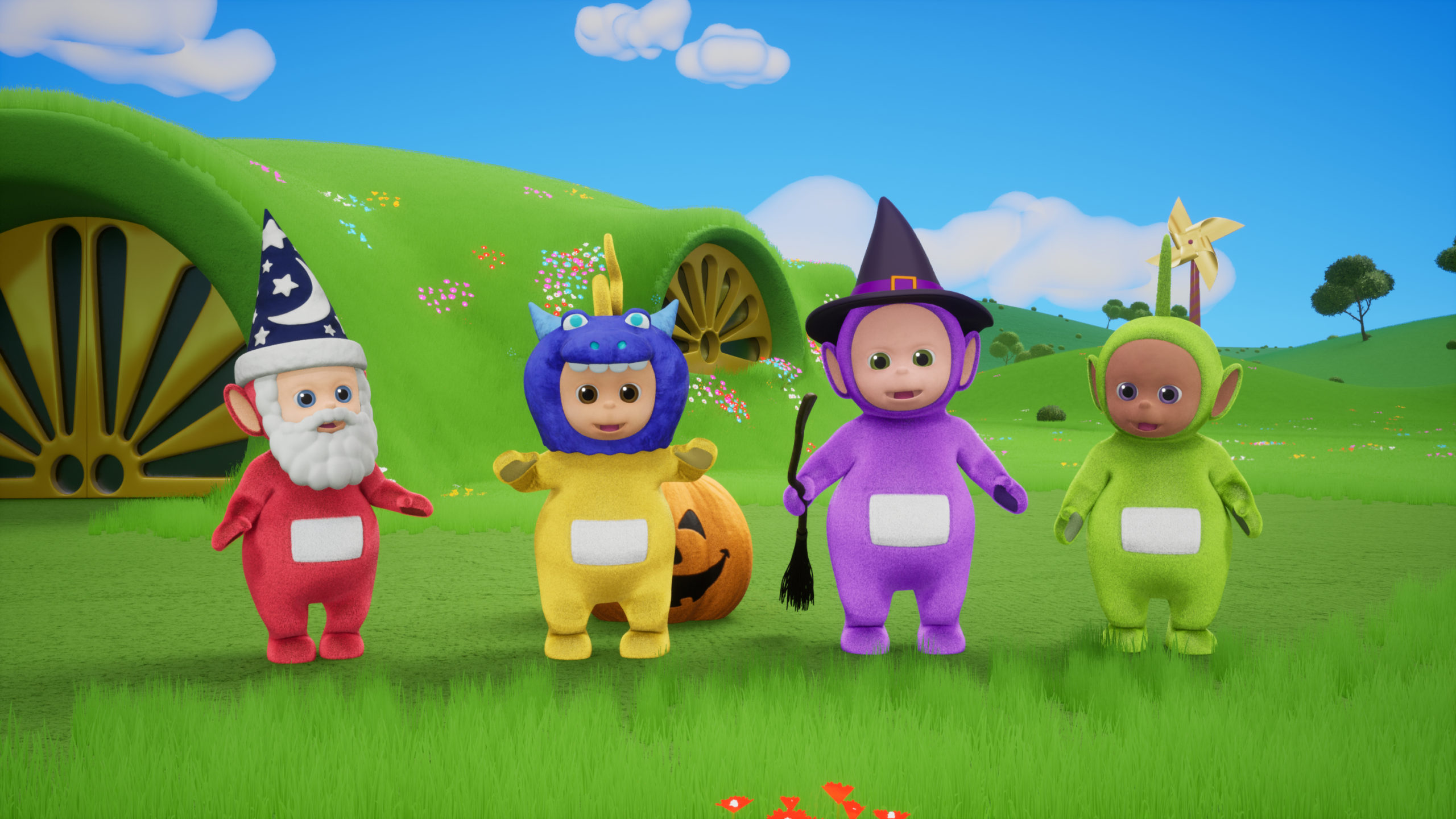 In consumer products, the previously announced Teletubbies x ellesse x GoGuy fashion collaboration will be showcased at BLE as part of the event’s first-ever catwalk, on Wednesday, September 21. The gender-fluid apparel collection, which is now available on GoGuy’s online store continues the extension of Teletubbies for adult audiences who love the brand. Look for some very special guests to join the models on the BLE catwalk! 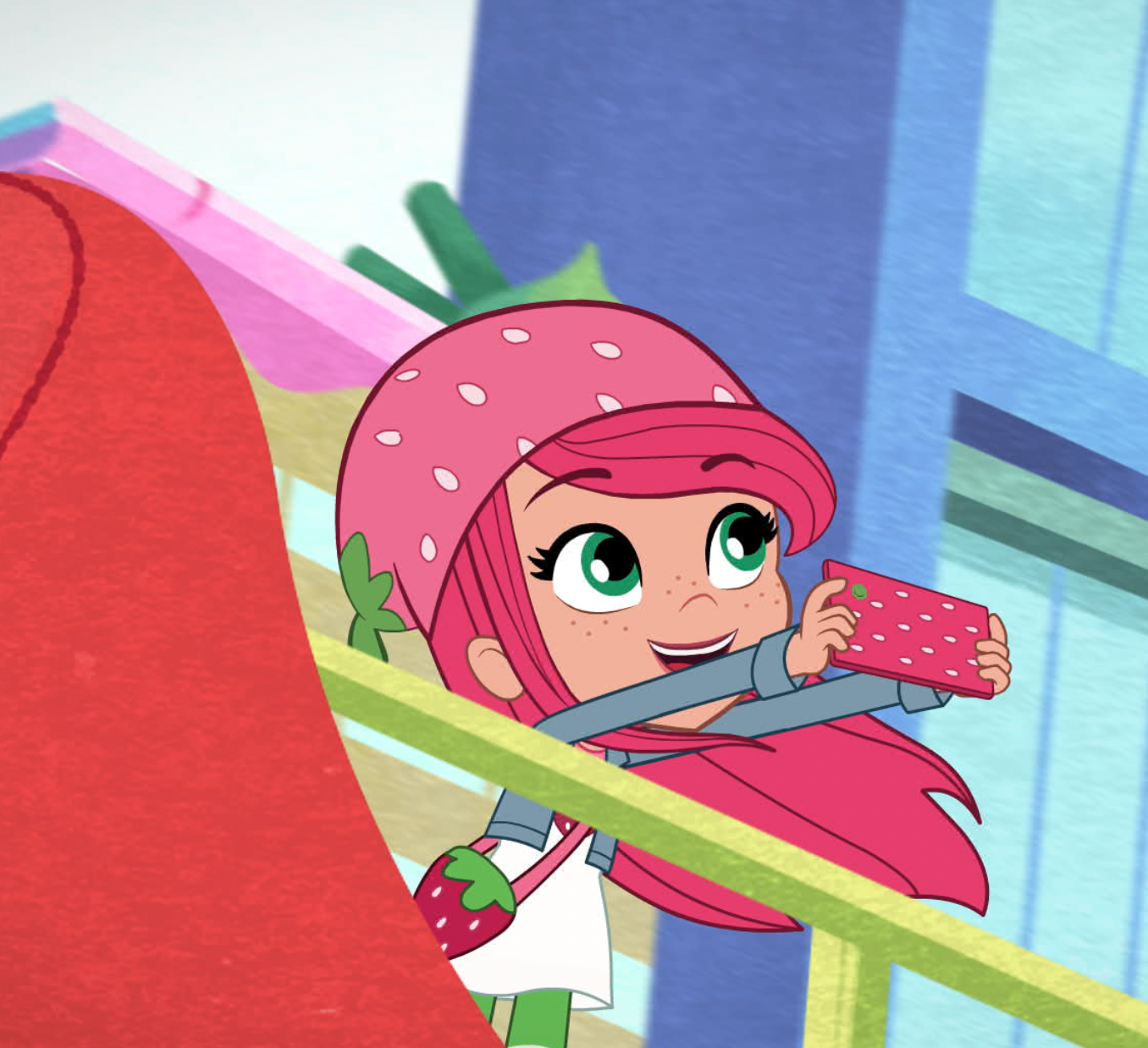 Season one of Strawberry Shortcake: Berry in the Big City launched earlier this year on Netflix, with season two coming September 21. Netflix will also be the worldwide home of four new CG-animated Strawberry Shortcake seasonal specials (4×44’) coming in 2023.

WildBrain has also added multiple new linear and streaming partners for seasons one and two. New partners for season one include Rik (Slovak Republic, Czech Republic), and Club Illico (Canada). New partners picking up both seasons one and two include WildBrain’s French channel Télémagino (Canada), Kids Central (US), and Sandbox Kids (UK, Ireland, US, Canada, France and Ukraine).

Season two of Strawberry Shortcake: Berry in the Big City launches on WildBrain’s own Family Jr. channel in Canada, with a three-episode premiere on October 11 as part of ‘Day of the Girl’. New episodes will continue to rollout Sundays at 7:45am ET beginning October 16. WildBrain Television will also be the Canadian broadcast home for the four Strawberry Shortcake seasonal specials, produced by WildBrain’s Vancouver animation studio.

In consumer products for Strawberry Shortcake, WildBrain’s dedicated licensing agency, WildBrain CPLG, has inked a wave of new partnerships for both the new and classic brand, with merchandise launching in 2023. For classic Strawberry Shortcake, deals have been secured with Loungefly and Funko for bags, accessories and the iconic Funko Pop! vinyl figure. For Strawberry Shortcake: Berry in the Big City, The Canadian Group has been signed for puzzles and games, and Starbound Entertainment for parade balloons, while Anthem Publishing will feature both the new and classic brand in Colouring Heaven Collection and Junior magazines. Inkology is creating stationery across both iterations of the brand. Meanwhile, Penguin Random House publishing are rolling out their first titles for the new series this fall.

In promotional partnerships across the US, Sunkist Growers has renewed it’s in-store “fruitastic” promotional campaign for Spring 2023, while Challenge Butter has launched their own Strawberry Shortcake: Berry in the Big City retail promotion this month, and a special limited-edition “Strawberry Shortcake Sno®” flavour is now available at Bahama Buck’s® throughout September.

More new content is also coming from WildBrain’s preschool hit, Chip and Potato, as season four of the Netflix Original Kids Series is set to drop on the platform October 3. Chip’s ongoing kindergarten adventures have her trying new things, making new friends and even traveling to new places—all with help from her secret mouse pal, Potato. 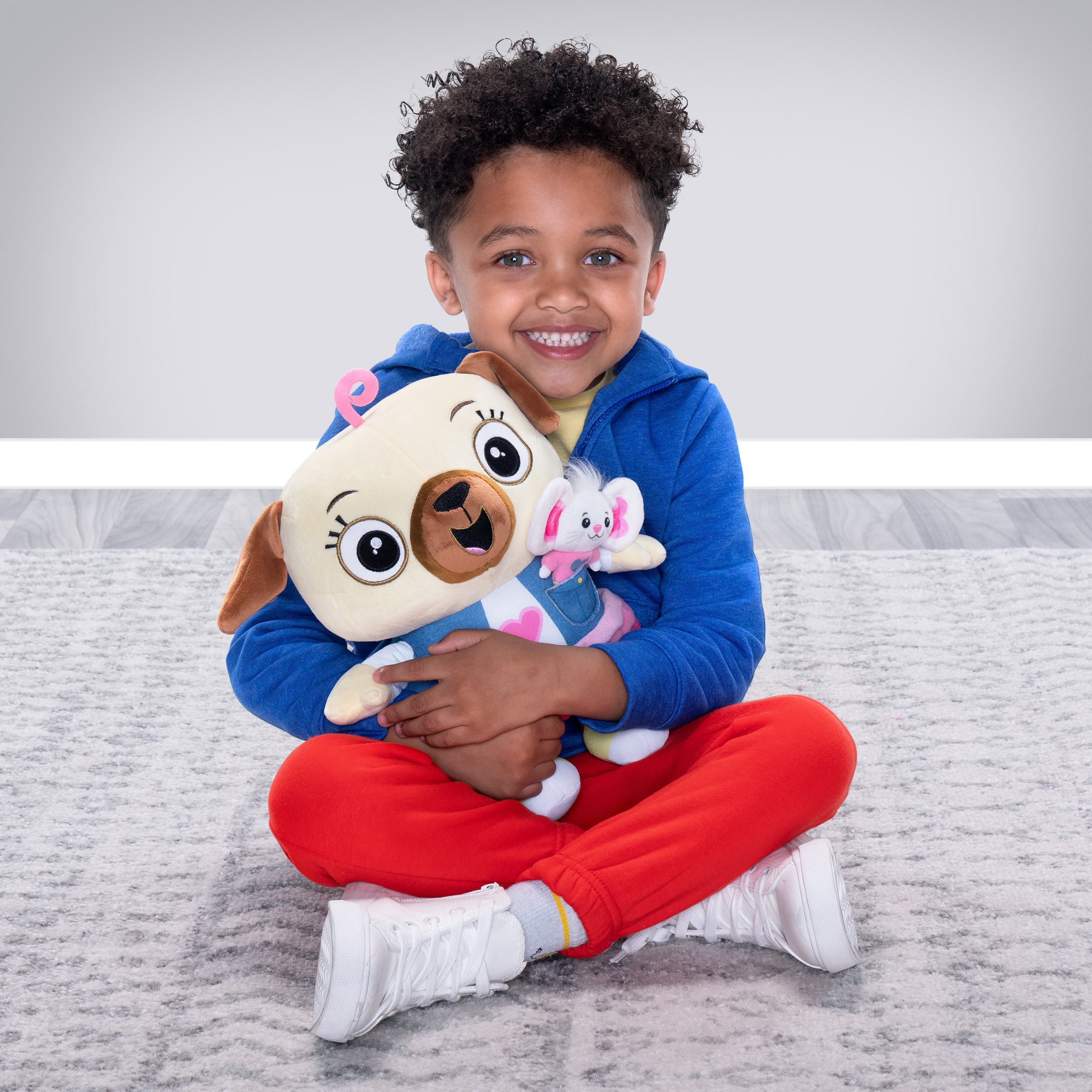 Also in October, JAKKS Pacific will debut its Chip and Potato master toy range in the US. The new plush toys will be available online from Walmart, Amazon and JAKKS Pacific. Meanwhile, Baby Boom, a division of The Betesh Group, is newly signed for Chip and Potato bedding and homewares, with its range launching in the US and Canada from Spring 2023.

What in the world is a Zinkyzzzonk?

The classic preschool series In the Night Garden centers on an enchanted picture-book place populated by toys and fantastical characters and existing between waking and sleeping in a child’s imagination. The new In the Night Garden: Zinkyzzzonk Specials introduces a loveable new character to the brand: the Zonk. When the toys of the Night Garden have trouble falling asleep, it’s up to the magical Zonk to lead them to the ZonkyZoney, an enchanted grove where they can relax in peace and drift off for a pleasant zinkyzzzonk! The Zonk makes sure everything is just right for each toy to fall asleep. Filled with calming sights and gentle sounds and music, the CG-animated In the Night Garden: Zinkyzzzonk Specials join the classic series in providing a cherished part of bedtime routines as little ones journey towards sleep just like the toys onscreen. 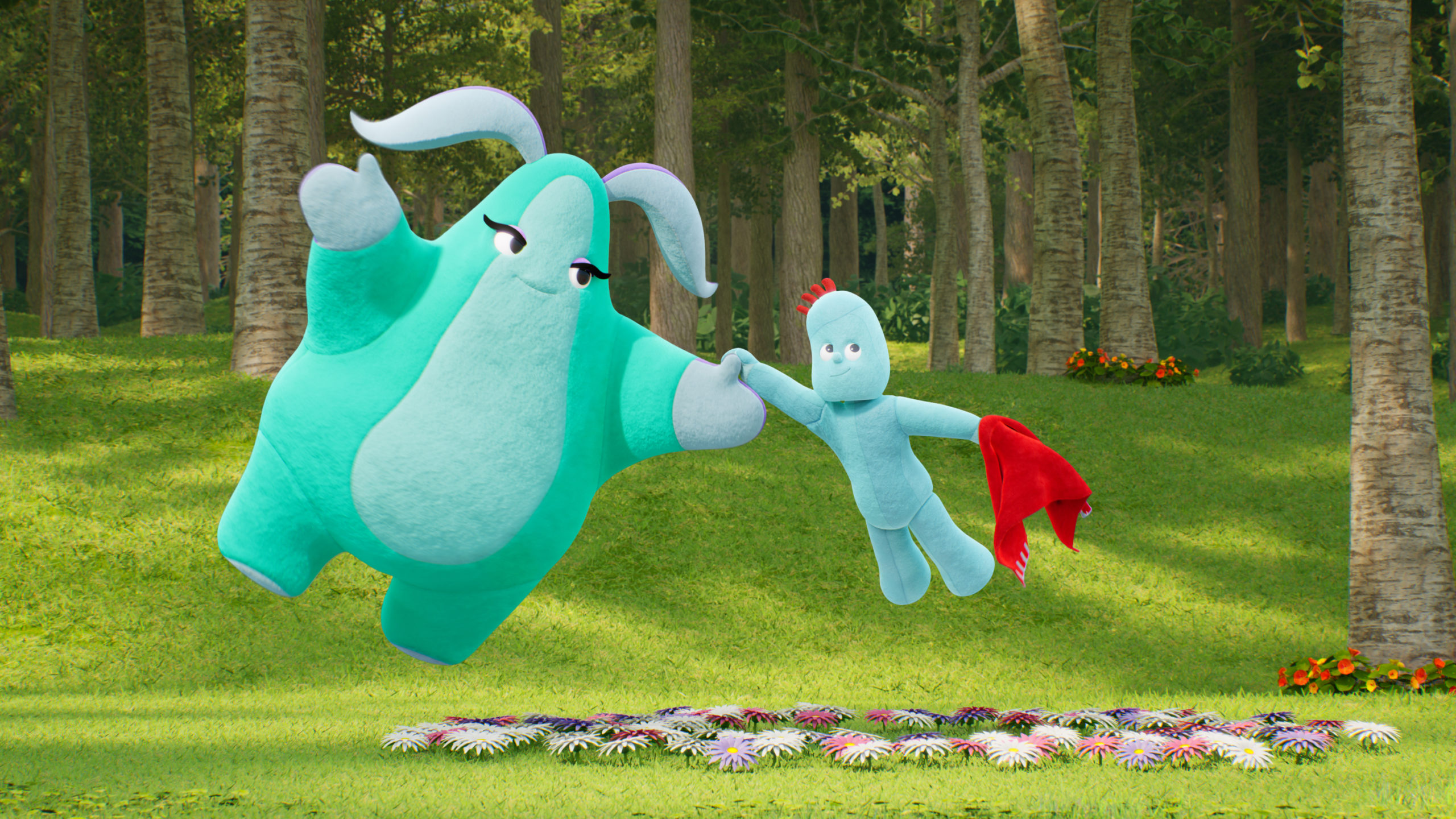 CG animated by WildBrain’s Vancouver studio, the In the Night Garden: Zinkyzzzonk Specials (6×15’) are the first new content in 13 years for the award-winning series. WildBrain has secured an initial deal for the specials with Hop! Channel in Israel, with more to come.

At WildBrain we inspire imaginations to run wild, engaging kids and families everywhere with great content across all media. With approximately 13,000 half-hours of filmed entertainment in our library – one of the world’s most extensive – we are home to such brands as Peanuts, Teletubbies, Strawberry Shortcake, Yo Gabba Gabba!, Caillou, Inspector Gadget, Johnny Test and Degrassi. At our 75,000-square-foot state-of-the-art animation studio in Vancouver, BC, we produce such fan-favourite series as The Snoopy Show, Snoopy in Space, Chip and Potato, Carmen Sandiego, Go, Dog. Go! and more. Our shows are enjoyed worldwide in more than 150 countries on over 500 streaming platforms and telecasters, and our AVOD business – WildBrain Spark – offers one of the largest networks of kids’ channels on YouTube, garnering billions of views per month from over 245 million subscribers. Through our leading agency, WildBrain CPLG, we also license consumer products and location-based entertainment in every major territory for our own properties as well as for our clients and content partners. Our television group owns and operates four family entertainment channels that are among the most viewed in Canada. WildBrain is headquartered in Canada with offices worldwide and trades on the Toronto Stock Exchange (TSX: WILD). Visit us at WildBrain.com.