SNOOPY AND NASA HEAD BACK TO THE MOON FOR ARTEMIS I MISSION!

Back on Earth, the World’s Most Intrepid Beagle Shares the Wonders of the Universe in

In the 1960s, Charles Schulz’s passion for space exploration helped initiate a unique relationship between NASA and Peanuts. That multi-decade partnership is about to start a dramatic new chapter.

In early 2022, Astronaut Snoopy—in plush form, wearing a one-of-a-kind space suit designed to NASA’s safety standards—will again join a groundbreaking NASA mission: serving as the zero gravity indicator for Artemis I, an uncrewed mission that sets the stage for a return to the Moon and beyond to Mars. 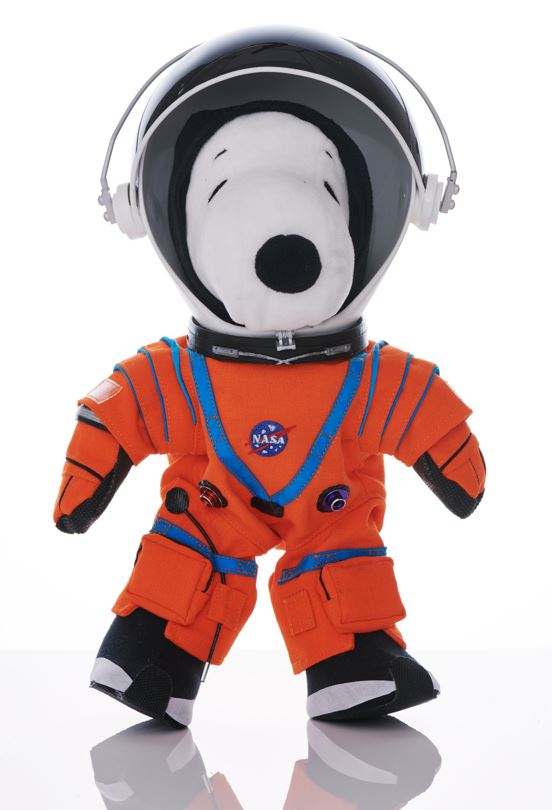 “I will never forget watching the Apollo X mission with my dad, who was so incredibly proud to have his characters participate in making space-exploration history,” says Craig Schulz, son of Charles Schulz and the producer of The Peanuts Movie. “I know he would be ecstatic to see Snoopy and NASA join together again to push the boundaries of human experience.”

And this is just one of several ways in which Peanuts will share the wonders of the universe with fans and audiences of all ages, including the upcoming second season of Daytime Emmy Award-nominated Apple Original series “Snoopy in Space,” and engaging Peanuts–themed STEM materials available for free on multiple platforms.

A Weighty Task in Zero-G

Astronaut Snoopy, wearing a 100% authentic, 10” x 7”, 5-ounce spacesuit made of the exact materials worn by NASA astronauts, will serve as the “zero gravity indicator” during the Artemis I launch in early 2022. This uncrewed mission will help pave the way for a dramatic return to the Moon, featuring the first woman and first person of color to land on the Moon’s surface. The Artemis project will build a long-term base on the Moon, where the knowledge gained will help send the first crewed mission to Mars.

As the zero gravity indicator on Artemis I, Snoopy will provide a visual indicator that the capsule has entered micro-gravity—as will be demonstrated by Snoopy’s weightless acrobatics and somersaults!

While plush toys have served as zero-gravity indicators on other space missions, this Astronaut Snoopy will be unique in the authentic, one-of-a-kind nature of Snoopy’s flight uniform, and represents the latest in a series of partnerships between Peanuts and NASA to engage and educate families about space exploration.

Following its Daytime Emmy Award-nominated first season, beloved Apple Original series “Snoopy in Space” returns to Apple TV+ November 12. With input from NASA and featuring the most entertaining and inspiring of STEM content, “Snoopy in Space: The Search for Life” follows Snoopy and Woodstock as they travel through the universe looking for signs of life beyond Earth. As the journey takes them to Mars, distant moons, and even exoplanets outside our solar system, each episode will incorporate the latest in NASA research, presented in Peanuts’ inimitable and accessible style. “Snoopy in Space” is produced for Apple TV+ by WildBrain Ltd.

On November 15th, GoNoodle, a fast-growing, media, and technology company committed to creating joy, health, and self-discovery in elementary-aged kids (and the adults in their lives), will launch “Snoopy’s Space Week.”  GoNoodle will feature brand-new videos and STEM-based activities dedicated to Snoopy’s space adventures to drive awareness, education, and anticipation of the Artemis launch among millions of kids, parents, and teachers on its “Take Care with Peanuts” Channel.

Leading up to takeoff, GoNoodle will provide teachers with the tools to hold a “Snoopy’s Space Week” November 15–19 in the classroom with free K-5 activities that will get kids thinking about the world outside, get their imagination moving, and help them learn facts about the universe and introductory STEM concepts. The “Take Care with Peanuts” Channel on GoNoodle.com will host original Peanuts documentary videos on the making of Snoopy’s NASA-inspired spacesuit, along with fun and educational activities to help inspire excitement for the launch. A few of the free activities within the activity pack include a Snoopy in Space coloring sheet, a team activity to create your own Artemis badges, and a story-writing exercise about what students would want to explore if they were astronauts.

At the same time, the curriculum specialists at Young Minds Inspired (YMI) will offer free educational materials for grades K–6, including an introduction to the Artemis I mission; the fascinating details about Snoopy’s special spacesuit, a miniature version of NASA’s new generation of spacesuits; and an overview of the groundbreaking Artemis project and why NASA is undertaking such an ambitious plan. The materials will be available at no cost to parents or teachers on both the YMI and Peanuts platforms.

“My father felt that his association with NASA via Peanuts was one of the two most important aspects of his life—the other being his service in World War II!” adds Schulz. “So I am absolutely thrilled that Peanuts will play an ongoing role in NASA’s 21st century exploration with Snoopy’s participation in the Artemis I mission.”

Apple TV+ is available on the Apple TV app in over 100 countries and regions, on over 1 billion screens, including iPhone, iPad, Apple TV, Mac, popular smart TVs from Samsung, LG, Sony, VIZIO, TCL, and others, Roku and Amazon Fire TV devices, Chromecast with Google TV, PlayStation and Xbox gaming consoles.

For more information, visit apple.com/tvpr and see the full list of supported devices.

GoNoodle is a fast-growing, media, and technology company committed to creating joy, health, and self-discovery in elementary-aged kids (and the adults in their lives). We make videos and games that get kids up and moving and developing their wellness, mental health, equanimity, and resilience. GoNoodle is in millions of homes and more than 80% of U.S. public and private elementary schools. Kids love it because it’s fun. Teachers love it because it engages students and reinforces curriculum. Parents love it because it’s meant to fuel their kids and bring them closer. To learn more, visit http://www.gonoodle.com.