FAMILY CHANNEL RAISES ITS VOICE WITH THE PREMIERE OF SPEECHLESS, SEPTEMBER 4

Toronto, 24 August, 2017 – This September, DHX Television’s suite of channels offer an unbe-leaf-able programming lineup the entire family will enjoy. Family Channel delivers the laughs with critically acclaimed sitcoms Speechless and Dr. Ken, while CHRGD pumps up the action with animated adventures Dinotrux and The Deep. Meanwhile, Family Jr. sparks preschoolers’ imaginations with new series Daniel Tiger’s Neighbourhood and Pajanimals. With highly anticipated new series and returning fan-favourites premiering across all three networks, DHX Television’s Fall Schedule is sure to have something for everyone! 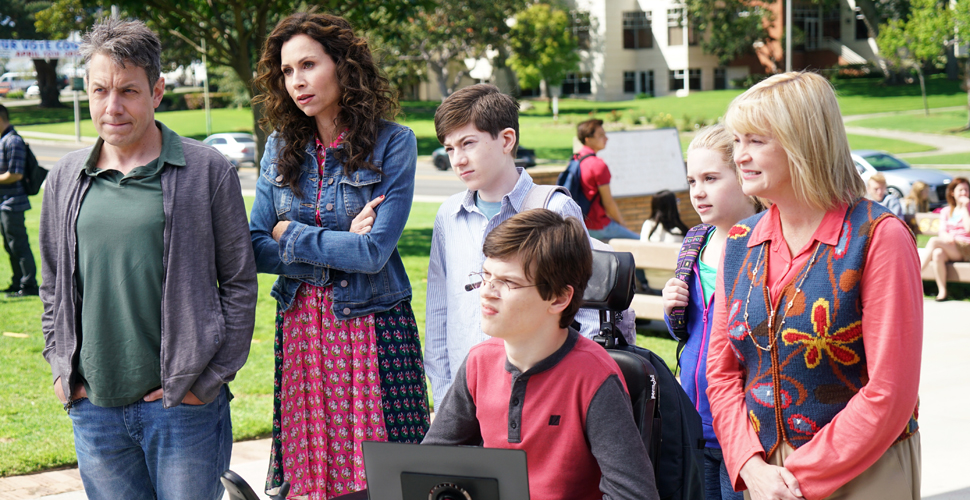 Below is a detailed listing of series featured in DHX Television’s September schedule. All programming is subject to change. High-resolution images for all networks are available at DHX Television’s Media Centre.

Speechless – New Series – Monday, September 4 at 8 p.m.
Maya DiMeo (Minnie Driver, About a Boy), is a mom on a mission who will do anything for her husband Jimmy (John Ross Bowie, The Big Bang Theory), her kids Ray (Mason Cook), Dylan (Kyla Kenedy) and JJ (Micah Fowler), her eldest son with cerebral palsy. As Maya fights injustices both real and imagined, the family works to make a new home for themselves, while also searching for the right person to help give JJ a voice. Season one of this laugh-out-loud comedy is exclusive to Family Channel. New episodes will air regularly Mondays at 8 p.m. beginning September 18.

The Zoo – Series Premiere – Friday, September 8 at 4:30 p.m.
Take a trip to a zoo like no other as Jürgen and his oddball gang of gorillas reveal a secret world of talking animals. From beatboxing tortoises and human-like penguins to vegetarian lions and miniature maniac monkeys, anything is possible at the zoo.

Lego Friends – New Episodes Return – Saturday, September 9 at 10:30 a.m.
The Lego Friends follows the everyday lives of five girls in Heartlake City. Emma, Olivia, Andrea, Mia and Stephanie all have distinct personalities and interests, such as animals, performing arts, invention and design. Each day brings a new adventure for the fabulous friends!

Dr. Ken – New Episodes Return – Monday, September 18 at 8:30 p.m.
With a smart and beautiful wife, two reasonably behaved kids and a loyal but sometimes irritating support staff, Dr. Ken (Ken Jeong, Community) works a job where he gets to help people, while using his unique sense of humour to get him through the day.

“Laughter-school” Programming – Monday to Thursday from 3 to 6:30 p.m.
It’s big laughs and big fun on Family this Fall as kids’ favourite animated characters take over the network’s after school programming block. Fans won’t want to miss brand new episodes from top-rated series including All Hail King Julien, Alvinnn!!! and The Chipmunks, Dragons: Race To The Edge, My Knight and Me and The Adventures of Puss in Boots.

In addition to all the great programming this month, Family is also home to fantastic flicks for the entire family. Movies premiering in September include: Air Bud: World Pup, Air Buddies, Big, Fantastic Mr. Fox and Monkey Up. Check local listings for show times.

The Deep – Season 2 Premiere – Tuesday, September 5 at 6 p.m.
Season two of this animated series continues to follow the adventures of the Nekton family, a brilliant team of underwater explorers. With state-of-the-art technology and an unquenchable thirst for discovery, the Nektons explore the mysterious depths of the ocean, where most of the world lies unexplored and unexplained.

Dinotrux – Series Premiere – Monday, September 11 at 4:30 p.m.
Bulldozing onto CHRGD this fall, this action-packed series from DreamWorks Animation follows Ty the T-Rux (voiced by Andrew Francis, Chesapeake Shores), Revvit the Reptool (voiced by Richard Ian Cox, Max Steel) and the rest of their half-truck, half-dinosaur gang crew as they come face-to-face with the evil D-Structs. It’s up to the crew to destroy them and keep their prehistoric world safe.

Turbo FAST – Season 2 Premiere – Tuesday, September 26 at 4 p.m.
Turbo and his crew return to take Turbotown by storm and set off on a wild ride filled with hilarious hijinks at every turn. From launching into outer space, battling an apocalyptic robot, clashing with a ninja stinkbug and escaping a booby-trapped treasure hunt, you never know what will happen next with this zany crew.

Daniel Tiger’s Neighbourhood – Series Premiere – Monday, September 4 at 5:15 p.m.
An animated continuation of Mister Rogers’ Neighbourhood, Daniel the Tiger shares his daily adventures with his pals while having fun and learning practical skills necessary for growing and developing. Every day, Daniel puts on his red sweater, ties his shoes and invites a new generation of preschoolers into the Neighbourhood of Make Believe.

Pajanimals – Series Premiere – Monday, September 4 at 7:30 p.m.
Featuring four of the most cuddly puppet characters to ever come out of The Jim Henson Company, the Pajanimals explore the world through imaginary adventures from the comfort of their bedroom. Each journey leads to the same discovery: that the world around them is welcoming and safe and that nighttime is a cozy, special time when accompanied by friendship and song.

Throughout September, Family Jr.’s schedule will continue to be sprinkled with preschoolers’ favourite shows with new episodes from Curious George, Super WHY!, Teletubbies, Twirlywoos, Noddy, Toyland Detective, Elias: Rescue Team Adventures, In the Night Garden and more, airing alongside the series mentioned above.

The majority of programming debuting as part of Family, Family CHRGD and Family Jr.’s September schedule will also be available on The Family Channel App as well as each channel’s respective OnDemand service. Additionally, viewers can visit Family.ca, FamilyJr.ca and CHRGD.ca for more information on new series, new specials and new games throughout the fall.