DHX MEDIA SERVING UP A SECOND SEASON OF CLOUDY WITH A CHANCE OF MEATBALLS, THE SERIES

Season two of hit comedy series commissioned by YTV for Canada and licensed to Turner in EMEA, APAC and Latin America

Season one picked up by six more international broadcasters 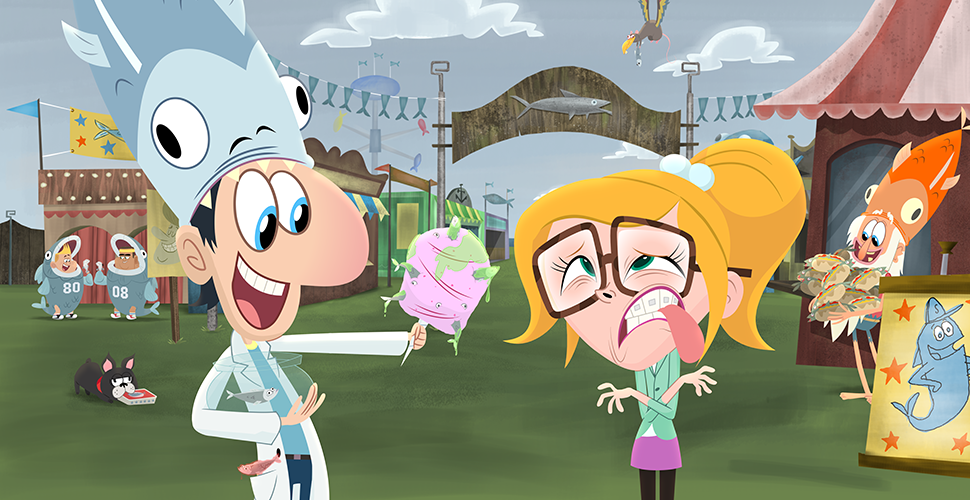 Following the successful international launch of season one last year on Turner’s Cartoon Network and Boomerang channels, as well as on Corus Entertainment’s YTV in Canada, Turner has now picked up season two of the series for its Cartoon Network and Boomerang channels across Europe, Middle East & Africa, Asia-Pacific and Latin America, where it will premiere later in 2018.

In addition, DHX Media has signed new deals for season one of Cloudy with a Chance of Meatballs with France Télévisions, Disney Channel GSA (Germany, Switzerland and Austria), RTL in the Netherlands, ABC Australia, RTP Portugal, and TV3 in Ireland, bringing the total number of distribution deals for season one of the series to twelve.

Josh Scherba, EVP Content and Distribution at DHX Media, said: “Broadcasters around the globe are lining up for Cloudy with a Chance of Meatballs, the series. A commission for season two alongside so many international sales of season one speaks volumes about the popularity and the enduring appeal of these wonderfully entertaining characters and their quirky world. We’re looking forward to creating more hilarious adventures for the intrepid duo, Flint and Sam, and sharing them with fans worldwide.”

Cloudy with a Chance of Meatballs, the series, takes place before the movies, when Flint and Sam are still in school. In season two, Flint Lockwood is still stuck in a town that just doesn’t understand him. Luckily, he and his best friend Sam Sparks don’t let that stop them from having a blast with more inventions, more adventures, and unfortunately for Sam, more sardines! Joining them are the best of Swallow Falls, including the corrupt Principal/Mayor Shelbourne; Flint’s stoic father Tim; Flint’s trusty lab assistant, Steve the monkey; the Mayor’s fawning son, Gil; local teenage baby-celebrity Brent; and Flint’s fellow inventor-slash-nemesis, Hector Evilman. High school and life in Swallow Falls may not be easy, but with these two best friends, it’s always tons of fun!

About Turner International
Turner International operates versions of core Turner brands, including CNN, TNT, Cartoon Network, Boomerang and TCM Turner Classic Movies, as well as country- and region-specific networks and businesses in Latin America, Europe, the Middle East, Africa and Asia Pacific. It manages the business of Pay- and Free-TV-channels, as well as Internet-based services, and oversees commercial partnerships with various third-party media ventures; it teams with Warner Bros. and HBO to leverage Time Warner’s global reach. Turner operates more than 18 channels showcasing 46 brands in 34 languages in over 200 countries. Turner International is a Time Warner company.

About Sony Pictures Animation
Sony Pictures Animation produces a variety of animated and family entertainment for audiences around the world.  The studio is following its worldwide comedy hits—the record-breaking monster comedies Hotel Transylvania and Hotel Transylvania 2, the hybrid live action/animated blockbusters The Smurfs and The Smurfs 2, and the mouth-watering Cloudy with a Chance of Meatballs movies; the fully animated reboot Get Smurfy in March 2017; the inspirational story The Lamb in December 2017; and an animated Spider-Man feature from the minds of directors Chris Miller and Phil Lord in Summer 2018.  The studio, in conjunction with Aardman Animations, has produced two critically acclaimed feature films:  the CG-animated family comedy Arthur Christmas; and the Academy Award® nominated stop-frame animated high-seas adventure, The Pirates! Band of Misfits.  In 2007, Surf’s Up also received an Academy Award® nomination for Best Animated Feature Film.  The division, whose first feature film Open Season led to a very successful movie franchise including the upcoming Open Season: Scared Silly in Spring 2016, turned 10 in 2012.  Sony Pictures Animation is a division of the Sony Pictures Motion Pictures Group.

Disclaimer
This press release contains “forward-looking statements” under applicable securities laws with respect to DHX Media including, without limitation, statements regarding the business strategies and operational activities of DHX Media, including international demand for Cloudy With A Chance Of Meatballs and the timing for the release of new episodes. Although the Company believes that the expectations reflected in such forward-looking statements are reasonable, such statements involve risks and uncertainties and are based on information currently available to the Company. Actual results or events may differ materially from those expressed or implied by such forward-looking statements. Factors that could cause actual results or events to differ materially from current expectations, among other things, include the Company’s ability to execute on license agreements and the risk factors discussed in materials filed with applicable securities regulatory authorities from time to time including matters discussed under “Risk Factors” in the Company’s most recent Annual Information Form and annual Management Discussion and Analysis, which also form part of the Company’s annual report on Form 40-F filed with the U.S. Securities and Exchange Commission. These forward-looking statements are made as of the date hereof, and the Company assumes no obligation to update or revise them to reflect new events or circumstances, except as required by law.