FAMILY JR. REACHES FOR THE SKY WITH THE PREMIERE OF NEW SERIES RAINBOW RUBY ON APRIL 23

Toronto, ON – 14 April 2016 – Mondays on Family Jr. are about to get even brighter as spunky six-year-old Rainbow Ruby makes her way onto the network. Dedicated to inspiring young viewers to follow their dreams, the CGI-animated series follows Ruby as she transports to a magical world where her stuffed animals come to life. The series debuts as a special presentation on Saturday, April 23 at 6:45 p.m. ET before moving to its regular timeslot Mondays at 5:10 p.m. ET on April 25. Rainbow Ruby is the newest addition to network’s “Monday Funday” lineup, with new episodes airing alongside fan-favourites Justin Time, Thomas & Friends, Bob the Builder, Curious George and more. 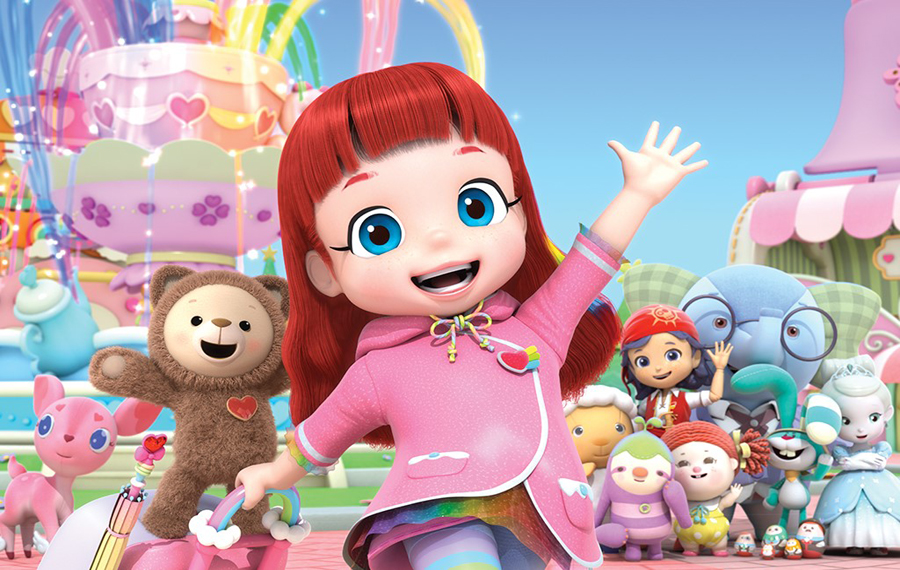 Rainbow Ruby is a little girl with a big imagination, who loves helping her friends and family. Ruby lets her can-do attitude and nurturing spirit pave the way for adventure. But Ruby has a secret: when the magical heart of her beloved teddy bear Choco begins to glow, Ruby knows someone needs help in Rainbow Village! With the help of an enchanted suitcase full of tools and accessories, Ruby can transform herself to take on any job she wants to help out her friends – from a doctor to a chef to a costume designer. Leading into Rainbow Ruby on April 23, Family Jr. saddles up with the movie Lalaloopsy Ponies: The Big Show at 6 p.m. ET.

The magic continues at FamilyJr.ca where young fans and their parents can learn more about the show and its characters, plus, print off fun colouring sheets to bring Ruby home. Select episodes of Rainbow Ruby will also be available on Family Jr. OnDemand beginning April 24.

As previously announced, Rainbow Ruby has recently teamed up with UNESCO in support of girls’ education. Throughout the series, Ruby experiences different professions, introducing young viewers to the concept of a dream job and encouraging them to believe nothing is out of reach. The partnership builds on the “Better Life for Girls” campaign, launched in November 2014 by Rainbow Ruby production house CJ E&M and UNESCO, which aims to help address the lack of access to quality education faced by girls in developing regions.

About Family Jr.
Family Jr. is a commercial-free channel available to English-language subscribers across Canada. Committed to capturing young minds and engaging young hearts, Family Jr., and its complementary French service, Télémagino, inspires imagination and make-believe at every turn with renowned Canadian series and popular preschool brands. Ensuring access is available to subscribers when they want it, where they want it, Family Jr. is also available through Family Jr. OnDemand and Family Jr. Online at no additional cost. Visit us at FamilyJr.ca. DHX Television is comprised of Family Channel, Family CHRGD, Family Jr. and Télémagino, and is part of DHX Media Ltd., a leading creator, producer, marketer and broadcaster of family entertainment. Dedicated to celebrating family fun, DHX Television delivers best-in-class programming through premium subscriptions and its original production mandate, and creates and produces captivating in-market events that appeal to Canadian families. DHX Television is home to world-renowned series including The Next Step, Degrassi: Next Class and Teletubbies. DHX Media Ltd. has offices globally, and is traded on the NASDAQ and Toronto Stock Exchange.