DHX MEDIA, TECHNICOLOR AND A STARK PRODUCTION ANNOUNCE THE GREENLIGHT OF PRODUCTION FOR SEASON TWO OF THE DEEP

Additionally, CPLG, a DHX Media company and one of the world’s leading licensing agencies, has been appointed as multi-territory licensing agent for the brand, including North America, EMEA (excluding Germany) and Latin America. 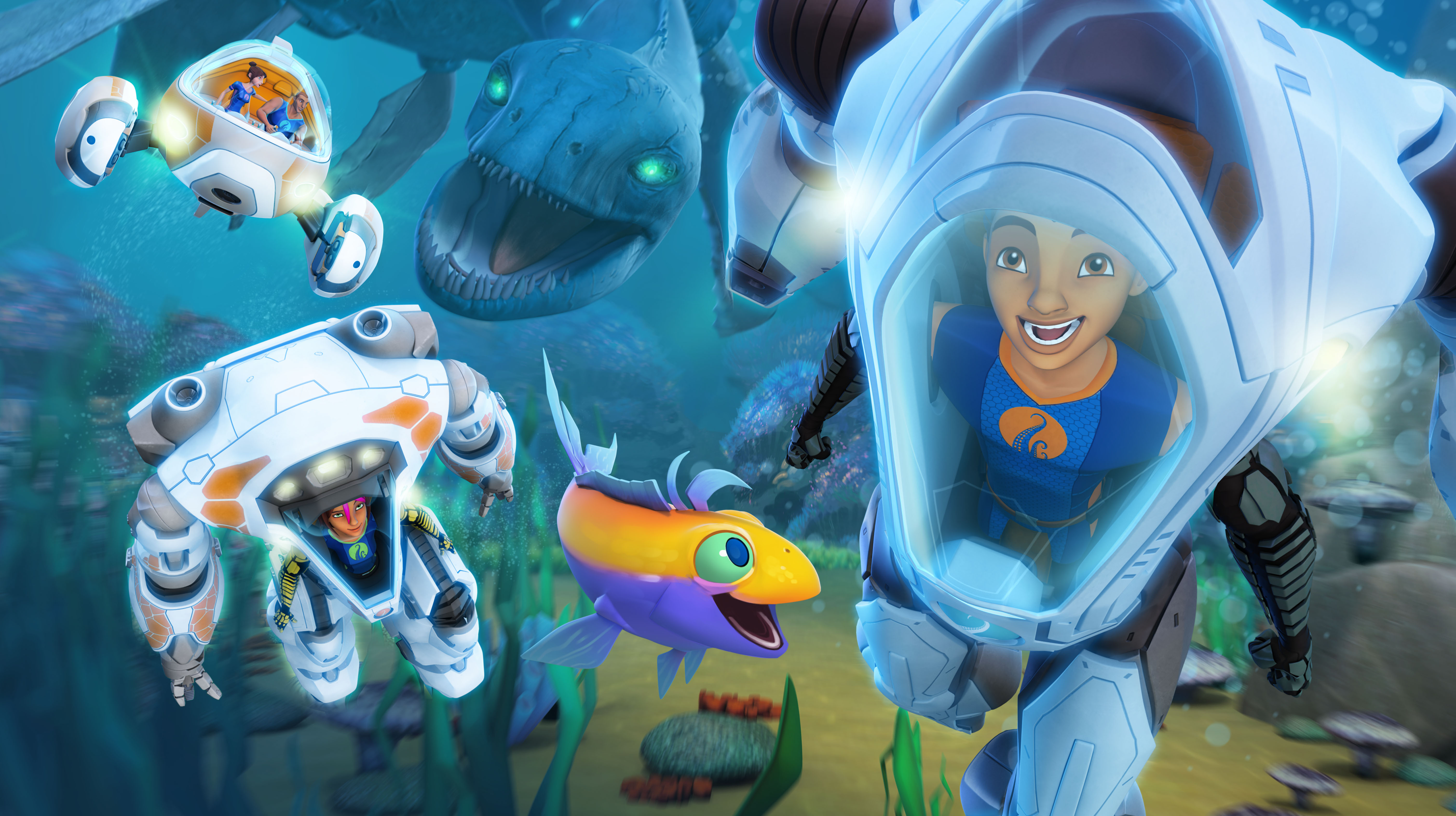 In the UK, according to BARB ratings, The Deep on CBBC was the UK’s #3 ranked children’s television series across all channels for the week ending September 7; and was the top-viewed animated series targeted to kids in the six to eleven year-old age range for the weeks ending March 20, March 27, July 17 and September 4. The Deep is currently airing on ABC ME in Australia; on Finland’s YLE; Sweden’s SVT; Norway’s NRK; Singapore’s Okto; and Portugal’s Panda; with upcoming launches on Ketnet in Belgium and Minika in Turkey.

“We are delighted that The Deep has resonated so strongly with the audiences of each of our broadcast partners since its roll out last November,” commented Alison Warner, VP, IP Sales, Acquisitions and Co-Productions at Technicolor. “The impressive performance of this imaginative adventure series and its ability to engage viewers of all ages is driving a plethora of opportunities for licensing, merchandise and retail partners and we are thrilled to have CPLG on board to strategize, facilitate and maximize the property’s potentially extensive licensing program.”

Ken Faier, SVP and General Manager, DHX Studios, added, “One of the best indicators of success in this business is commitment to a second season from broadcast platforms, so we are very happy to have major international channels on board for more of The Deep. This, together with CPLG’s considerable licensing and merchandising expertise on-hand to steer consumer products potential, means we are building strong foundations for further success.”

“We’re thrilled to be moving forward with the second season of The Deep and to have CPLG join us on this incredible journey,” added Avrill Stark, CEO of A Stark Production. “It’s clear that the series has connected with its target audiences around the world and it is testimony to the strong commitment from our global partners, who have all contributed greatly to its success. With season two, we’re looking forward to engaging children further, both on and off screen, in the amazing world of The Deep.”

“We are extremely excited to utilize our extensive experience and relationships in key markets around the world in developing compelling opportunities for The Deep,” added Steve Manners, EVP for CPLG. “We look forward to collaborating with broadcast partners in building the brand’s presence in the respective markets around the world, maximizing consumer recognition of the brand to broaden the licensee base and driving marketing opportunities across all retail platforms.”

The Deep follows the adventures of the Nekton family—a brilliant team of underwater explorers. With state-of-the-art technology and an unquenchable thirst for discovery, the Nektons explore the mysterious depths of the ocean, where most of our world lies unexplored and unexplained. While others look up to the stars, this family knows that an infinite number of things shine brightly in the darkness below. The deep is a place where leviathans swim through sunken cities, where pirates lurk amidst floating black markets, and where a mysterious group of Guardians hide long lost secrets. Taylor serves as co-creator and lead writer of the series and Brouwer serves as co-creator and art director.

Technicolor, as the underlying rights holder to The Deep, has oversight of the brand’s licensing extensions. The co-production partners are Australia-based A Stark Production (scripts, design and music) and Canada-based DHX Media (animation, voices and post-production), with distribution handled by DHX Media.

About Technicolor
Technicolor, a worldwide technology leader in the media and entertainment sector, is at the forefront of digital innovation. Our world-class research and innovation laboratories enable us to lead the market in delivering advanced video services to content creators and distributors. We also benefit from an extensive intellectual property portfolio focused on imaging technologies. Our commitment: supporting the delivery of exciting new experiences for consumers in theaters, homes and on-the-go. For more information visit: www.technicolor.com

Technicolor shares are on the NYSE Euronext Paris exchange (TCH) and traded in the USA on the OTCQX marketplace (TCLRY).

About A Stark Production Pty. Ltd (ASP).
A Stark Production (ASP) is a leader in the creative development and production of quality children’s animation and teams with global partners to deliver successful internationally co-produced shows. From its inception the company has been led by Avrill Stark, an independent and highly creative producer who has teamed with companies to produce series across a broad age range, preschool – teens. She has received many nominations and awards for outstanding animation: the prestigious UNICEF Award at Annecy, the Elan Award for Best Animated Television Production and numerous nominations for the Australian Film Industry (AFI) Awards. ASP prides itself on the development of both series and feature films with a diverse appeal both in animation and live action for children. Above all we make ‘having fun’ a priority in our pursuit of excellence!

About CPLG
CPLG (www.cplg.com) is one of the world’s leading entertainment, sport and brand licensing agencies with offices in the UK, Benelux, France, Germany, Italy, Spain, Sweden, Poland, Middle East, Greece & Turkey and the US. Owned by DHX Media (www.dhxmedia.com) a leader in the creation, production and licensing of family entertainment rights, CPLG has more than 40 years of experience in the licensing industry. It provides each of its clients with dedicated licensing and marketing industry professionals and a fully-integrated product development, legal and accounting service.  CPLG believe that partnership is about clarity, openness and trust, and is widely known for its no-nonsense, straightforward approach; Expert Common Sense.

Disclaimer
This press release contains “forward-looking statements” under applicable securities laws with respect to DHX Media including, without limitation, statements regarding launches of The Deep on Ketnet in Belgium and Minika in Turkey, the Company’s library of content, the business strategies and operational activities of the Company and specifically The Deep, including outcomes therefrom, and the markets and industries in which the Company operates. Although the Company believes that the expectations reflected in such forward-looking statements are reasonable, such statements involve risks and uncertainties and are based on information currently available to the Company. Actual results or events may differ materially from those expressed or implied by such forward-looking statements. Factors that could cause actual results or events to differ materially from current expectations, among other things, include risk factors discussed in materials filed with applicable securities regulatory authorities from time to time including matters discussed under “Risk Factors” in the Company’s most recent Annual Information Form and annual Management Discussion and Analysis, which also form part of the Company’s annual report on Form 40-F filed with the SEC. These forward-looking statements are made as of the date hereof, and the Company assumes no obligation to update or revise them to reflect new events or circumstances, except as required by law.