Rebrand as “WildBrain” Across all Business Units and New Organizational Structure Reflects Focus on Creativity, Digital Media and 360˚ Management of Brands

Halifax, NS – 23 September 2019 – DHX Media (or the “Company”) (TSX: DHX, NASDAQ: DHXM), a global kids’ and family content and brands company, today reported its fourth quarter (“Q4 2019”) and year-end results (“Fiscal 2019”) for the period ended June 30, 2019. The Company also announced that it will change its name to WildBrain and has begun rolling out a new corporate brand identity. Additionally, the Company commenced a management and business reorganization to advance its strategic priorities, and has appointed a new Chief Financial Officer (“CFO”).

Eric Ellenbogen, the Company’s newly appointed Chief Executive Officer and Vice Chair, said: “In Fiscal 2019, we advanced our priorities of creating premium content, growing our AVOD business, improving our cash flow and strengthening our balance sheet. In Q4 2019, revenue rose 12% to $108.8 million and adjusted EBITDA was up 26% to $20.2 million.

“Rebranding as WildBrain embraces our commitment to creativity, imagination and innovation, and our 360° approach to brand management. For many years, our WildBrain group has been at the leading edge of the digital media business. As that landscape continues to rapidly evolve, now is time to unify all the parts of our Company under both the name and entrepreneurial culture that WildBrain represents.”

Financial Highlights for Q4 and Fiscal 2019

(All currency figures are CAD)

Ellenbogen continued: “Aaron has a lengthy history with the Company and has made significant contributions as COO. I’m confident that with his deep knowledge of our operations and a background in business improvement, integration and synergies, Aaron will be a strong leader of our finance function. We thank Doug for his considerable contributions to the Company.”

During Q4 and the full year ended Fiscal 2019, we executed against our priorities as highlighted below: 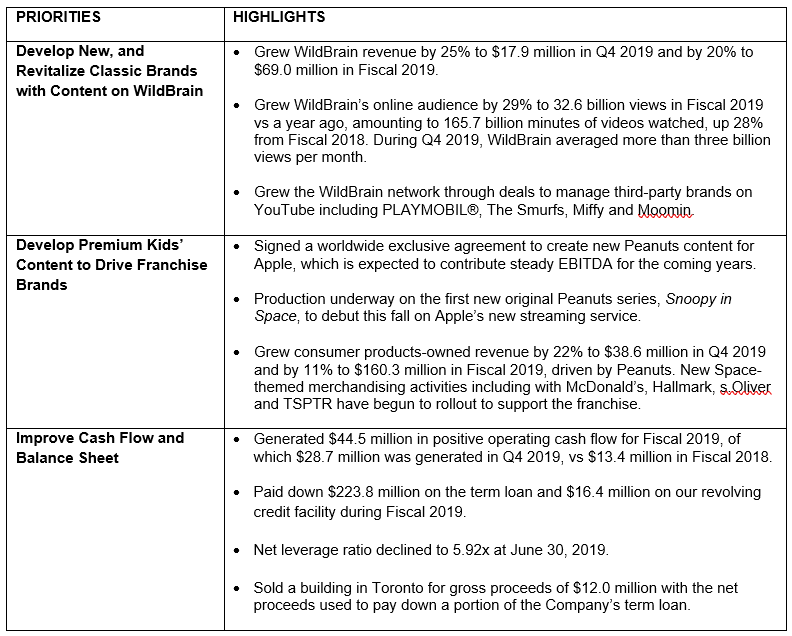 In Q4 2019, distribution revenue (excluding WildBrain) rose 46% to $16.6 million vs. $11.4 million a year ago, benefitting from a number of large library deals in the quarter including with Netflix, Youku and Virgin Media.

WildBrain continued to grow its online audience. Views rose 29% to 9.3 billion in Q4 2019 with 46.5 billion of minutes of videos watched, up 19% from the same prior year quarter. Revenue grew 25% to $17.9 million in Q4 2019 vs $14.4 million in Q4 2018, which was an improvement in growth rate from the last two quarters. We continue to pursue multiple ways to monetize our large user base amid a market environment on YouTube that continues to evolve.

Gross margin was 44% in Q4 2019 vs 43% in Q4 2018. For Fiscal 2019, gross margin was 42% vs 44% in the prior year, mainly due to growth in Peanuts revenue, lower non-WildBrain distribution revenue and an increasing share of revenue derived from WildBrain. These factors were partially offset by higher margins in the television business as we continued to control content costs and leverage our library.

Q4 2019 recorded a net loss of $62.8 million vs a net loss of $21.6 million in the same quarter last year. This loss was the result of a non-cash $68.7 million write-down, primarily related to intangible assets. The full year of Fiscal 2019 recorded a net loss of $101.5 million compared with a net loss of $14.1 million a year ago. Fiscal 2019 was primarily impacted by a $104.9 million write-down in the back-half of 2019 on certain titles related to investment in film, licensed television programs, acquired content, and intangible assets and a higher portion of net income attributable to non-controlling interests of $23.3 million.

The audio and transcript will also be archived on the Company’s website beginning approximately two days following the event.

At DHX Media, we make great content for kids and families. With over 13,000 half-hours of filmed entertainment in our library – one of the world’s most extensive – we are home to such brands as Peanuts, Teletubbies, Strawberry Shortcake, Caillou, Inspector Gadget and Degrassi. Our shows are seen in more than 150 countries on over 500 telecasters and streaming platforms. Our AVOD business – WildBrain – offers one of the largest networks of kids’ channels on YouTube, with over 109 million subscribers. We also license consumer products and location-based entertainment in every major territory for our own properties as well for our clients and content partners. Our television group owns and operates four family entertainment channels that are among the most-viewed in Canada. DHX Media is headquartered in Canada with offices worldwide and trades on the Toronto Stock Exchange (DHX) and the NASDAQ (DHXM). Visit us at www.dhxmedia.com.

This press release contains “forward-looking statements” under applicable securities laws with respect to the Company including, without limitation, statements regarding the Company’s rebranding to WildBrain and intention to change its name, timing for the Company’s annual meeting of shareholders, changes to the Company’s trading symbols on the TSX and NASDAQ, meeting the markets and industries in which the Company operates, the contribution of Peanuts content to EBITDA of the Company and debut of such content, pursuit of monetization strategies on YouTube, growth in royalties from consumer products derived from owned intellectual property, management and business reorganization of the Company, expected charges and annual cost savings associated with such reorganization, the transition of the CFO position, the business strategies and operational activities of the Company, and the future growth and financial and operating performance of the Company. Although the Company believes that the expectations reflected in such forward-looking statements are reasonable, such statements involve risks and uncertainties and are based on information currently available to the Company. Actual results or events may differ materially from those expressed or implied by such forward-looking statements. Factors that could cause actual results or events to differ materially from current expectations, among other things, include the ability of the Company to execute on its business strategies, the ability of the Company to realize expected operating and cost savings, consumer preferences, market factors, the ability of the Company to execute on production and licensing arrangements, and risk factors discussed in materials filed with applicable securities regulatory authorities from time to time including matters discussed under “Risk Factors” in the Company’s most recent Annual Information Form and annual Management Discussion and Analysis, which also form part of the Company’s annual report on Form 40-F filed with the U.S. Securities and Exchange Commission. These forward-looking statements are made as of the date hereof, and the Company assumes no obligation to update or revise them to reflect new events or circumstances, except as required by law.