“We’re pleased to continue to deliver on our strategic priorities in Q3 2017. We continued to be a ‘one-stop’ supplier of kids’ content for leading streaming and broadcast customers seeking original productions as well as library titles, as evidenced by broadcast deals around the globe, including Netflix, for the new series, Fangbone!,” said Dana Landry, CEO of DHX Media.  “Our ability, through WildBrain, to build online audiences for both our proprietary and third-party brands continued to deliver immediate and exceptional returns.  With the new Mega Man series in development, we further advanced our strategy to reboot classic kids’ brands that have potential to realize revenue through multiple streams.”

Mr. Landry added, “DHX Media has been built to drive global growth in children’s brands through production, distribution and consumer products. Today’s exciting announcement to acquire Peanuts and Strawberry Shortcake not only plays perfectly to these strengths, but gives us meaningful scale in consumer products to accelerate the growth of our business in both the near- and longer term.”

Dividend Declaration
Today, the Company declared a dividend for the quarter of $0.019 on each common voting share and variable voting share outstanding to the shareholders of record at the close of business on May 26, 2017 to be paid on June 20, 2017.

Outlook
Management is pleased to provide an update to its Outlook for Fiscal 2017, and reaffirm its overall annual revenue targets.  Details of management’s expectations for revenues, gross margins and operating expenses for Fiscal 2017 can be found in the Outlook section of the Company’s Q3 2017 MD&A, available at www.dhxmedia.com, on www.sedar.com or http://www.sec.gov/edgar.

DHX Media management will hold a live webcast and presentation with slides for analysts and investors on May 10, 2017 at 8:00 a.m. ET, at the following address: http://edge.media-server.com/m/p/acr4iphd 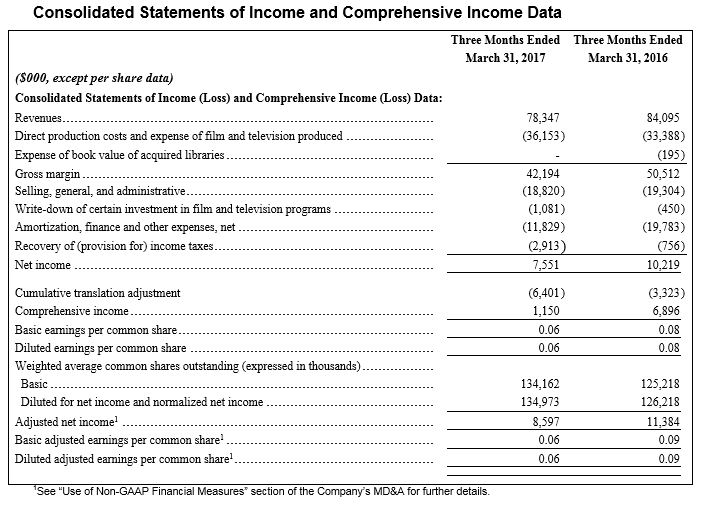 Revenues
Revenues for Q3 2017 were $78.35 million, down 7% from $84.10 million for Q3 2016 but slightly ahead of expectations. In absolute dollars, the decrease in Q3 2017 was due largely to expected declines, in line with quarterly targets, in DHX Television, consumer products-represented revenues, consumer-products owned, proprietary production and producer and service fees, offset by increases in distribution. Comparatively, Q3 2017 and Q3 2016 include the same assets in terms of prior acquisitions; accordingly, all revenue fluctuations in comparing Q3 2017 to Q3 2016 are organic. A detailed review of each source of revenue is included below.

Distribution and WildBrain revenues: Management is pleased to report strong total distribution revenues of $26.45 million, up 11% from $23.93 million for Q3 2016, driven by very strong growth in WildBrain. At $18.04 million for Q3 2017, distribution revenues excluding WildBrain were down 10% from $19.96 million for Q3 2016, but above the high-end of Management’s previously reported quarterly expectations, as the Company experienced consistent demand for content from competing SVOD and other players. For Q3 2017, amongst other key distribution deals for both linear and digital platforms, the Company closed significant deals with AB Svensk Filmindustri, iQiyi, Netflix, Stan Entertainment, SpiritClips LLC, Viacom, Virgin Media Ltd. Management is very pleased to report that revenues from WildBrain were $8.41 million for Q3 2017, reflecting 112% growth versus Q3 2016 revenues of $3.97 million, and well above the mid-point of Management’s previously reported quarterly expectations.

Producer and service fee revenues: For Q3 2017, the Company earned $16.64 million of producer and service fee revenues, an increase of 18% versus the $14.05 million from Q3 2016, and above the high-end of Management’s previously reported quarterly expectations as progress on a number of key service projects began to accelerate as Management green lit more aggressively the Mattel partnership properties. This trade off resulted in higher quarterly revenues but at a different gross margin mix. See Gross Margin analysis below.

Television revenues: For Q3 2017, DHX Television revenues were down 13% to $13.64 million from $15.73 million from Q3 2016, and were below the low-end of Management’s quarterly expectations as promotion and advertising revenues were off to a slower start than anticipated in the quarter. The decline in the subscriber revenues was expected and has been driven by the negotiated lower rates resulting from the Company’s strategic decision to focus the majority of the TV slate on our own proprietary content. The lower than expected promotion and advertising revenue is expected to reverse throughout Q4 2017 and Fiscal 2018 as the Company has stepped up its efforts in this regard after recently getting approval from the CRTC to allow broadcast advertising for the Family Channel. Approximately 95% or $13.01 million of the television revenues were subscriber revenues, while advertising, promotion, and digital revenues accounted for a combined 5% or $0.62 million of the total television revenues.

Gross margin for Q3 2017 was $42.19 million, a decrease in absolute dollars of $8.32 million or 16% compared to $50.51 million for Q3 2016. The overall gross margin for Q3 2017 at 54% of revenue was within Management’s previously reported quarterly expectations, albeit towards the low-end of the expected range. At 61%, proprietary content margins were near the high-end of Management’s expectations and higher than previous quarters, driven by strong total distribution revenues and the absence of live tour revenues, which carry lower gross margins. As noted above, producer and service revenues for Q3 2017 were higher than anticipated as Management shifted some capacity towards the Mattel partnership properties. This resulted in a gross margin shift due to the production mix. As a result, at 15%, gross margins for producer and service fees were below the low-end of Management’s expectations. Producer and service fee revenues included $4.17 million in revenues related to the production of Bob the Builder and Little People pursuant to the Company’s strategic pact with Mattel. In addition to earning producer and service revenues and gross margins, these shows carry with them significant distribution and consumer products rights, which the Company expects to monetize for multiple years forward. Gross margins for DHX Television, at 61%, were well within Management’s expectations, impacted by both lower external content costs and lower revenues when compared to Q3 2016. Gross margin for Q3 2017, including DHX Television, was calculated as revenues of $78.35 million, less direct production costs and expense of investment in film & television programs of $36.15 million and $nil expense of book value of acquired libraries, (Q3 2016-$84.10 million less $33.39 million and less $0.20 million, respectively).

Adjusted EBITDA
For Q3 2017, Adjusted EBITDA was $24.85 million, down $7.88 million or 24% over $32.74 million for Q3 2016. Please see the “Use of Non-GAAP Financial Measures” and “Reconciliation of Historical Results to Adjusted EBITDA” sections of this MD&A for the definition and detailed calculation of Adjusted EBITDA.

Disclaimer
This press release contains “forward looking statements” under applicable securities laws with respect to DHX Media including, but not limited to, statements regarding the effect of the adoption of the amendment to IAS 38 on gross margins and Adjusted EBITDA of the Company, the acquisitions of Peanuts and Strawberry Shortcake and the expected financial and other impacts associated with such acquisitions, the timing of production schedules and deliveries, expectations regarding the growth and financial performance of WildBrain, expected benefits associated with the Company’s agreement with Mattel, the performance and growth of the Teletubbies brand, expectations regarding promotion and advertising revenues derived from DHX Media’s television channels, the markets and industries in which the Company operates, including demand for and consumption of kids’ content, the business strategies and operational activities of DHX Media and its subsidiaries, and the growth and financial and operating performance of DHX Media, its subsidiaries, and investments. Although the Company believes that the expectations reflected in such forward looking statements are reasonable, such statements involve risks and uncertainties and are based on information currently available to the Company. Actual results or events may differ materially from those expressed or implied by such forward looking statements. Factors that could cause actual results or events to differ materially from current expectations, among other things, include delivery and scheduling risk associated with production revenues, the Company’s ability to execute and close anticipated licensing transactions, the Company’s ability to close and effectively integrate the Peanuts and Strawberry Shortcake acquisitions, and the risk factors discussed in materials filed with applicable securities regulatory authorities from time to time including matters discussed under “Risk Factors” in the Company’s Annual Information Form and annual Management Discussion and Analysis, which also form part of the Company’s annual report on Form 40-F filed with the United States Securities and Exchange Commission. These forward-looking statements are made as of the date hereof, and the Company assumes no obligation to update or revise them to reflect new events or circumstances, except as required by law.