London UK – 5 February 2020 – WildBrain CPLG, one of the world’s leading entertainment, sport and brand licensing agencies, has brokered a deal with creator and influencer Alessandro Enriquez to launch  designer capsule collections with some of the biggest names in Italian fashion to celebrate LINE FRIENDS, one of the fastest growing global character brands. Featuring signature characters BROWN, CHOCO, CONY and SALLY, LINE FRIENDS was originally created as stickers for the leading mobile messenger app LINE and its 200 million active users worldwide. 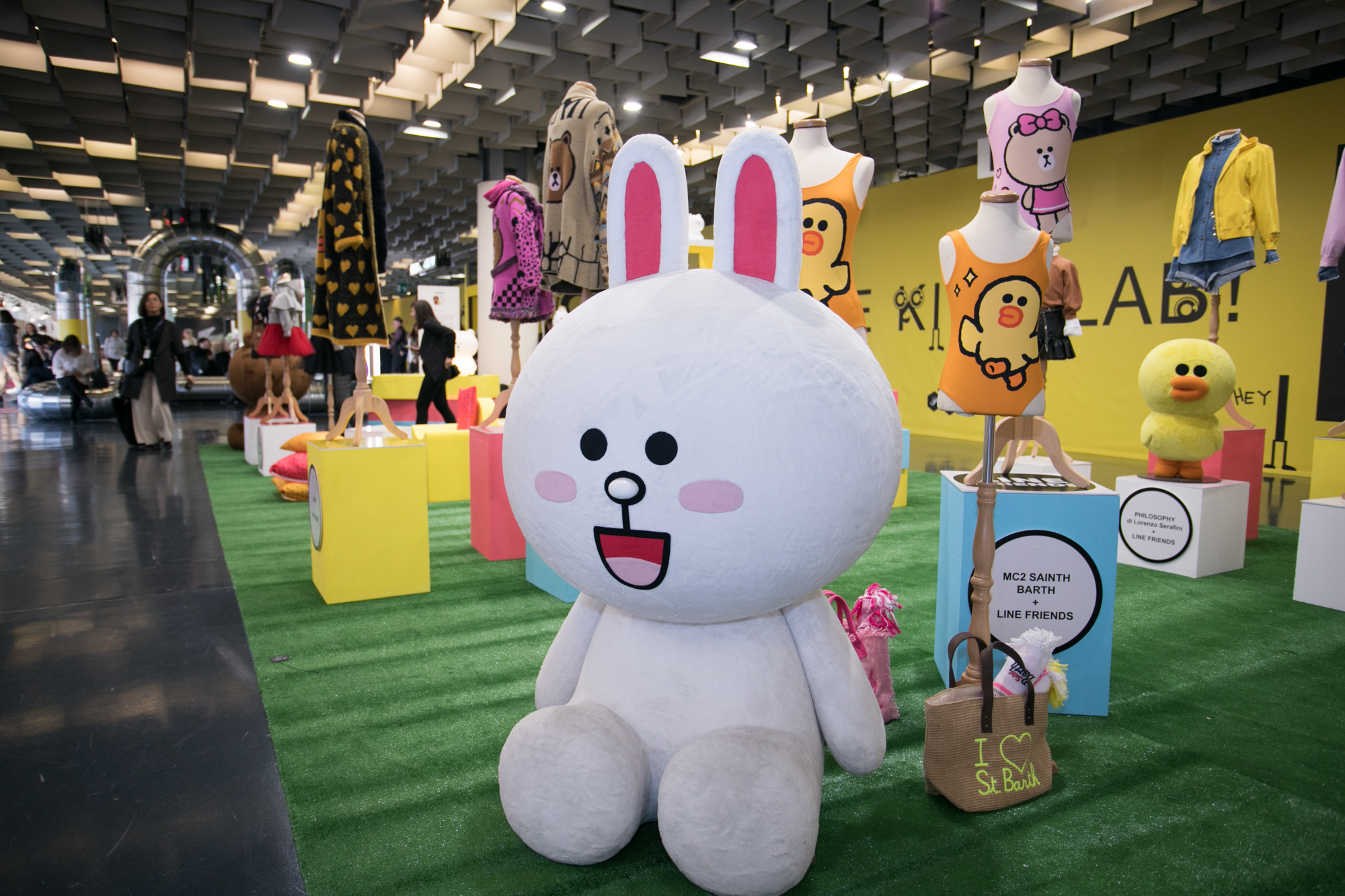 Monnalisa has unveiled its range of velvet printed patch sweatshirts and a dress with tulle application on the shoulders; MC2 Saint Barth launched a collection of swimsuits for adults and kids featuring CHOCO and SALLY; Diadora debuted all-over print sweatshirts; while Pinko Up has designed a range of sweatshirts in black and pink. In addition, the Philosophy di Lorenzo Serafini Kids capsule collection celebrated LINE FRIENDS with a cotton sweater and sweatshirt featuring BROWN, SALLY and CHOCO prints, while 2Star’s LINE FRIENDS styles for boys and girls featured sneakers with BROWN and CONY embroidered on the side and printed on the insoles and Akep has created four jacquard cardigans with the faces of BROWN, CHOCO, CONY and SALLY on the reverse.

Alessandro Enriquez said: “The Fashion Comics Project created with LINE FRIENDS, in collaboration with Pitti Bimbo, has been hugely successful due to the quality and mix of products, the calibre of the brands involved and the impressive feedback from media. It was fantastic to see BROWN, SALLY, CHOCO and CONY be such a hit with visitors of all ages at Pitti Bimbo, and I’m confident the popularity of these characters will continue to grow in our country as they have done in the rest of the world.”

Maria Gurrieri, Managing Director at WildBrain CPLG Southern Europe, said: “It has been an incredible creative process combining the distinctive visual style of LINE FRIENDS with the visionary Alessandro Enriquez and innovation of our Italian designers. The fantastic response to the capsule collections at Pitti Bimbo shows how exciting this new Fashion Comics collaboration is and we’re sure it will be a huge hit with consumers across Italy.”

LINE FRIENDS is a global character brand which originally started from BROWN & FRIENDS, created for use as stickers for the leading mobile messenger app LINE and its 200 million active users worldwide. Taking a step further, the company has emerged as a global creative studio by offering diversified content based on its wide array of Intellectual Property(IP)s including ‘BT21’, ‘Animation Running Man’, ‘ROY6’ and ‘Usamaru’. LINE FRIENDS also has collaborated with a number of renowned brands including Bang&Olufsen, Leica, Lepetto, Converse, LAMY and Brompton, all aligned with the company’s philosophy and value to showcase premium character products. LINE FRIENDS has operated more than 190 stores in a total of 14 markets in trend-leading cities such as New York, LA, Tokyo, Seoul and Shanghai. Since it became an independent company in January 2015, LINE FRIENDS continues to win the hearts of millennials worldwide through interactive digital communication and differentiated brand experience across multiple retail touchpoints. For more information, please visit www.LINEFRIENDS.com.

Alessandro Enriquez has a varied cultural heritage: his mother is from Sicily while his father has French-Tunisian origin and descends from a Spanish family. Since his Bachelor of Arts in 2004 at the University of Palermo, he starts his “wanderings” – first living in Barcelona then in Palma de Mallorca and finally in London. Here he studies fashion design in one of the most prestigious institutes of Europe, Central St Martins in London, he continues his studies at the Istituto Marangoni in Milano, where he lives today. Following his studies, he begins his career as a designer, which brings him to work at the Italian fashion house Costume National Maison.

In 2009 Alessandro started teaching at the Istituto Marangoni and then at IED (Istituto Europeo di Design), where he still teaches. A restless and versatile soul, he does not limit himself to working only on one project, but he follows his greatest ability: “communication”. One of his passions is writing about art and fashion. He has collaborated with several influential magazines such as Vogue Kids, Vogue Wedding, grazia.it, elle.it and Marie Claire. He is considered by the international press as the “young Italian ambassador of fashion”.

WildBrain CPLG is one of the world’s leading entertainment, sport and brand licensing agencies, with offices in the UK, Benelux, Nordics, France, Germany, Italy, Spain, Sweden, Poland, Greece & Turkey, Russia, the Middle East, and the US. With more than 40 years of experience in the licensing industry, WildBrain CPLG provides each of its clients with dedicated licensing and marketing industry professionals and a fully integrated product development, legal and accounting service. WildBrain CPLG believe that collaboration is about clarity, openness and trust, and is widely known for its no-nonsense, straightforward approach – Expert Common Sense. Please contact us or visit the WildBrain CPLG website for more information: www.cplg.com.