FAMILY CHANNEL’S STAND UP! CAMPAIGN RETURNS AHEAD OF ITS 14TH ANNUAL BULLYING AWARENESS WEEK KIDS CAN VISIT FAMILY.CA TO WIN ONE OF FOUR STAND UP! RALLIES AT THEIR SCHOOL

Toronto, ON – 7 September 2016 – Family Channel is starting a conversation about bullying with the launch of its 14th annual Bullying Awareness Week campaign, encouraging students to stand up, not stand by when they see bullying happen. Family is showcasing the commitment of its network stars to spread the message with actors from Backstage, The Next Step and F2N’s Degrassi: Next Class contributing to new innovative content and an original anthem. In addition, kids can win the chance for Family Channel stars to visit their school for a special Stand UP! rally event by entering the contest at Family.ca. During Bullying Awareness Week, Monday, November 14 – Sunday, November 20, viewers can tune in for exclusive programming addressing the issue. 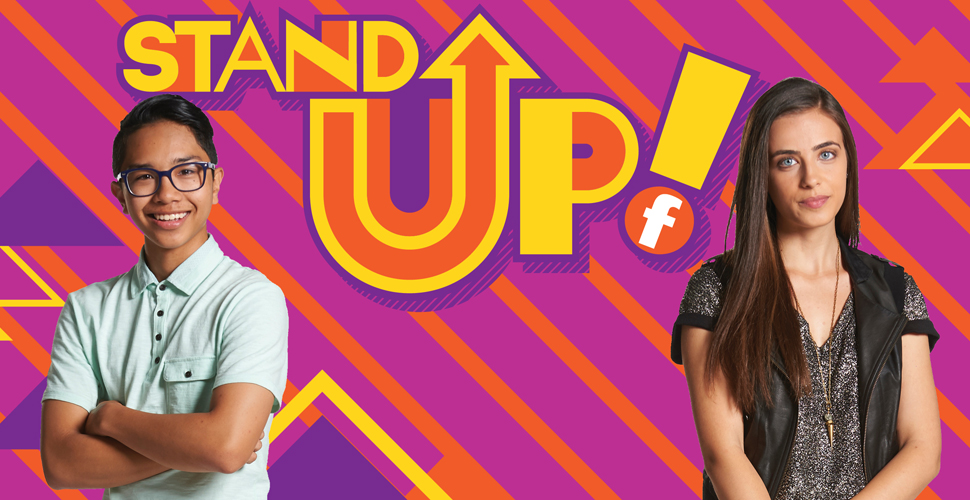 “Raising awareness about bullying behaviour and creating content and resources that aid in bullying prevention has always been a top priority for Family Channel,” said Joe Tedesco, Senior Vice President and General Manager, DHX Television. “From working with our research partners, we know that bullying affects nearly everyone in some way or another and it’s incredibly inspiring to see how important this issue remains with our Family Channel stars who are willing to open up and share their own personal stories with our audience and eager to participate in the campaign from year-to-year.”

With the success of bullying-themed episodes from Family’s popular series, including a new episode from The Next Step airing this fall, Family has enhanced its original content offering through a new partnership with TELUS via their innovative program to keep Canadians safer online – TELUS WISE (Wise Internet & Smartphone Education). TELUS WISE and Family created exclusive short-form content from the tween series Backstage and teen drama Degrassi: Next Class that addresses bullying prevention. The creative scenarios see fan-favourite characters exploring issues such as cyberbullying, protecting your privacy online, and identity theft, with Degrassi: Next Class also tackling issues more relevant to teens like sexting and romantic relationships. These exclusive shorts will air on Family throughout Bullying Awareness Week, alongside special messages from Family Channel stars, and footage from the rally tour.

“Through TELUS WISE we’re committed to providing youth with effective strategies and resources to help them tackle critical challenges like cyberbullying and identity theft as well as helping them positively manage their online reputation,” said Blair Miller, Vice President Content at TELUS. “We know that young people are ready and willing to take a stand when it comes to cyberbullying, but are looking for support on how to safely intervene. Partnering with the team at DHX Television enables us to reach our shared objective of helping youth navigate these potential experiences through engaging stories featuring their favourite characters.”

Student involvement is an essential component of the Stand UP! campaign, and Canadian schools have the chance to win the Stand UP! Rally Contest to join the conversation. Kids can enter to win one of four rallies by visiting Family.ca and explaining how their school stands up to bullying. This year, Backstage stars Julia Tomasone (Bianca) and Colin Petierre (Sasha) are thrilled to be hosting the interactive rallies, which will include an exclusive screening of a never-before-seen bullying-themed episode of The Next Step, a discussion about the episode led by a PREVNet representative, and a visit from a TELUS WISE ambassador who will discuss cyberbullying and internet safety.

Beginning today, Family fans can also listen to the new original anthem, titled “We Stand Up.” Performed by Backstage stars Josh Bogert, Mckenzie Small, Aviva Mongillo and Kyal Legend, the upbeat pop track encourages listeners to stand up and sing together, recognizing that there is strength in unity and diversity. The song talks about the importance of loving and accepting one’s self and knowing that even when times are tough, things will get better. “We Stand Up” is available for streaming exclusively on Family.ca.

Those interested in learning more about Family Channel’s 14th annual Bullying Awareness Week campaign can visit Family.ca/StandUp. In addition to the original song and contest details, the comprehensive webpage offers downloadable resources including tip sheets and activities for students, parents and teachers prepared by PREVNet.
Family Channel co-founded Bullying Awareness Week in 2003 and developed the Stand UP! campaign in association with PREVNet (Promoting Relationships and Eliminating Violence Network), a national network of Canadian researchers, community organizations and governments committed to ending bullying and promoting positive relationships.

Family Channel offers the best in family television entertainment in a premium, commercial-free environment. Dedicated to celebrating family life and providing a daily vacation for children and their families, Family airs a unique mix of top-rated Canadian and acquired series, movies and specials. Family is also home to F2N – an entertainment haven for teens that features high quality programs after 9 p.m. Family Channel subscribers have access to the Family Channel App, Family
OnDemand and Family Online at no additional cost, to see hit movies and series when they want them, where they want them. Visit us at Family.ca.