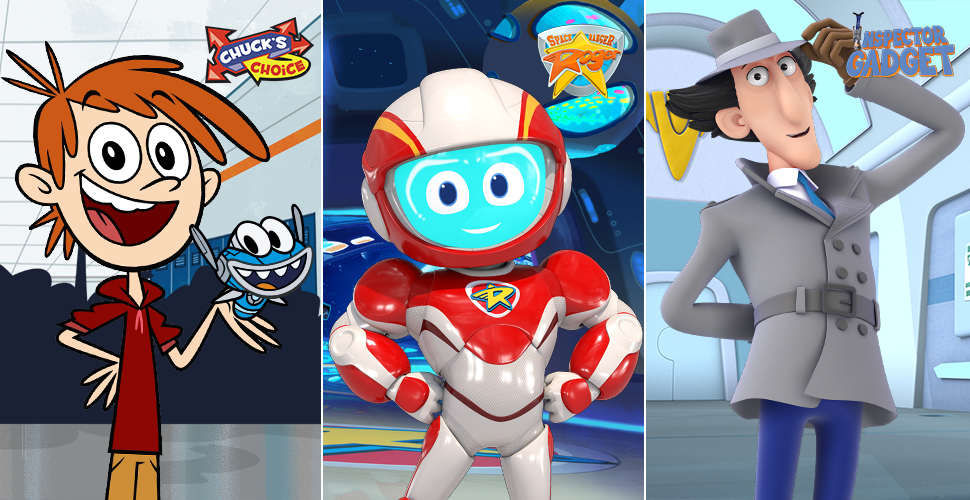 Halifax, NS – 30 March 2016 – DHX Media (“DHX” or the “Company”) (NASDAQ: DHXM; TSX: DHX.A, DHX.B), a global leader in kids and family entertainment content, is heading to this year’s MIPTV, the world’s biggest TV and digital content market, with new commissions for three series: Chuck’s Choice has been commissioned by YTV in Canada, and has already been licensed to Turner Broadcasting France; Space Ranger Roger is commissioned by Family Jr.; and season two of Inspector Gadget has been commissioned by TELETOON, in Canada. All three series are being produced at DHX Studios.

Josh Scherba, SVP Distribution at DHX Media, said: “We have a very strong slate for MIPTV with these new commissions underscoring our reputation for producing standout original content for kids and families. Driven by notable creative talents, with Kervin Faria creating and Rob Boutilier directing Chuck’s Choice, and Jeff Rosen behind Space Ranger Roger, our newest two shows have fantastic pedigrees. Along with the iconic Inspector Gadget, now going into a second season after significant global demand, we are looking forward to debuting these shows to the international market at MIPTV.”

For Chuck McFarlane, life is all about making choices. But lucky for him, these aren’t just regular everyday choices! Through an intergalactic gift from the stars, Chuck is bestowed with what may be the greatest device in the universe…the U-Decide 3000, giving him the power to literally choose his next adventure!  Some choices turn out great, others, not so much. After all, being given the power of flight sounds amazing. But what if it came with a larva sac attached to your abdomen? Suddenly everyone’s looking at you like you’re a bit strange. Of course Chuck’s life choices are a bit more mind-blowingly awesome, since he is…the DECIDER! While most kids have very limited choices, this 10-year-old gets to control his destiny and go on one thrilling adventure after another without any boring ol’ adults telling him what to do, and with his best friends coming along for the ride!

Space Ranger Roger is a plucky little alien hero sent to help a strange, faraway world…Earth! No assignment is too big or too small. Roger’s motto is, “A friend in need is a mission for me!” Along with his trusty squad of Ranger bots, and his bot dog, Rover, Roger can always get the job done.

Each day, Roger scans the surface of our small blue planet from orbit aboard the Friend Ship. When he picks up a distress signal from an Earth creature, it’s his job as a Space Ranger to gear up with his team of rambunctious fix-it bots, find out what the problem is and save the day in a fun and creative way.

The new Inspector Gadget is back – again! The stakes are higher than ever in season two for Inspector Gadget, his niece Penny and their trusty dog, Brain. Will they be able to defeat Dr. Claw and his nephew Talon? Or will the MAD villains finally be victorious? Both sides are more determined than ever to come out on top…even if Inspector Gadget still hasn’t got a clue.

About DHX Media Ltd.
DHX Media Ltd. (www.dhxmedia.com) is a key player internationally in the production, distribution, broadcast and licensing of entertainment content for children and families. Owner of the world’s largest independent library of kids’ and family content, at more than 11,500 half-hours, DHX Media is recognized globally for such brands as Teletubbies, Yo Gabba Gabba!, Caillou, In the Night Garden, Inspector Gadget, Make It Pop, Slugterra and the multiple award-winning Degrassi franchise. DHX Media is comprised of four main business units: DHX Studios creates high-quality original entertainment at its Vancouver and Halifax animation studios, its Toronto live-action studio, and in working with top international producers; DHX Distribution is a major provider of content to the global market; DHX Television, home to the Family suite of channels, is dedicated to delivering best-in-class programming to Canadian families; and DHX Brands specializes in creating, building and managing high-profile global entertainment brands within the children’s and young-adult markets. DHX Media also owns the full-service international licensing agency, Copyright Promotions Licensing Group Ltd. (CPLG), which represents numerous entertainment, sport and design brands. DHX Media has offices in 15 cities worldwide, including Toronto, Vancouver, Halifax, Los Angeles, London, Paris, Barcelona, Milan, Munich, Amsterdam and Beijing. The Company is listed on the NASDAQ Global Select Market under the ticker symbol DHXM, and on the Toronto Stock Exchange under the ticker symbols DHX.A and DHX.B.