London, UK & Philadelphia, PA – 27 September 2018 – Just Play, a leading toy manufacturer, has appointed digital kids’ network & studio, WildBrain, to create new original content and exclusively manage the global YouTube channel to support the launch of Just Play’s new doll brand, Hairdorables. Under the agreement, WildBrain will help build and grow the international audience for Hairdorables through the launch of the brand’s official YouTube channel and through production and distribution of original animated and live-action content. Hairdorables’ first-ever YouTube series, designed to inspire young fans and celebrate the collectible dolls, is now live on the Hairdorables channel on WildBrain’s network and the YouTube Kids’ App. 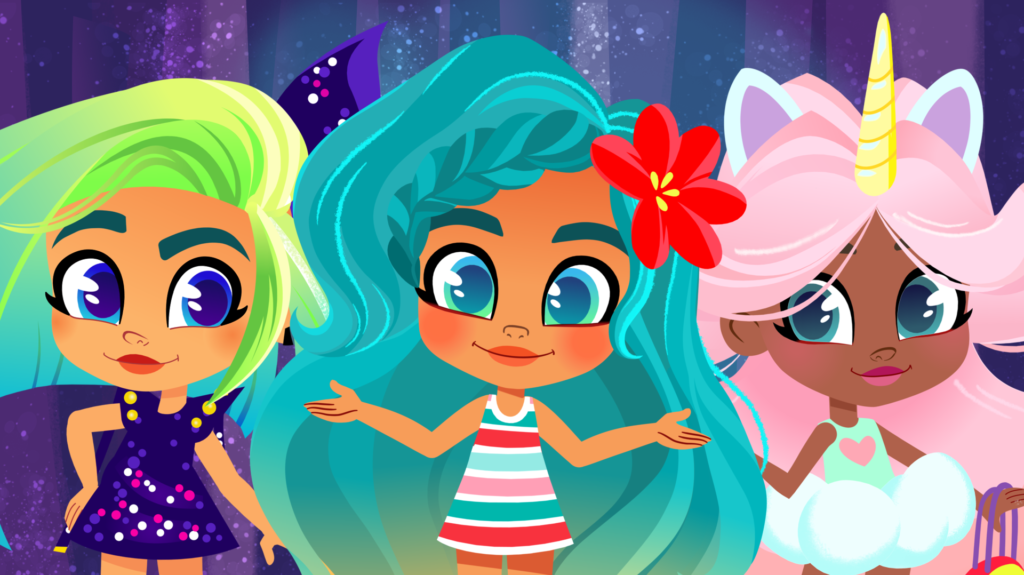 “We’re thrilled to team up with WildBrain to leverage their expertise in growing viewership and identifying content trends on YouTube,” said Geoffrey Greenberg, co-President, Just Play. “The platform is an integral part of the brand – the twelve Hairdorables characters are all YouTubers themselves who create unique content about their interests, from hairstyling to fashion to cooking. The brand celebrates today’s creator community, so there is no better platform on which to introduce our characters. We are having a lot of fun developing the stories of this creative, supportive, fun-loving group of friends who find joy and inspiration in the world around them.”

“The Hairdorables embody many of the popular trends seen on YouTube today, and we’re excited to participate in the global launch of this wonderful new toy brand, bringing the fun ensemble of characters to life with the creation of original content,” said Jon Gisby, Managing Director, WildBrain. “Through the WildBrain network and YouTube Kids’ App, young fans around the world can engage with and be inspired by content whenever and wherever they want. With WildBrain’s unrivalled experience in producing and managing kids’ content for YouTube, we’re confident the big-haired Hairdorables are headed for big success.”

There’s no such thing as a bad hair day for Noah and the Hairdorables, the popular doll line from Just Play, created for girls aged 5-8. This stylish girl squad with “Big Hair, Don’t Care” attitudes, is ready to take the internet by storm with an all-new collection of animated and live-action shorts. The English-language video series, produced by WildBrain, consists of animated vlogs to introduce each character, live-action toy play videos and an animated series about the characters’ lives and adventures. The YouTube channel aims to engage girls with the brand and inspire fans to create their own Hairdorables videos with the toys.

Hairdorables arrived at major US retailers in early August, supported by a multi-platform media campaign, including National TV, Social Media, Influencer unboxings, and an unveiling event. They have seen robust sales above expectations from the start and have earned coveted spots on retailer and industry lists of top holiday toys. The products are launching internationally throughout fall of 2018 and into spring 2019.

About WildBrain
WildBrain is an industry leader in the management and creation of preschool and children’s entertainment content on platforms such as YouTube, Amazon Video Direct and others. WildBrain’s branded YouTube network is one of the largest of its kind, featuring more than 110,000 videos for over 600 kids’ brands in up to 22 languages. The WildBrain network, which has over 50 million subscribers, generated over 129 billion minutes of watch time across 25 billion views, from July 2017 through June 2018. Connecting kids’ content owners with advertisers in the Advertising Video-on-Demand (AVOD) space, the WildBrain network features popular third-party brands such as Fireman Sam, Curious George, Shopkins and Ben 10, as well as much of DHX Media’s world-renowned library of 13,000 half-hours of kids’ and family content, including Peanuts, Teletubbies, Strawberry Shortcake, Caillou, Inspector Gadget, Degrassi, Yo Gabba Gabba! and many others. WildBrain Studios also specializes in the creation of new, original content for its network, such as animated and live-action shorts; toy-play and stop-motion videos; preschool counting and alphabet videos; nursery rhymes and more. WildBrain is a wholly owned subsidiary of DHX Media (TSX: DHX; NASDAQ: DHXM).

About Just Play, LLC
Just Play is a passionate toy company that has emerged as a global leader across a broad range of children’s consumer goods including figures, playsets, dolls, plush, role-play and dress-up.  They create award-winning products based on some of today’s most popular children’s entertainment brands in partnership with best-in-class licensing partners.  Just Play was founded by two toy industry veterans in 2010 and since then has become the #6 toy company in North America, according to NPD.  To learn more about Just Play’s products, please visit www.justplayproducts.com or follow the company on Twitter (@JustPlayToys) or on Facebook (www.facebook.com/JustPlay).

About DHX Media Ltd.
DHX Media Ltd. (TSX: DHX, NASDAQ: DHXM) is a global children’s content and brands company, recognized for such high-profile properties as Peanuts, Teletubbies, Strawberry Shortcake, Caillou, Inspector Gadget, and the acclaimed Degrassi franchise. One of the world’s foremost producers of children’s shows, DHX Media owns the world’s largest independent library of children’s content, at 13,000 half-hours. It licenses its content to broadcasters and streaming services worldwide and generates royalties through its global consumer products program. Through its subsidiary, WildBrain, DHX Media operates one of the largest networks of children’s channels on YouTube. Headquartered in Canada, DHX Media has offices worldwide. www.dhxmedia.com