Revenue up 83% overall, including 16% organic growth

$5.8 million in Peanuts’ synergies and company-wide cost reductions expected to be realized in F2018

“We’re off to a good start for Fiscal 2018, with 83% revenue growth, and we are on plan to achieve our annual growth targets,” said Dana Landry, CEO of DHX Media. “We are encouraged by the organic revenue growth in our core production and distribution businesses, and the fact that the newly acquired Peanuts and Strawberry Shortcake assets significantly expand our consumer products portfolio. With this acquisition, we are now positioned to meet the unprecedented global demand for kids’ and family content.”

Mr. Landry continued, “We’re on track to achieve our target of $11 million in annualized Peanuts’ synergies and company-wide cost reductions. $5.8 million is expected to be realized in Fiscal 2018.  We’re focused on cash generation and delivering incremental returns on the investments we’ve made over the past few years in new content.  We will use this cash flow primarily to de-lever and to deliver on organic growth opportunities as they arise.”

First Quarter Results Point to a Positive Start for Fiscal 2018

Q1 2018 revenue of $98.6 million included 16% organic growth, and 67% acquisitive growth, primarily from Peanuts and Strawberry Shortcake, over the same three-month period last year.  During the quarter, our production and distribution businesses grew 51% to $43.3 million, as we realized on a healthy pipeline for our kids’ content.  With the acquisition, we have significantly grown the scale of our licensing business, including our in-house agency, CPLG, to 42% of total revenue.  We will leverage this scale to continue to grow consumer products across a broader portfolio of our own brands to drive cash generation.

Gross margin of 44% reflected the new mix of our business as well as higher third-party revenues from distribution and WildBrain, and continued advancement of the Mattel partnership projects during the first quarter of 2018.

Adjusted EBITDA1 of $22.8 million is tracking on plan with net income of $8.1 million.

Both the Peanuts integration and cost-reduction program continue to progress on plan.  We are on track to realize our target of $11 million in total annualized acquisition-related synergies and cost reductions by the end of Fiscal 2019, of which $5.8 million is expected to be recognized in Fiscal 2018.

As part of Peanuts-related cost synergies, we have centralized our U.S. brands operations, are rationalizing personnel and duplicate functions, and have initiated the first three agency conversions. Incremental to these synergies, we have implemented cost reduction initiatives towards growing EBITDA. Cost-saving measures included licensing the non-core interactive games division to a third-party, which has assumed its full operations and related expenditures.

Content continues to be core to our business as we deliver on our strategic priorities of: (i) expanding our content library; (ii) distributing our shows globally; and (iii) developing global brands with strong consumer product potential.

Content Creation – Total production revenue in Q1 2018 rose by 45% to $20.2 million, comprised of 11 new proprietary half-hours that contributed $2.5 million in revenue, while service projects accounted for $17.6 million in revenue.  Service work continued to be robust, which generates more predictable cash flows and also includes production on four properties pursuant to our strategic pact with Mattel, in which we participate across multiple revenue streams.

At quarter-end, $37.1 million was invested in new episodes in progress with the majority of these productions expected to be delivered in Fiscal 2018 and into early Fiscal 2019, which will feed future growth opportunities in distribution and consumer products.

Content Distribution – Our original and library titles continue to be in demand across a broad range of linear and streaming platforms worldwide. This was evidenced by traditional distribution revenue rising by 40% to $12.3 million in the 2018 first quarter compared with a year ago, and 18% on an organic basis.

Our WildBrain network on YouTube continued to expand at a vigorous pace.  WildBrain revenue of $10.9 million reflected 79% organic growth, as well as contribution from Kiddyzuza and Ellie Sparkles, two independent YouTube channels that were acquired recently towards accelerating the growth and size of our ad-based video-on-demand network.

Content-Driven Consumer Products – As a top-five pre-school property in the U.K., Teletubbies continues to drive steady toy sales while extending into new products and categories including publishing and live events, as well as expanding internationally into Germany, China, the Middle East and the Scandinavian region.  In addition, we are building global brand awareness for Teletubbies through YouTube, where the brand has grown to be one of WildBrain’s top-five revenue generating properties, now attracting 100 million monthly views across 237 territories.

Subsequent to quarter-end, the U.K., France and the Middle East marked the first three territories to be transferred to CPLG from third-party agencies as we realize on targeted synergies from the Peanuts acquisition.  We will leverage CPLG, our in-house, full-service licensing group, to grow this timeless brand in under-exploited territories.

Today, the Company declared a dividend for the quarter of $0.02 on each common voting share and variable voting share outstanding to the shareholders of record at the close of business on November 28, 2017 to be paid on December 18, 2017.

Management has reaffirmed its outlook metrics for Fiscal 2018, including cash flow and adjusted EBITDA, which are detailed in the Outlook section of the Company’s Q1 2018 MD&A, available at www.dhxmedia.com, on www.sedar.com or http://www.sec.gov/edgar.

DHX Media Management will hold a live webcast and presentation with slides for analysts and investors on November 14, 2017 at 8:00 a.m. ET, at the following address: https://edge.media-server.com/m6/p/76cbytcz. 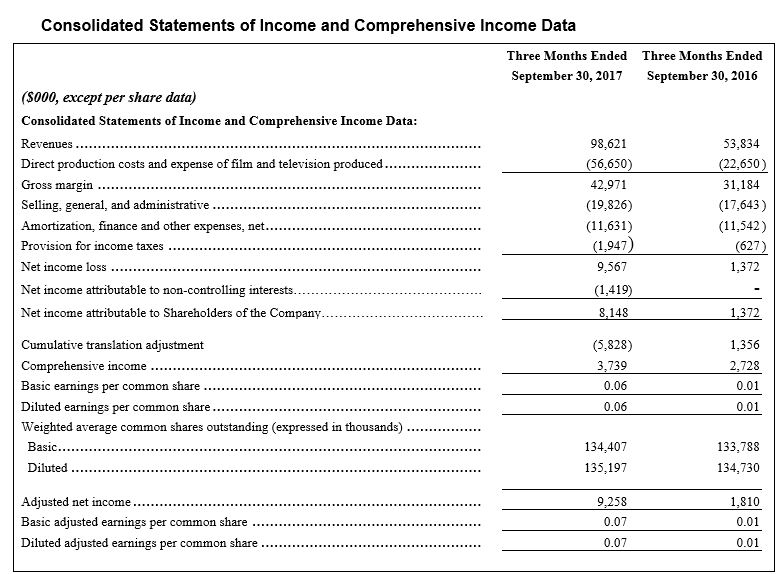 Proprietary production revenues: Proprietary production revenues for Q1 2018 were $2.52 million (all organic), a decrease of 28% compared to $3.50 million for Q1 2017. For Q1 2018, the Company added 11.0 proprietary half-hours to the library, down 69% versus 35.0 proprietary half-hours for Q1 2017. The Company had expected to deliver 13 half-hour episodes of Supernoobs-Season 2 during Q1 2018, but delivery was delayed slightly; these 13 half-hour episodes will be delivered and the revenue recognized during the remainder of Fiscal 2018. For Q1 2018, the Company added 12.0 half-hours of third party produced titles with distribution rights (Q1 2017 – 27.0 half-hours), a decline of 56%. Third party produced titles with distribution rights are an example of the operational synergies associated with owning DHX Television; a number of such titles are now generating significant distribution revenues for the Company.

Consumer products-owned revenues (including live tour revenue, music and digital royalties): For Q1 2018, the consumer products-owned revenues were $36.21 million (6% organic, 94% acquisitive), up 828% as compared to $3.90 million for Q1 2017, a direct result of the acquisition of the Peanuts and SSC. Management is very pleased to report that both Peanuts and Strawberry Shortcake performed in-line with our expectations, accounting for the acquisitive growth in consumer products owned revenues. As noted in the 2017 Annual MD&A, the Teletubbies have not yet gained sufficient traction in the US market; accordingly, the expected consumer products revenues have been slow. Management continues to be pleased with the performance of the Teletubbies in the UK and is optimistic about the early indications for the Teletubbies in both Germany and China. For Q1 2018, the Company recognized live tour revenues of $0.20 million versus $0.65 million for Q1 2017.

Consumer products-represented revenues: For Q1 2018, consumer products-represented revenues were down $0.89 million, or 15%, to $5.01 million (all organic) compared to Q1 2017 at $5.90 million, as revenues from Despicable Me and Minions, which benefited Q1 2017, have now tailed off. When considering the expected declines from Despicable Me and Minions, Management was generally pleased with the performance of its portfolio of represented brands, including Sesame Street, Dora the Explorer, and Hatchimals in certain territories. Management remains optimistic about the future prospects for and operating leverage provided by CPLG, as Management has already begun to convert third party agencies for Peanuts and Strawberry Shortcake, having announced the immediate conversion of Peanuts in the Middle East and the pending conversions of Peanuts in the UK and France effective January 1, 2018.

The Company groups proprietary production, distribution (including WildBrain), and consumer products-owned into a single Proprietary Content Gross Margin for the purpose of providing analysis of gross margins.

SG&A costs for Q1 2018 increased 12% to $19.83 million compared to $17.64 million for Q1 2017. SG&A includes $1.19 million (Q1 2017-$1.29 million) in non-cash share-based compensation. When adjusted, cash SG&A at $18.64 million increased 14% as compared to $16.35 million for Q1 2017, a result of the additional SG&A costs from the acquisition of Peanuts and SSC. As previously communicated, Management is in the process of reviewing and reducing SG&A expenses across the Company and expects quarterly cash S&A to decline throughout Fiscal 2018, while continuing to drive growth in WildBrain and ensuring a smooth integration of Peanuts and SSC.

For Q1 2018, Adjusted EBITDA attributable to DHX Media was $22.79 million, up $7.96 million or 54% over $14.83 million for Q1 2017. Please see the “Use of Non-GAAP Financial Measures” and “Reconciliation of Historical Results to Adjusted EBITDA” sections of the MD&A for the definition and detailed calculation of Adjusted EBITDA.

Disclaimer
This press release contains “forward looking statements” under applicable securities laws with respect to DHX Media including, but not limited to, statements regarding the integration of the acquisitions of Peanuts and Strawberry Shortcake and the expected financial and other impacts associated with such acquisitions, including synergies, cost reduction initiatives and the resulting financial and other impacts associated with such initiatives, the timing of production schedules and deliveries, expectations regarding the growth and financial performance of WildBrain, expected benefits associated with the Company’s agreement with Mattel, the performance and growth of the Teletubbies brand, management’s review of strategic options for promotion and advertising on DHX Media’s television channels, the strategic priorities of the Company, the markets and industries in which the Company operates, the Company’s plans for deploying its cash flow, strategic plans for growing the Company’s consumer products business, the impact of the Company’s production activities on its distribution and consumer products businesses, the business strategies and operational activities of DHX Media and its subsidiaries, and the future growth and financial and operating performance of DHX Media, its subsidiaries, and investments, including annual growth and other financial targets. Although the Company believes that the expectations reflected in such forward looking statements are reasonable, such statements involve risks and uncertainties and are based on information currently available to the Company. Actual results or events may differ materially from those expressed or implied by such forward looking statements. Factors that could cause actual results or events to differ materially from current expectations, among other things, include delivery and scheduling risk associated with production and distribution revenues, the Company’s ability to execute and close anticipated licensing transactions, the Company’s ability to effectively integrate the Peanuts and Strawberry Shortcake acquisitions and realize synergies associated with such acquisitions, the Company’s ability to execute and realize on expected cost reduction initiatives, customer response to properties and brands of the Company and the risk factors discussed in materials filed with applicable securities regulatory authorities from time to time including matters discussed under “Risk Factors” in the Company’s most recent Annual Information Form and annual Management Discussion and Analysis, which also form part of the Company’s annual report on Form 40-F filed with the United States Securities and Exchange Commission. These forward-looking statements are made as of the date hereof, and the Company assumes no obligation to update or revise them to reflect new events or circumstances, except as required by law.